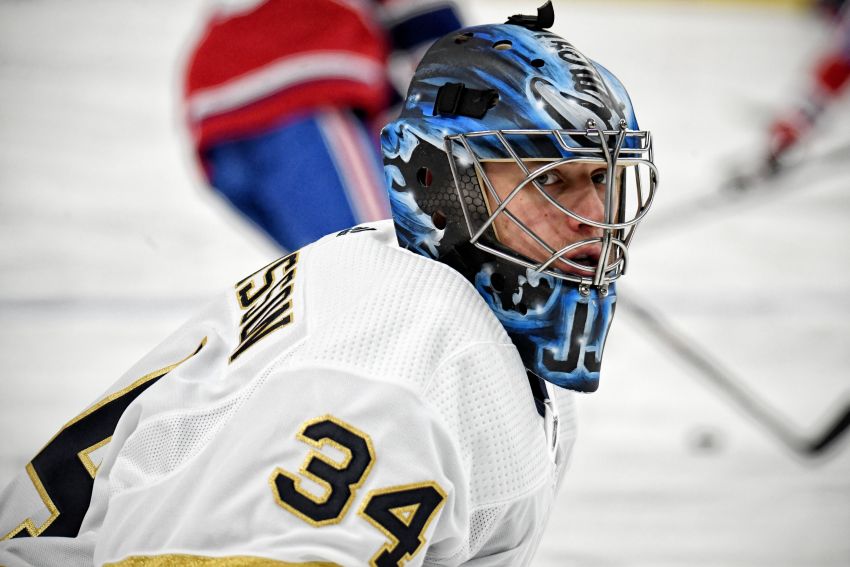 BUFFALO – In what has become another dreary season, goalie Jonas Johansson’s first NHL start tonight offers the Sabres some freshness.

While Ukko-Pekka Luukkonen has been tabbed the Sabres’ goalie of the future, Johansson has developed into a strong prospect.

Coach Ralph Krueger said he hopes Johansson’s presence helps the Sabres settle down and “think about our game tonight and to play within that game more consistently.”

“Often when you have a young player starting his first National Hockey League game, it’s definitely an opportunity for us to work hard to stay consistent with that game, which is what we’ve been lacking since the break, is just consistency within the game which makes us strong, which makes us difficult to play against, which takes away the space of teams,” he said inside KeyBank Center.

“Detroit has a lot of speed, they work hard as a group. We need that game here today, and hopefully with Johansson in goal the guys just tighten that game up right through from the first to the last minute.”

Johansson relieved Carter Hutton in Tuesday’s ugly home loss to the Colorado Avalanche, stopping 13 of the 14 shots he faced in his NHL debut.

After Colorado scored on its first shot, Johansson settled down.

“I got a taste of it a little bit, so it’s a positive thing, for sure,” Johansson said. “But that’s in the past now, too, it’s a new game today, new performance that we got to have. So I just left that game behind and focused on the next one.”

The Red Wings are downright awful, perhaps the worst team since the NHL implemented the salary cap in 2005.

Imagine how surly the crowd could become tonight if the Sabres fall behind or lose.

The Red Wings have lost nine straight games (0-8-1). They have a minus-96 goal differential!

“We have a lot of respect for the potential of the group,” Krueger said. “They’ve had a tough run of late. But what we do see if there’s a danger in their game and in their ability to take advantage of teams if you give them that space.”

Meanwhile, center Johan Larsson will return after an upper-body injury shelved him for Tuesday’s 6-1 loss to the Colorado.

Krueger said the Sabres will dress 12 forwards and six defensemen tonight. Defenseman Zach Bogosian will be a healthy scratch.

Thirteen forwards will warm up, including Scott Wilson, who was recalled from the Rochester Americans on Wednesday. Wilson, 27, recorded three goals and four points in five contests after the Sabres sent him down following a two-game recall last month.

Krueger said center Curtis Lazar, who has been out sick, was being evaluating this morning.

“It was more what Wilson has been doing in Rochester, he’s really on a hot streak right now,” Krueger said. “Just the way he has been playing has really impressed us. We sent him down with a to-do list, and it was less against J-S than we don’t have a lot of movement right now here within the guys that are set here, and we just feel that he has the potential to be a spark plug for us right now.”

New for @TBNSports: #Amerks goalie Jonas Johansson has morphed from an unheralded #Sabres prospect in the ECHL into #Rochester‘s rep in @theahl All-Star Game.

More on the Swede’s growth and updates on UPL and Andrew Hammmond:https://t.co/2apF0v6xm8