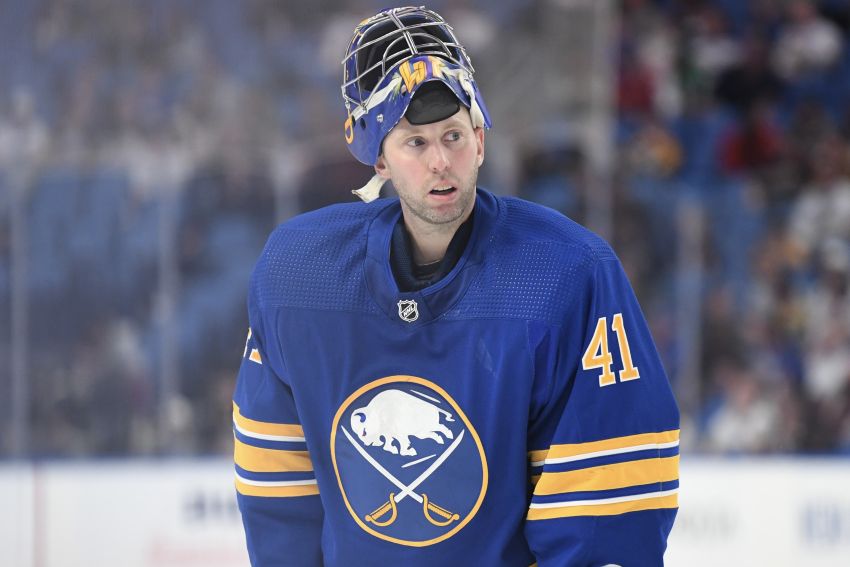 Craig Anderson is in his first season in Buffalo. ©2022, Micheline Veluvolu

BUFFALO – When the Sabres signed a slew of cheap free agents to one-year contracts last summer, it appeared their tenures here would be short.

After a season or less, they might become expendable. Some of organization’s prospects would mature and the rebuilding Sabres might also acquire better talent.

Well, so far, some prospects – defenseman Casey Fitzgerald and Mattias Samuelsson, for example – have graduated from the minors and earned regular duty. Others like goalie Ukko-Pekka Luukkonen and winger Jack Quinn have looked so impressive in limited action they could be close to cracking the NHL.

Meanwhile, wingers Peyton Krebs and Alex Tuch arrived from the Vegas Golden Knights and solidified themselves as cornerstones of the Sabres’ future.

In just six months, the roster has dramatically improved, and fewer spots will be available next season.

Still, some veterans the Sabres inked – perhaps goalie Craig Anderson, defenseman Mark Pysyk or winger Vinnie Hinostroza – could have a future in Buffalo, even if the Sabres trade them before Monday’s deadline.

While general manager Kevyn Adams did not name anyone, he told the Times Herald on Wednesday the Sabres would be open to re-signing some if they get dealt.

“I have had many different conversations, not just with the agents, but with our players directly, sitting down and just discussing and saying that if we did move whatever player and we may potentially look to bring them back, if they want to be back, if they were free agents,” Adams said. “To make sure they knew we have a job to do.”

Of course, the value of keeping some veterans for the final 20 games – the Sabres have eight players set to become unrestricted free agents – might outweigh whatever return they receive in a trade.

“There’s guys on our team that have taken big steps maturing their games,” Adams said. “Then there’s players that are part of that we really see as a big part of the future that aren’t here yet. So you think about that.

“In saying all that, you need to make sure, especially the young players, that you’re surrounding them with really quality people and players. And that was why we targeted certain players last summer.”

Anderson has established himself as the Sabres’ backbone and one of their strongest voices. Even at 40, it appears he can play next season if he wants to keep going.

In a seller’s market, with a dearth of proven netminders available, Anderson could be coveted by a playoff team.

Adams said he sat down with Anderson on Tuesday and discussed the American’s future with him.

“I feel that it’s really important in my role when you have a situation like this to be open and honest, to have dialogue back and forth,” Adams said. “I wanted to hear from him exactly what he thought, I want to make sure he understood my position. I believe when you’re in these type of situations, as an organization, we want to always do everything first class. We want to do things the right way, we want to treat people the right way.

“Craig has been very, very impactful and important on our group this year for obvious reasons, what he’s done on and off the ice. But he’s also had a tremendous career, and I think you have to be respectful of that. So I’ll keep the details of it out, but he knows and I know exactly how each other feels, and it was a really good conversation.”

The affable Pysyk, 30, has become a popular teammate again in his second stint with the Sabres. Coach Don Granato often awards him an ‘A’ when one of their alternate captains is injured, so like Anderson, he has become a major part of their leadership group.

Defensemen are always at a premium, especially right-handed shots, so Pysyk could be in demand before the deadline. Entering Friday’s road game against the Calgary Flames, he had averaged 18 minutes, 15 seconds of ice time a game this season.

Hinostroza, 27, can play up and down the lineup, and might have a future as third-liner with the Sabres. He had 10 goals and 21 points in 41 games this season entering Friday, essentially a 20-goal, 40-point pace for just $1.05 million.

The prospect played twice for the Amerks earlier this month before he aggravated the lower-body injury he suffered Jan. 20 in Buffalo.