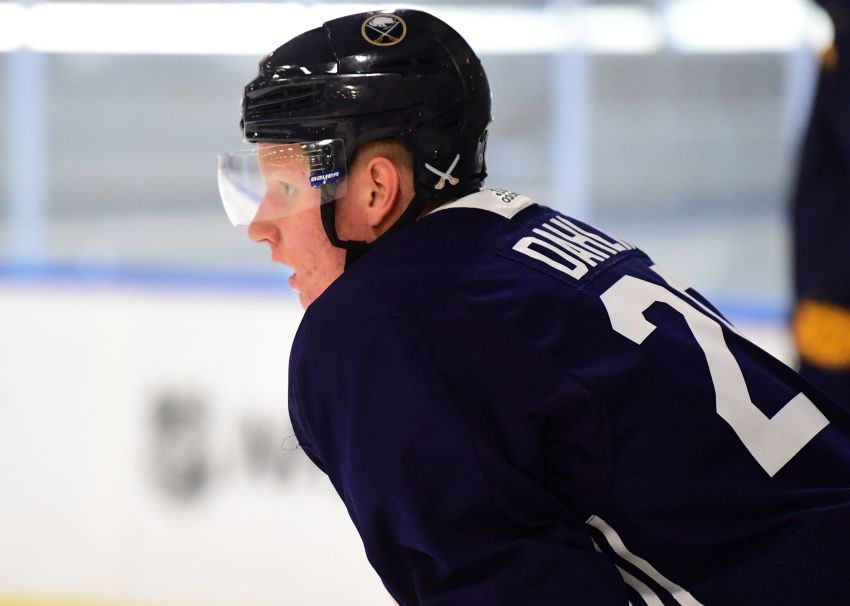 But Dahlin, 18, isn’t taking anything for granted. He sometimes talks about if he makes the Sabres. He said it again Friday after his first official NHL practice.

To Sabres coach Phil Housley, a Hall of Fame defenseman, Dahlin possesses the proper attitude to make him successful amid a tremendous amount of hype.

There has been some intrigue over which defenseman Housley would pair Dahlin beside right away. Given the slick Dahlin is a left-handed shot, Zach Bogosian and Rasmus Ristolainen, two righties, seemed like prime candidates.

But Housley put Dahlin beside Jake McCabe, whose 2017-18 season ended in February after undergoing shoulder and thumb surgeries.

McCabe said of Dahlin: “He’s one of those guys that’s going to push me and make me a lot better player. I’m going to try to help along with the North American game and talk to him as much as I can.”

McCabe, 24, hasn’t played a game since Feb. 6. While the American established himself as a versatile and underrated presence in his first two full seasons, he struggled last year, compiling three goals, 12 points and a minus-11 rating in 53 contests.

When McCabe broke his thumb in early February, the last-place Sabres decided he should have his nagging shoulder injury repaired.

“It’d been lingering for a couple years,” McCabe said of his shoulder. “It was kind of … like, do I rehab my thumb and come back for 10 games but then maybe not be ready for training camp? I was kind of weighing the pros and cons and ultimately we all felt like it was the right decision for me to be 100 percent for training camp.”

McCabe said he had some “jitterbugs” entering Friday’s practice.

“It’s my fifth year going into training camp, but I was just as excited, probably even more than my first, because it has been that long,” he said. “It’s nice to be here 100 percent healthy. It was unfortunate last year, the series of events, but it’s in the past.”

In the past, the Sabres’ defense depth has often been weak. But this training camp, perhaps 10 or 11 players are competing for spots. A strong camp could lock youngster Brendan Guhle into a spot. Veteran Matt Hunwick offers depth. Newcomer Lawrence Pilut gives them an intriguing talent who excelled in Sweden.

“You go seven, eight, nine deep, every single guy can be put in the lineup at one point or another and contribute and skate,” McCabe said. “That’s something that we’ve lacked in the past. It’s really exciting that we have that depth this year.”

Even with more options, Housley figures to rely heavily on Dahlin this season. Before that, however, Housley said Dahlin “is going to get a lot of action” during the preseason.

Opponents, of course, will be keying on him.

“There’s going to be guys that challenge him,” Housley said. “He’s got a lot of competitive fire and competitive spirit and he’s going to want to do well and make an impression.”

After months and months of hearing about Dahlin, he was finally on the ice Friday in a full-fledged NHL practice. The pace of the session was something he had never experienced.

“He’s just trying to get adjusted to another level of speed,” Housley said. “So he’s done a terrific job in that regarding his preparation. He loves the game, loves to compete.”