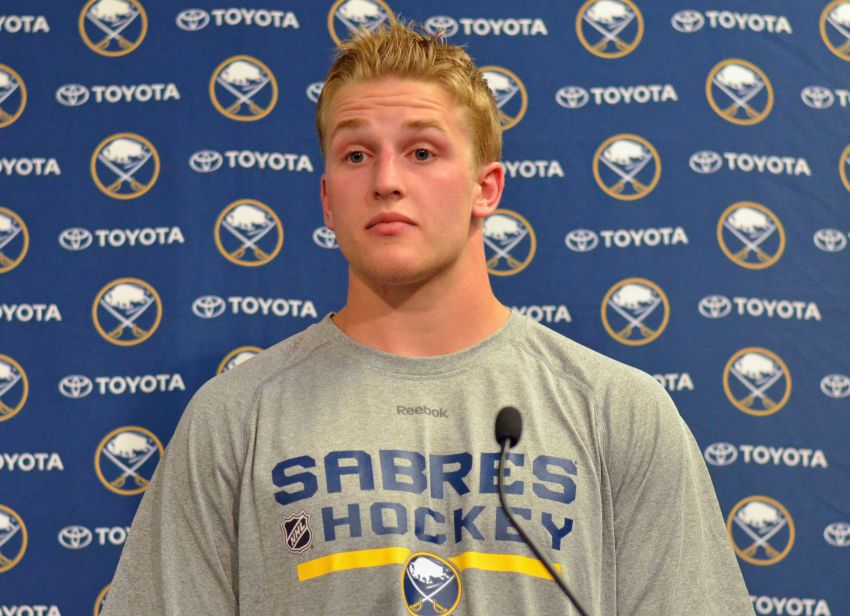 BUFFALO – The Sabres rookies took different paths from college to the NHL.

Winger Hudson Fasching decided last year he would turn pro following his junior season. Meanwhile, defenseman Casey Nelson wasn’t sure a month ago if he would leave school after three seasons.

Of course, Fasching, 20, was supposed to here. The power forward’s stock steadily rose at the University of Minnesota after Los Angeles drafted him in 2013.

The undrafted Nelson, who called himself a “late bloomer,” struggled early on at Minnesota State University. Nelson, 23, decided around Christmastime he would stay in school before changing his mind and finding a bundle of teams wanted his services as a free agent.

While their roads here were different, both signed entry-level contracts this week and will likely stick for the final eight games. The youngsters had their first team practice this morning inside the First Niagara Center.

Sabres coach Dan Bylsma wanted to wait another day before saying if the rookies would play Saturday afternoon against the Winnipeg Jets. Bylsma said it’s easier to jump in as a winger, although he cautioned one player isn’t ahead of the other.

Clearly, both Fasching and Nelson felt nervous on the ice today.

An excited Fasching added: “It was really exciting, a little bit of nerves out there. But all in all, just a fun day. It was good to be out on the ice with the guys.”

“I’ve been learning systems rapidly over the last couple days here,” Fasching said. “I’m (here) to soak it all in – everything from systems, where to put my dirty laundry almost.”

He added: “Everything’s a step up here. It’s another level, another speed. It’s quality. Everything’s new and everything’s different.”

The last several days have been a whirlwind for Nelson, who picked the Sabres on Sunday before officially signing his deal Tuesday.

Why did Nelson choose the Sabres? He said he saw an opportunity on the depth chart, liked the coaching staff and loves Buffalo, where he once played in a tournament.

“I think it was just a great fit for me,” Nelson said.

Still, he didn’t know much about the Sabres.

So how did the 6-foot-2, 182-pound Nelson morph from an undrafted unknown to a coveted prospect? Some very rapid development.

Nelson’s defense improved each season, he said. His greatest asset is his skating.

Fasching, who scored 20 goals this season, skated on the right wing beside center David Legwand and Matt Moulson. Nelson skated beside Carlo Colaiacovo.

Check back later for much more on the rookies.

In other news, Bylsma said goalie Robin Lehner (ankle) has been rehabbing and working out off the ice and will see the team doctors Saturday.

– Winger Tyler Ennis, out with a concussion since Dec. 30, skated on his own and worked out today. Bylsma said he’s doing better and could possibly practice with his teammates “sooner than later.”