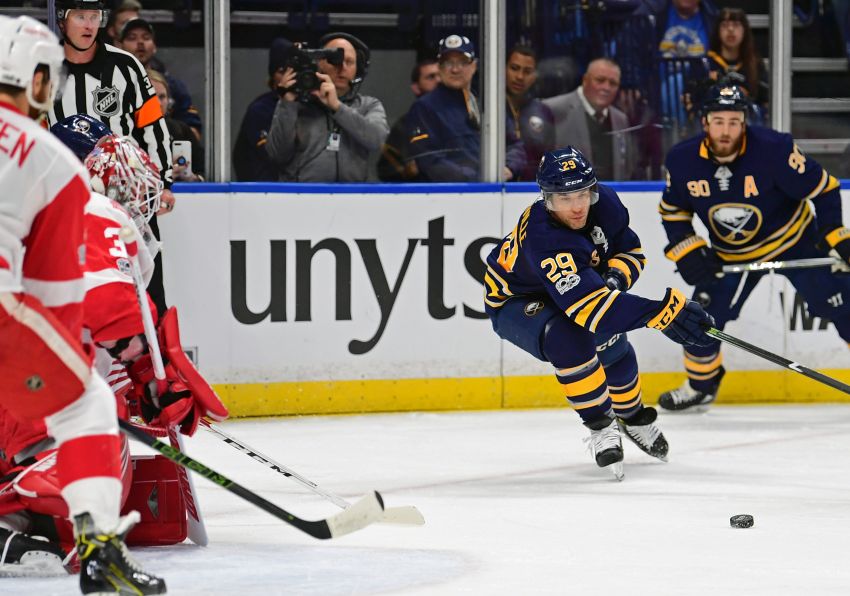 BUFFALO – Jason Pominville sounded a little nostalgic recalling some special memories from his first stint here. Occasionally, when the Sabres winger watches a memorable goal on Youtube.com, the passion he sees from fans in the clips wows him.

After the Dallas Stars pummeled the Sabres 7-1 at home Jan. 20, they transformed into a tight five-man attack last week, outscoring their opponents 11-1 on the road while showcasing some much-needed tenacity.

Sure, the Sabres still own the NHL’s second-lowest point total (37). But over the weekend, Pominville was reminded how much excitement a few victories can generate throughout the community.

“People were like, ‘Oh, great job this week, this road trip you guys were awesome,’” Pominville said. “So that’s how it is. They’re pretty passionate and they like it and hopefully we can give them a little more.”

The Sabres especially want to give their fans more at home, where they’ve been downright awful at times this season. They’ve won a league-low six home games (tied with the Arizona Coyotes) in 21 tries (6-12-3).

It’s now commonplace for surly fans beaten down by years of losing to boo the Sabres off the ice.

Tonight kicks off a five-game home stand for the Sabres. They play nine of their next 11 games here and close the season with 20 of their final 33 contests at KeyBank Center.

If the Sabres want to climb up the standings, they must morph into a strong home team. They have a terrific opportunity over the next two months.

In Pominville’s early days, when the Sabres ranked among the NHL’s heavyweights and made two consecutive Eastern Conference final appearances, most opponents detested coming into Buffalo’s raucous rink.

“This place can be a fun place, the building gets loud,” Pominville said. “I think we’re missing out on a lot as far as how loud this place can be and how passionate the fans are and how involved they are with us when we’re winning hockey games.”

Sabres coach Phil Housley added: “Fans have come and supported us all year. But when you’re winning in Buffalo, it’s unbelievable. The fans are behind you. When you can be a physical team, be a tenacious team, a team that gives a great effort night in and night out, I think that’s what they’re looking for. And if you do that, you’re going to get results.”

To winger Kyle Okposo, the Sabres took a strong first step – “Put a few games together where we really kind of showed what we can do,” he said – last week.

“Now we got to take another step, we got to come back home and we got to be good on home ice,” he said. “We kind of set a goal for the rest of the year we wanted to hit. We got to start better on home ice and defending our building.”

The Sabres, who have a wretched minus-49 goal differential this season, defended well in beating the Calgary Flames, Edmonton Oilers and Vancouver Canucks. Incredibly, they haven’t allowed a goal since the Flames scored 8:00 into last Monday’s 2-1 overtime win.

How did the Sabres, who haven’t won four consecutive contests since December 2014, change so quickly?

“We had a total buy-in, I think,” Okposo said. “We had a total urgency to keep the puck out of our net. We just reloaded and we worked. Anytime the possession was in question or we thought they might have a chance going the other way, everybody got back. When we did that, we were able to break out of our own zone really easily. It started with our defense.”

“We started playing defense and understood it started in the other end of the ice,” Lehner said. “The amount of work our forwards did over the last three games was incredible, just them coming back so hard and making it easy for our D, making it easy for me. We were defending with three, four five guys. It makes a big difference.”

He added: “It’s hard to fall apart with five guys playing together. … We haven’t been those layers. We’ve been one layer. When that layer breaks, it breaks totally.”

Lehner believes the Sabres must take the same approach they did on the road last week.

“There’s no magic to our game. We didn’t do anything spectacular. I didn’t stand on my head, a guy didn’t play by himself. It’s about every single one of us doing our job.”