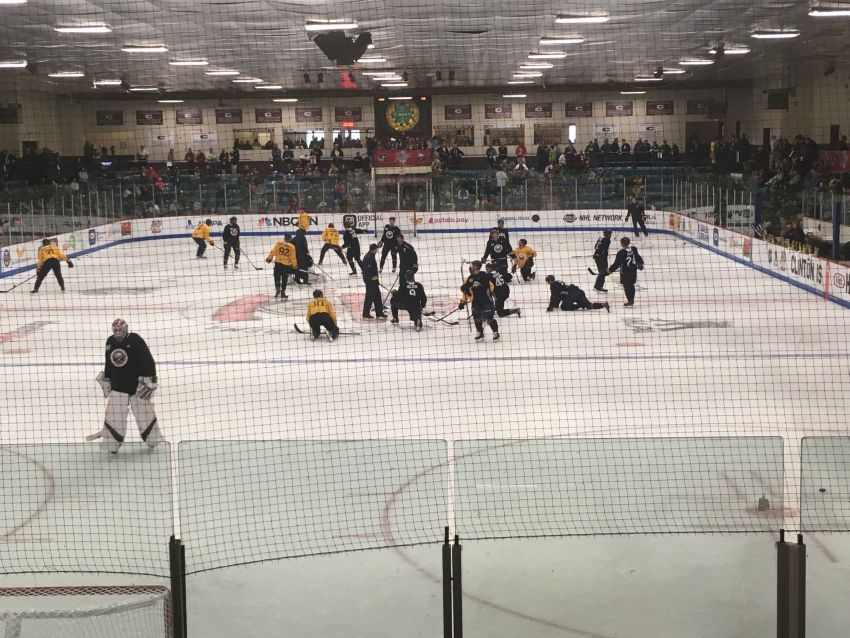 CLINTON – When center Casey Mittelstadt told some of his teammates skating this morning inside tiny Clinton Arena this felt like high school, he said they starting making fun of him.

But Mittelstadt, 19, is less than two years removed from playing high school hockey. Memories of skating in old rinks like the 65-year-old barn where the Sabres will face the Columbus Blue Jackets in tonight are fresh.

“It makes for a good morning skate,” Mittelstadt said after the Sabres prepared for tonight’s Kraft Hockeyville preseason tilt.

This village of about 1,900 in Oneida County, which won the game and $150,000 in rink upgrades, is clearly jazzed to be hosting an NHL exhibition game. It looked like nearly everyone in town showed up to the morning skate. Fans greeted players in the rain as they entered the building and watched the teams practice as music blared.

“I think it’s great,” Sabres coach Phil Housley said of playing a game in such a unique place. “It just brings you back to your childhood memories. Guys are sitting in the locker room there and they’re all tight, we’re doing our meetings. It was a great feeling, because you draw back from that when you were a kid playing with your buddies.”

Sabres defenseman Zach Bogosian grew up in Massena, about a three-hour drive north. While he has never played in Clinton Arena, he played against teams from Clinton growing up. Riding the bus from the airport in Rome took him back to his childhood.

The ice surface, of course, isn’t exactly regulation. Housley said the ice was good but a little bumpy. The corners are square, so players will have to adjust.

“Any shot is going to be a good shot tonight,” Housley said.

The Sabres, who flew here this morning, brought a strong lineup. The game being on national television might have something to do with that.

Scott Wedgewood will start in goal and be backed up by Jonas Johansson.