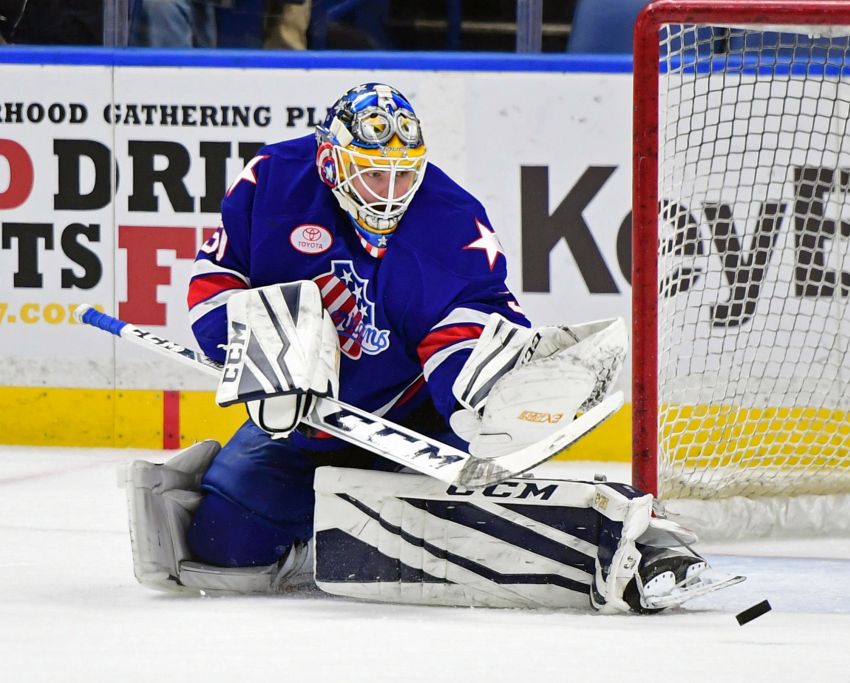 Ullmark’s numbers won’t wow you. In an AHL-high 55 games, the Swede’s 2.87 goals-against average ranked 31st in the league. His .909 save percentage ranked 24th.

But Ullmark, 23, tended goal for a sixth-place club with a porous defense. He faced a league-high 1,678 shots – 31 a contest and 136 more than any other goalie – in his second North American campaign.

“Our first probably 25 games, if it weren’t for Linus, I don’t know how many wins we would’ve had,” coach Dan Lambert said Friday after Ullmark’s 30-save performance in the Amerks’ 5-4 win against the Albany Devils inside Blue Cross War Memorial. “He was literally standing on his head.”

“Without his game … it would’ve been a really tough season,” Lambert said.

“His trajectory, playing two or three years in the Swedish Elite League, winning goalie of the year there, coming here now and playing two years in the American Hockey League, he’s taking the same track that many, many, many starting goalies have taken,” Murray said.

The 6-foot-4, 215-pound Ullmark might graduate to the Sabres next season, perhaps as Robin Lehner’s backup. Of course, Ullmark could also draw interest from the Vegas Golden Knights in the upcoming expansion draft.

Ullmark said he hasn’t thought about making the jump yet.

Whatever happens, the heavy action Ullmark received helped prepare him for the NHL. He had never played more than 48 games in a season or 35 with one club.

“The workload has been a lot, so that’s been a new experience for me, just to be able to play 50-plus games,” Ullmark said. “I was aiming for 60. Some call-ups got in the way, unfortunately. But other than that, I’ve just been trying to develop my game off and on the ice all day long, just don’t rush anything, take my time, don’t think that’s it’s going to happen right now. It’s going to bear fruit in the long run.”

Naturally, Ullmark felt the effects of the workload.

“Worst is probably the toll on your body, that you’re always feeling tired a lot,” he said. “So there’s no problem sleeping at night, that’s for sure.”

But playing so often also offers some advantages. Ullmark said it allowed him to lose any “hesitation” in his game.

“You get the chance and opportunity almost every night, so if there’s something that’s been bugging you, you can always go in there and readjust it and don’t have to think about it for one, two or three weeks,” he said.

Ullmark said this season turned into what he thought his rookie year would be like. He stayed put in Rochester and adapted his game to the North American style.

A year ago, after only three AHL appearances, the Sabres summoned Ullmark because Lehner hurt his ankle. Ullmark wound up playing 20 NHL games, often looking like a future No. 1.

Still, he struggled after returning to Rochester halfway through 2015-16. Now, after a full season in the minors, he said his timing and ability to read the play have improved.

“I always knew that I had the speed and the skills, but it was just a matter of timing and being able to use my skills to my advantage,” Ullmark said.

Ullmark displayed those skills in the Sabres’ 3-1 season-ending road loss in Tampa Bay on April 9. His only appearance with the Sabres this season showed him he has “been doing the right things down here.”

“I’m happy I got the chance to play at least one game this year and show that I can play in that league and I don’t have to second-guess anything,” he said.

Ullmark might have a full-time job in that league next season.