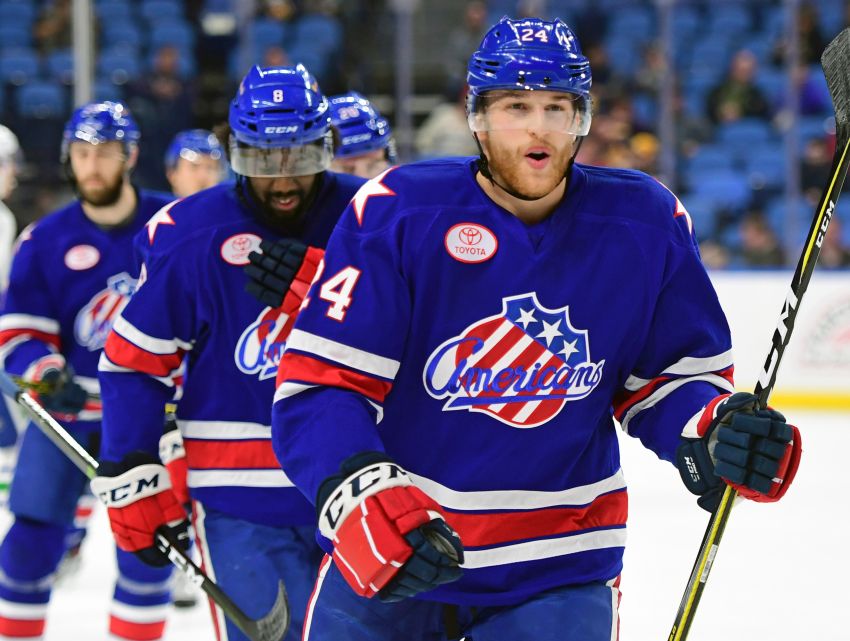 “I was like, ‘Is this right?’” a smiling Fasching said after scoring early Wednesday inside KeyBank Center. “Like, I don’t feel like I’m supposed to have the puck here.”

Late in the first period of the Rochester Americans’ 3-2 overtime win, Paul Geiger’s shoot-in attempt bounced out front instead of ringing around the boards, leaving Utica Comets goalie Richard Bachman out of position.

Fasching, who has battled a groin injury for months, buried the puck into an open net from the edge of the slot.

“I thought there was going to be a whistle and they were (going to say), ‘No, it’s not a goal,’” said Fasching, who has only played 18 AHL games.

But the goal counted, just Fasching’s fourth in what has become a frustrating rookie season. Fasching, 21, hadn’t scored since Jan. 25.

“I haven’t had one that easy in a long time,” he said. “It really helps to get the confidence going. … It feels pretty good to get the monkey off my back.”

It feels like ages ago, not barely four months, that Fasching’s impressive training camp forced the Sabres to keep him.

When they sent Fasching down for two games in late October, his dominance wowed Amerks coach Dan Lambert.

The Sabres recalled Fasching, and he hurt his groin Oct. 30 in Winnipeg, his last NHL outing. Fasching sat out four games before he was sent to the Amerks.

Lambert said Fasching hasn’t been skating like he was earlier this season.

So what else has contributed to Fasching’s tough campaign?

“It’s his first year, he starts in the NHL, now he’s thinking, ‘OK, I’m an NHLer,’” Lambert explained. “It’s the mind games of, ‘Oh my gosh, I’m in the minors and now other guys are getting called up.’ I think he had some of that going on as well.”

Fasching said he felt good after returning last month but has “kind of dropped off.”

“I don’t want to make excuses,” said Fasching, who played seven NHL games late last season after leaving college. “It’s been there. (The injury is) always in the back of your head, especially. You try to do your best to ignore it and keep playing through it.”

Fasching said he’s trying to get back to the “details” that have made him successful.

“He’s a great young man that’s going to find his way,” Lambert said. “How has he handled it? There are times when it’s been hard on him, there’s no doubt. In saying that, I believe he’s going to have a great last 24 games of the season.”