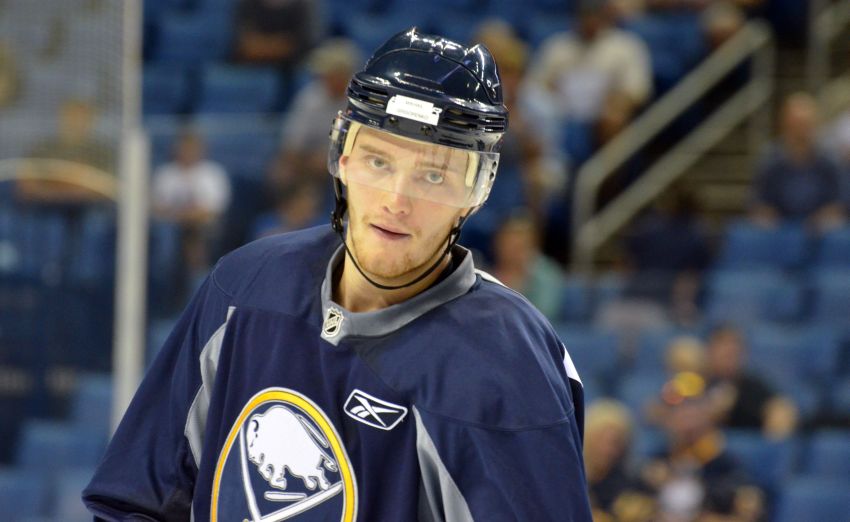 Luke Adam, Marcus Foligno and Brayden McNabb, who all impressed during NHL stints last season, are in town working out. So is Grigorenko, the 12th overall pick last month, and 14th pick Zemgus Girgensons, who inked his entry-level deal last week.

Whenever training camp begins, the youngsters should be competing for permanent NHL spots. It promises to be interesting.

“You start looking at the depth, you have a lot of confidence organizationally that these guys will be not only playing in the NHL, but be playing for a long period of time,” Regier said.

Grigorenko, a player many pegged as the 2012 NHL Entry Draft’s most talented, could be the Sabres’ No. 1 prospect. All eyes will be watching him as he guns to become the team’s first regular 18-year-old since Pierre Turgeon in 1987-88.

Regier said Grigorenko will be given “every opportunity” to make the big club. But don’t expect Grigorenko to be skating five minutes a night on the fourth line for the Sabres.

“In Mikhail’s case, it will be driven by him, driven by training and exhibition games and a sense of where he fits and how he fits, and not just the opportunity, but we have a responsibility and an obligation to put him in a position to succeed – not just on the short-term, but the long-term as well,” Regier said.

Grigorenko’s unsure if he’s ready for the big leagues. He received a small taste by competing against a handful of players with NHL experience at the team’s summer development camp last week.

“I don’t know if I feel ready because I’ve never played against NHL players,” Grigorenko acknowledged. “I mean, in development camp there was some guys from (the) NHL. I think I’m in real good shape now and getting better and better. I hope in camp I’ll be able to compete with the guys.”

Why does Regier think Grigorenko could possibly play in the NHL immediately?

“First is his size, his skating ability, his skill level,” he said. “I think with younger players … when you have the things that he has, the biggest things revolve around the maturity level, that individual on the ice, that ability to think the game. You’re now playing against men. You have to compete for the puck at a very high level and a consistent level.

Naturally, signing an NHL contract – Grigorenko got the maximum rookie deal – excited Grigorenko, who probably could’ve made millions more playing at home in the KHL.

“Now I feel like I’m 100 percent part of the organization,” he said.

The NHL has always been first on Grigorenko’s radar. He moved to Quebec City last year with his mother and took English lessons for three hours a day while compiling 40 goals and 85 points in 59 games with the QMJHL’s Remparts.

“It wasn’t any competition,” Grigorenko said about the NHL and KHL. “Before the draft (the KHL) just wanted me to know they’re interested in me, and they asked me what I feel, like what I want to do. … I said, ‘I’m sorry, I want to be an NHL player.’ … For now, I can’t even think about the KHL.”

Grigorenko should be playing for one Russian team soon, however. He plans to join his country’s world junior championship camp next month. Four exhibition games are on the slate.

Regier on signing players for the AHL: “We are filling up quickly in Rochester. If we sign another player, it probably is just one, maybe two. We’ve got a pretty strong, full roster there.”

Roy, the son of Hall of Fame goalie Patrick Roy, participated in the team’s development camp. He had 92 points playing beside Grigorenko with the Remparts last season.

If there is a lockout – the collective bargaining agreement expires Sept. 15 – the Sabres would send some NHL players on entry-level deals to Rochester.

“We’ll continue to negotiate through the week here,” Regier said about the players.