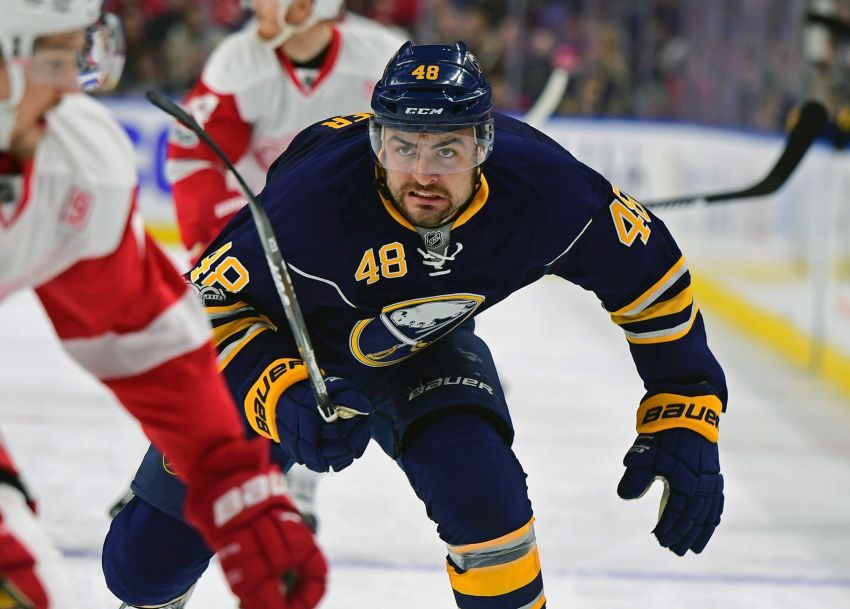 CHICAGO – In the end, the Buffalo Sabres exposed winger William Carrier to the Vegas Golden Knights and sent the new club a sixth-round pick to lay off goalie prospect Linus Ullmark in the NHL Expansion Draft.

That price, of course, will look like a pittance if Ullmark, who was left unprotected, becomes Buffalo’s starter someday.

The Golden Knights officially selected Carrier on Wednesday night, about the same time the Sabres sent them the pick in this weekend’s draft, according to reports.

When the Sabres left Carrier unprotected earlier this week, it was widely assumed the Golden Knights requested the 22-year-old as a favor.

In exposing Carrier, the Sabres lost the last piece of the Ryan Miller trade with the St. Louis Blues in 2014.

Carrier, a mix of skill and grit, quietly developed into one of the Sabres’ top forward prospects. He morphed into perhaps the team’s biggest surprise after getting recalled early last season, scoring five goals and eight points in his first 41 NHL games. The former second-round pick even earned some regular duty on a scoring line.

Every team lost one player to the Golden Knights, although with so many side deals, many clubs sent notable assets to Vegas to keep players.

Following an AHL All-Star season, Ullmark could graduate to the Sabres in 2017-18. The 23-year-old made one NHL appearance last season and has played 21 contests over his two North American campaigns.

The Sabres’ last sixth-round pick to play more than one game for them is, coincidentally, Ullmark, a 2012 selection.

Sabres goalie coach Andrew Allen will be retained by new coach Phil Housley, according to Sportsnet’s Elliotte Friedman. The Sabres let go the rest of former coach Dan Bylsma’s assistants, according to The Buffalo News.

Housley was close to adding former New York Islanders coach Jack Capuano to his staff, according to Friedman, but Capuano may be going somewhere else, he reported.

The Sabres’ home opener will be Oct. 5, a Thursday, against the Montreal Canadiens, the NHL announced Wednesday. The Sabres visit the New York Islanders for their home opener Oct. 7. The full 82-game schedule will be released today.