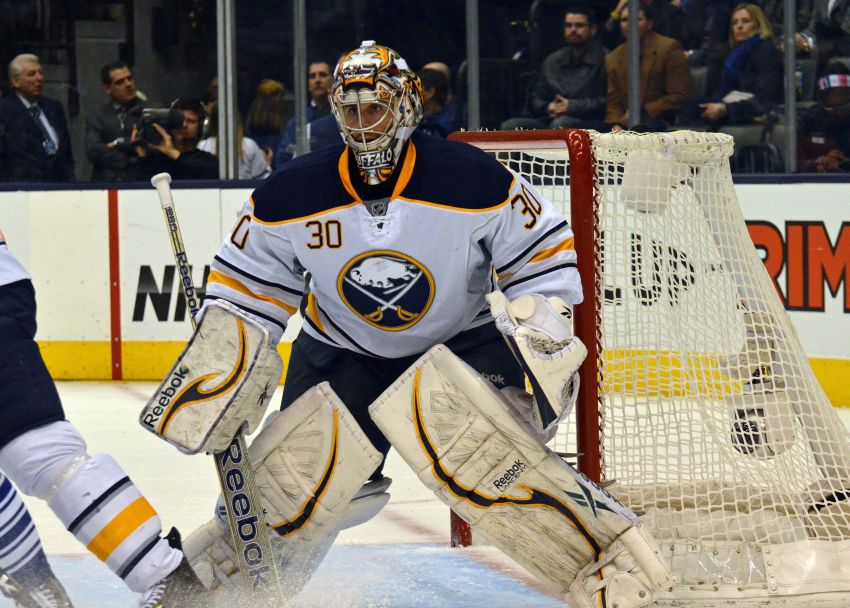 PITTSBURGH – Despite one win in 15 starts this trying season, it appeared Buffalo Sabres goalie Jhonas Enroth would get Monday’s nod inside the Consol Energy Center.

The backup possesses strong career numbers against the mighty Penguins, who give franchise netminder Ryan Miller fits like no other team.

Besides, the Washington Capitals, a team Miller has dominated lately, are visiting the First Niagara Center tonight.

“I just know how good he is,” the interim Sabres coach said early Monday afternoon, “and you play him as often as you can.”

So Miller made his 24th career start against the Penguins, a 3-0 loss before a standing-room only crowd of 18,563 fans.

Miller played well enough to win, stopping 31 shots, including all 15 he faced during the first period.

“The first period, I mean, we just stood and watched,” Nolan said. “We didn’t compete. The one thing we want to try to do is at least compete. Skill is skill. When you don’t work, that’s not good.”

The Sabres got going during the second period, but Chris Kunitz and Deryk Engelland scored, giving the Penguins all they needed for their 15th home win in 16 tries. Tanner Glass added an empty-net score.

“The second period we decided to start working,” said Nolan, whose club has dropped six of its last seven. “The first one we were in awe of just watching them do their thing.”

Buffalo’s offense, which had 20 goals in six games entering Monday, pumped 24 shots on Penguins goalie Marc-Andre Fleury, including 19 in the final 40 minutes. They’ve been blanked seven times in 51 contests this season.

Still, with Miller, even a single score might’ve given them a chance. Miller said he wasn’t thinking about how poorly he had played against the Penguins in the past.

“It doesn’t cross my mind,” said Miller, who began the night with an awful .888 save percentage against the Penguins and is now 7-12-3 versus them. “Every game’s independent and every game’s new. They’ve had a good team here for a while.”

“It’s a chance for then to kind of scout me, I guess,” Miller said. “That’s kind of what they’ve been doing is try to see us in person, how we handle ourselves. You can’t always go by highlights, box score and tape. …

“For us, it was another game, and for me, it’s another chance just to keep building my game, regardless of who’s coaching. I know they’re paying attention most nights anyway. I don’t think it makes that big of a difference.”

Seconds after Miller stoned superstar Sidney Crosby in front, Kunitz opened the scoring at 5:44, capitalizing after Jamie McBain whiffed on a clearing pass.

“You think?” Nolan replied when asked if the defenseman had a rough night. “He had a rough one.”

Engelland scored in close at 12:05 after Henrik Tallinder turned the puck over along the wall.

The Sabres almost had two goals early in the third period.

Brian Flynn put the puck through the crease in close early. Then Matt Moulson fell down in front of Fleury all alone.

The power play went scoreless in three tries, meaning the Sabres haven’t scored on the man advantage in nine straight games in Pittsburgh (zero of 21). Jason Pominville had their last power-play score here way back on Feb. 1, 2010 at “The Igloo,” the Penguins’ old arena.