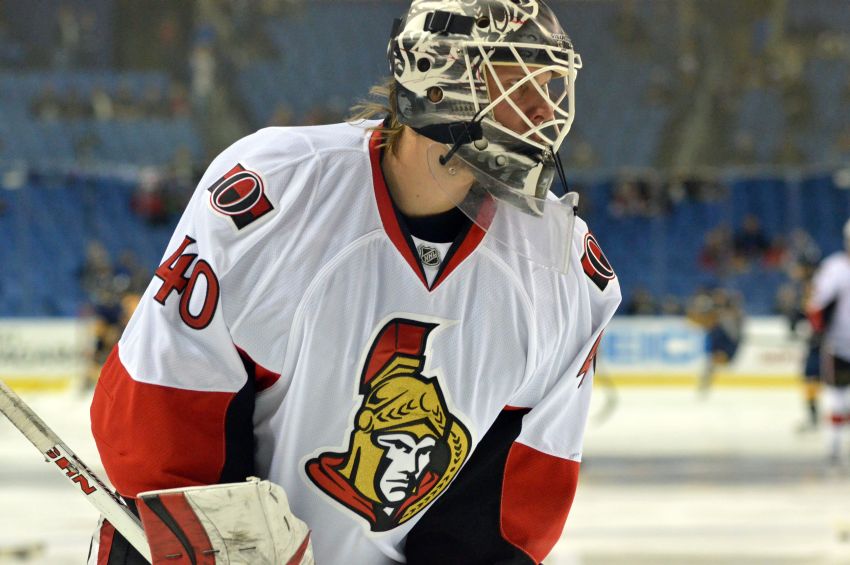 “He’s got a very nice smiling face,” Lehner joked about the notoriously serious Murray during a conference call Tuesday. “You guys can see that a whole lot. He’s a very serious guy to handle.”

A scary concussion – teammate Clarke MacArthur ran into Lehner in his crease – stalled his development last season. He missed the final three months and lost his job when an unknown AHL goalie, Andrew Hammond, went unbeaten in his first 15 starts.

As the Senators roared up the standings into a playoff spot, Lehner was suffering from “constant headaches.” Watching wasn’t easy.

“You want to be the guy who helps the team win, 100 percent,” he said. “I think me included and everyone else on the team, we didn’t have a good first half of the season. I think Hammond, he played amazing. I think if you look at the numbers, all the other guys, they stepped up in the second half of the season.”

“I’ve been very anxious, started getting my head together,” he said. “My headaches, (they’ve) been gone now for a while. I’ve been working out now for a few weeks. I sat around not doing pretty much anything at all for three, four months. That’s the first time in my career I’ve gone not moving for that long.

The Sabres are counting on Lehner, who has never played more than 36 NHL games, to handle a heavy workload perhaps upwards of 60 games. The only other goalie on their roster, Chad Johnson, is a career backup.

“I don’t think that will be an issue,” Lehner said about playing regularly. “I’m looking forward to the opportunity, but I got to deserve it, I got to perform, then we’ll go from there.”

The 6-foot-5, 225-pound Lehner doesn’t believe the concussion – “It was not a hockey play,” he said – will hamper his aggressive style. Type his name into Youtube.com, and fights, hits and outbursts pop up.

For a goalie, Lehner possesses a fearsome edge. Don’t get near his net.

“I think I’m competitive,” he said about his style. “I think over the last few years I’ve done a lot of positioning, adjusted a little bit. I think I don’t move as much. I just think I’m very competitive when I’m on the ice. … I feel like I’m pretty calm out there. I have a lot to prove and I like the challenge.”