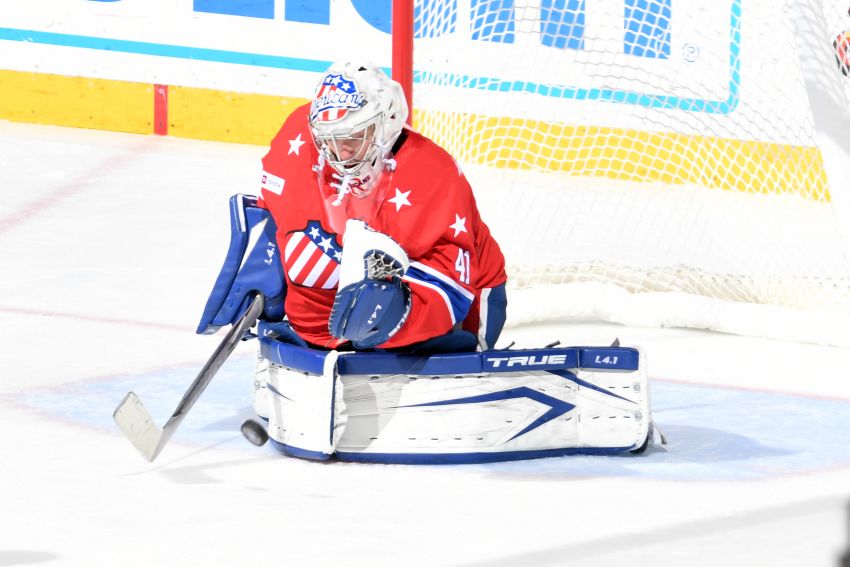 Goalie Michael Houser, who made his NHL debut late last season and started the Buffalo Sabres’ final four games, will be back in the organization next year.

The Rochester Americans on Thursday announced they’ve agreed to terms with Houser, 28, on a one-year AHL contract.

Houser, who has spent most of his career in the ECHL, became one of the hockey’s feel-good stories last spring, cracking the NHL for the first time in his ninth pro season.

After serving as a backup in Rochester early in the season, Houser signed a two-way contract on March 19 to become the Sabres’ taxi-squad goalie. He also occasionally dressed as the No. 2 netminder.

When goalies Ukko-Pekka Luukkonen and Linus Ullmark suffered season-ending injuries and Dustin Tokarski left the team for personal reasons, Houser was pressed into his action.

Houser played his first NHL game May 3, making 36 saves in the Sabres’ 4-2 home win over the New York Islanders. He beat the Islanders again the next night, stopping 45 shots in a 4-3 shootout win.

Overall, Houser compiled a 2-2-0 record with a 3.46 goals-against average and a .901 save percentage with the Sabres.

Houser has played 77 career AHL games, including four with the Amerks in May, registering a 33-28-6 record with a 2.84 goals-against average and a .903 save percentage.

But he has mostly toiled in the ECHL, becoming one of the league’s top netminders. In 210 career outings, he has compiled a terrific 127-57-22 mark, a 2.47 goals-against average and a .915 save percentage.

He was named the ECHL’s top goalie in 2018-19 with the Cincinnati Cyclones.

Houser could be ticketed for Cincinnati, the Sabres’ ECHL affiliate, again in the upcoming season. He spent two years there before the Cyclones opted out of last season.

Tokarski or newcomer Aaron Dell could start the year in Rochester with Luukkonnen.

Mersch, 28, compiled eight goals and 19 points in 28 games with the Amerks last season. He has scored 20 or more goals in the AHL four times.

The Wisconsin product played 17 games for the Los Angeles Kings in 2015-16.