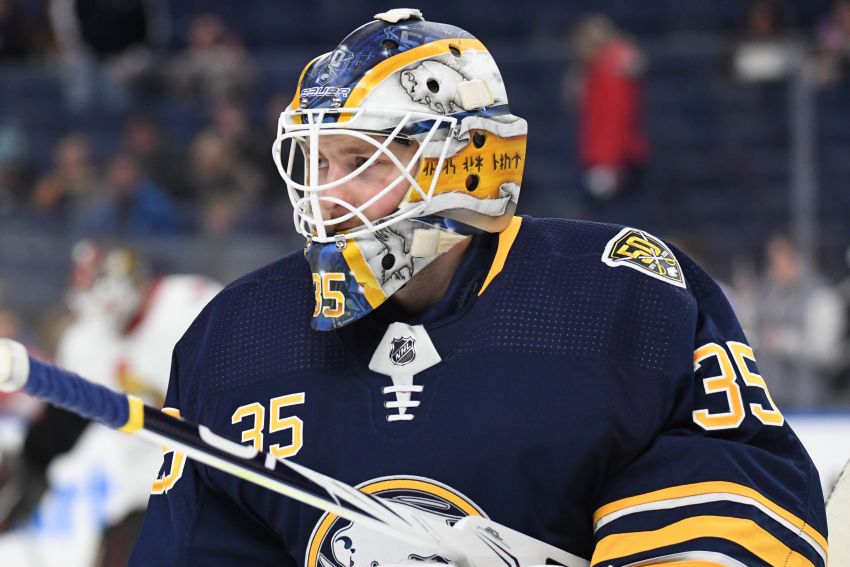 BUFFALO – Expect Linus Ullmark to morph into a workhorse again over the final four weeks this season. If the goalie can stay healthy, he might start 12 or 13 of the reeling Sabres’ 14 remaining games.

Ullmark, who hasn’t played since suffering a lower-body injury Jan. 28, will likely start tonight against the Washington Capitals at KeyBank Center.

The Swede, 26, developed into the Sabres’ backbone during his career-best run, compiling an 11-5-2 record with a 2.64 goals-against average and a .913 save percentage.

“I played well,” Ullmark said Friday. “The guys played well in front of me as well, made it easy for me to go to work every night.”

In his absence, it became clear Ullmark is the Sabres’ best option in net this season and next year.

Hutton, 34, enjoyed some terrific performances subbing for Ullmark, possibly saving his career by winning six out of eight starts over a three-week stretch.

But Hutton isn’t the long-term solution in net. The veteran endured a stunning in-season decline, losing 12 straight games after starting 6-0-0. He has struggled again in the last two weeks – not that he’s had much help – losing four times during the Sabres’ six-game skid.

In Saturday’s 3-1 loss in Philadelphia, Hutton cemented the Flyers’ win late by committing one of the worst goalie gaffes this season. After Sabres defenseman Rasmus Ristolainen dished the puck back to Hutton in his crease, he appeared not to see Joel Farabee zooming toward him, and he gave it to the Flyers forward for an easy goal.

Meanwhile, goalie prospect Jonas Johansson, who was recalled when Ullmark went down, looked impressive at times during his first six NHL games, going 1-3-1 with a 2.94 goals-against average and an .894 save percentage. But the Swede, an AHL All-Star with the Rochester Americans, clearly isn’t ready for the big leagues yet.

With Johansson in Buffalo, the Amerks recalled top Sabres goalie prospect Ukko-Pekka Luukkonen from the Cincinnati Cyclones, their ECHL affiliate.

Luukkonen, 20, has posted below-average numbers – 3-4-3, 3.15 and .874 – in 10 AHL outings. While it’s a small sample size and the Finn is a rookie, his play in the AHL illustrates he almost certainly won’t be ready for the NHL next year. Goalies often need two, three or even four years to develop in the minors.

With Johansson, 24, back with the Amerks, Luukkonen could be sent back to the Cincinnati again soon.

Ullmark, who has compiled a strong .914 in 33 total appearances, was on pace to play 54 times this season before getting injured. If he stays healthy next year, he could surpass that number.

The Sabres’ feeble offense, which has scored only 10 goals in the last six games, showed signs of breaking out Saturday.

Against the Flyers, the NHL’s hottest team, the Sabres pumped 39 shots on goal.

Sabres coach Ralph Krueger rearranged his lines before the game, most notably putting winger Jeff Skinner back with top center Jack Eichel and Sam Reinhart for the first time this season. Meanwhile, rookie Victor Olofsson moved beside center Marcus Johansson and newcomer Dominik Kahun, who scored the Sabres’ only goal.

“It felt really good, I really liked the team tonight,” Krueger said of the new lines to reporters Saturday in Philadelphia. “I thought we had two real nice pushing more pushing more offensive lines with Johansson and Eichel. I thought they created some nice opportunities, they had a different look to them.

“I thought (Johansson’s) line was more of a free-flowing (line), kind of moving pucks, supporting each other. Jack’s line was pretty linear and also had some good o-zone time, especially in the first period. Both the (Curtis) Lazar and (Johan) Larsson lines created a lot of those offensive zone grind time, which is what you like to see.”

Every trio generated a Corsi For – the percentage of shot attempts by the team while the line is on the ice five-on-five – of at least 57.1% on Saturday, according to NaturalStatTrick.com.

Johansson’s line had the highest Corsi For at a whopping 72.2%.

Notes: The Sabres had Sunday off. … The Sabres sent defenseman John Gilmour back to the Amerks on Sunday. They summoned Gilmour on Saturday because defenseman Lawrence Pilut (illness) couldn’t play. Gilmour was scratched. … Sabres winger Michael Frolik played Saturday after sitting out four straight games as a healthy scratch. To make room, the Sabres scratched winger Jimmy Vesey.