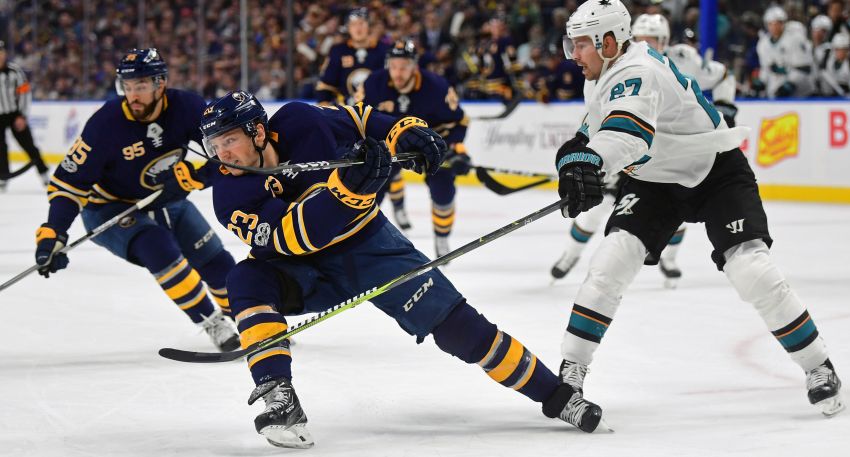 No one, except for perhaps a couple eagle-eyed San Jose coaches, realized a problem with the power-play goal, which seemingly tied the game at 1 just over 17 minutes into the game.

Seconds before Eichel scored from the left circle, Sabres center Sam Reinhart briefly ran into Dell in his crease, knocking him down. So the Sharks challenged the goal, and after a lengthy review, officials ruled Reinhart interfered with Dell.

Was the goalie interference call correct? It depends on whom you ask.

“If the goalie can recover on the next (sequence of the) play … it should be a goal,” Reinhart said of the rule following the Sabres’ 3-2 loss inside KeyBank Center. “In my eyes and our eyes, he got himself back in and it went through him, so it’s a little tough to swallow.”

Coach Phil Housley said if the Sabres experienced the same type contact with their goalie, they’d want the goal called back.

“It’s unfortunate, I thought (Dell) had time to reset,” he said. “But since the initial contact came within the paint, they definitely had an argument.”

Reinhart said he approached the crease trying to tip the puck.

“My right foot seemed way over the crease,” he said. “My impression was that I swung my leg around and got out of the way.”

“The goalie slides and it looks like he got set again,” he said. “It’s a tough call for the refs. It’s a fast game. Maybe it affected him a little bit.”

Still, Eichel said “it’s definitely a tough one to swallow.”

“Those ones get you going, first period power-play goals,” he said. “Our power play’s been struggling. It’s not like I’ve been finding the back of the net a ton.”

After failing to convert on that power play, the Sabres ended a 1-of-13 stretch on the man advantage when center Ryan O’Reilly scored from above the left circle 2:55 into the second period.

Housley kept mixing up his units recently, adding new players and switching others. But before Eichel’s disallowed goal, the rookie coach put the five players who contributed to the NHL’s No. 1 power play last season – Eichel, O’Reilly, Reinhart, winger Kyle Okposo and defenseman Rasmus Ristolainen – back together.

“It was just a decision, spur of the moment, that I thought it was time to get those guys back together. We needed a momentum boost.”

“Earlier in the year our group was below average,” he said. “I thought tonight we had some really good power plays, got some good looks. I know I’d like to have a few back … but I thought we moved it well. I thought we just ‘outcompeted’ the penalty kill, which is what we need to do.”

Notes: The Sabres had two healthy scratches, defenseman Taylor Fedun and winger Matt Moulson. They sent Fedun back to the Rochester Americans following the game. Fedun has one assist in two NHL games this season. The Sabres don’t play again until Thursday in Arizona. … Housley said defenseman Justin Falk (lower body) is still day-to-day. … O’Reilly has four goals and seven points in his last six games after mustering just one assist in his first five outings.