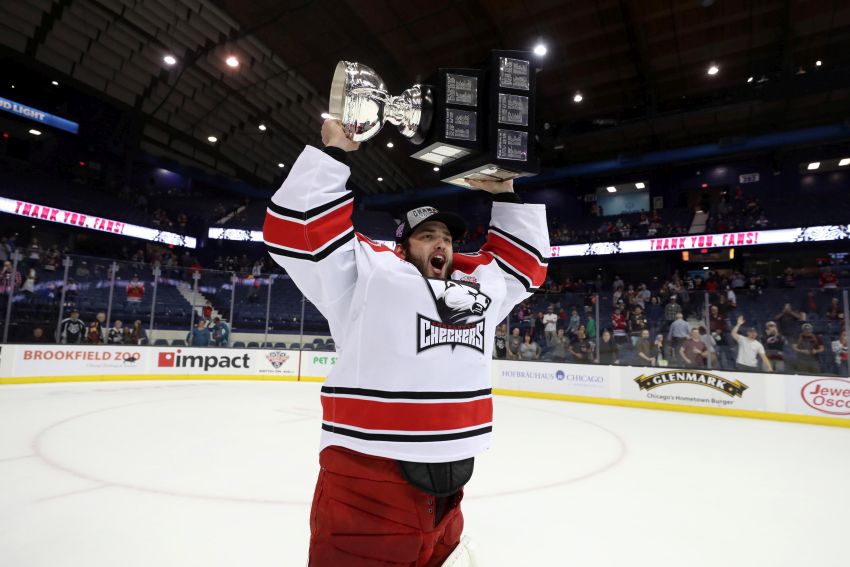 Dustin Tokarski was ecstatic after winning the Calder Cup with Charlotte in 2019. ©2020, Gregg Forwerck, AHL

In his 11-year career, Dustin Tokarski has played 361 games in the American Hockey League, more than any active goalie. The Buffalo Sabres newcomer has won Calder Cup championships as a starter and a backup and as a prospect and a graybeard.

When Tokarski tends goal for the Rochester Americans, he will have played for 10 AHL teams. Three of them are no longer in the league.

Tokarski, 31, has experienced virtually everything in the minors, where he has made 91% of his appearances as a pro. Last season, despite going undefeated during the Charlotte Checkers’ championship run in 2019, he signed an AHL contract for the first time.

So naturally, the two-year, two-way contract Tokarski signed Wednesday felt satisfying. In addition to earning an NHL contract, the Sabres awarded him a multi-year deal.

The uncertainty the COVID-19 pandemic has created forced teams to scale back in free agency. The other three AHL veterans the Sabres signed – forward Steven Fogarty and defensemen Brandon Davidson and Casey Nelson – all received one-year contracts.

“To lock up some security and just know that someone else is putting that faith in me to be a part of this for hopefully those two years, definitely I’m very excited,” Tokarski told the Times Herald on Friday. “I got that fire in me to push toward great things.”

In a normal season, Tokarski would likely split time in Rochester with a goalie prospect – Jonas Johansson or Ukko-Pekka Luukkonen – and help mentor him.

But the pandemic, of course, has wreaked havoc on sports leagues. Right now, the AHL has targeted Feb. 5 – four months later than usual – as its anticipated start date. The NHL, meanwhile, wants to begin its schedule Jan. 1.

Minor league teams rely on gate revenue to operate, meaning the AHL season could be in jeopardy if fans can’t attend games. If the season is canceled, the NHL might expand rosters or implement practice squads.

If the Sabres extend the European loan agreements they began for Johansson and Luukkonen earlier this season, Tokarski could serve as the organization’s No. 3 goalie behind Linus Ullmark and Carter Hutton.

“In the sports world, especially in goaltending, things can change pretty fast, never mind in a pandemic, which we don’t know exactly when things are starting,” Tokarski said. “We don’t know how long they’re going to go for. We don’t exactly know roster requirements or commitments and how that’s going to go. I think a guy just has to prepare for anything.”

Tokarski hasn’t tasted NHL action since a 10-minute relief stint for the Anaheim Ducks in 2016-17. Still, he has played meaningful games in the big leagues.

When Montreal Canadiens goalie Carey Price was injured in the 2014 playoffs, Tokarski started five games, winning two and posting a .916 save percentage. He parlayed that brief gig into a job as Price’s backup the next season.

“It was awesome,” Tokarski said of his experience with Montreal. “It was a dream come true, to be thrown in the fire, to have faith in me playing in the playoffs there when Carey Price unfortunately got hurt. (I) gained a ton of experience, it was a heck of a ride.

“And then to be able to play the next year in the NHL, back up Carey Price. I got to witness him have his Vezina (Trophy) season. That was special to watch. I learned from Carey, one of the best in the world. Definitely helped mold me into who I am today.”

“He gets scored on in practice, he’s just as mad as I’ve seen a guy get mad,” said Tokarski, who was traded to Anaheim in 2015-16. “That’s why he’s elite, and that’s why he can carry a team, because he doesn’t stop getting better.”

Tokarski has kept getting better over the past two seasons. After arriving in Charlotte on loan from the Hartford Wolf Pack in 2018-19, he went a combined 12-0, winning five playoff games. In 18 games with the Wilkes-Barre/Scranton Penguins last season, he compiled a 9-5-2 record with 1.97 goals-against average and a .924 save percentage.

“I don’t think my overall game has changed too much,” he said. “Some people just find the maturity of their game at different times. As a goaltender, maybe around (age) 28, 29, things came together a bit more.

“I mean, I’ve played a year in the NHL and had some tastes in other organizations. I’ve made a mark there. But obviously I wasn’t able to be quite consistent enough to be fully established. I hope to continue my good little run of play I’ve had the last couple years, and I feel like that’s my game now, and I’m happy that Buffalo saw that as well.”