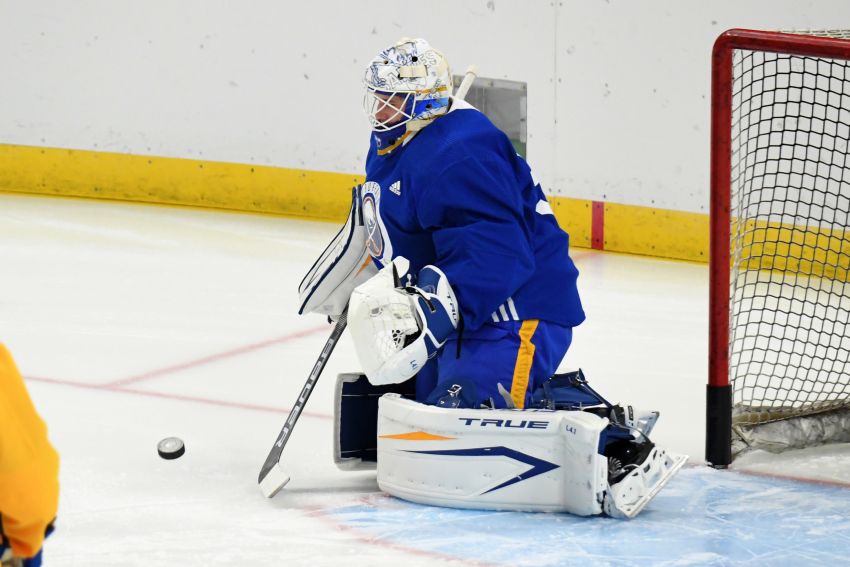 After playing his first NHL game in more than four years, Buffalo Sabres goalie Dustin Tokarski allowed himself a moment to reflect on his journey back to the big leagues.

Tokarski, who played five playoff games for the Montreal Canadiens in 2014, hadn’t experienced any NHL action since Oct. 26, 2016.

Over the past few seasons, Tokarski, 31, quietly rebuilt his career, morphing into one of the AHL’s premier netminders.

So Tokarski’s strong 33-save effort after replacing the injured Carter Hutton early in Monday’s 5-3 loss to the New York Rangers felt extra special.

“I got to say it was a lot of fun,” Tokarski said following the Sabres’ 14th consecutive loss, which ties a franchise record. “It’s been a little while, I’ve had some ups and downs the in the last four, five years. But it’s a been a good few years. I’m excited to be a part of Buffalo and get the opportunity to play in a game.”

Tokarski could earn more opportunities soon. Hutton left the game at the 2:53 mark after Sabres defenseman Rasmus Ristolainen knocked the Rangers’ Julien Gauthier into him. Hutton got up slowly and couldn’t put any pressure on his left foot as he was helped off the Madison Square Garden ice.

“I didn’t have to think too hard, I just had to throw the stuff on and go play some goal,” Tokarski said on a Zoom call.

Interim Sabres coach Don Granato did not have an update on Hutton following the game.

The Sabres are already missing No. 1 goalie Linus Ullmark, who has spent the last month recovering from a lower-body injury. Ullmark is expected to begin practicing soon. They traded goalie Jonas Johansson to the Colorado Avalanche on Saturday.

Besides Tokarski, only healthy goalies in the Sabres organization are Michael Houser, who was just promoted to the taxi squad, and top prospect Ukko-Pekka Luukkonen, who’s in Rochester.

With Johansson gone, the Sabres elevated Tokarski, who has played two games for the Rochester Americans this season, from the taxi squad.

“I thought he battled and competed hard,” Granato said. “Certainly wasn’t easy. You jump up and your timing’s off and you’ve got some great shooters on the other team. But from a competitive aspect and aspect of staying focused, determined, I thought it was a great effort by him.”

But the Sabres roared back to tie it at 3 early just 4:22 into the third period. Rookie center Dylan Cozens scored at 1:09 before winger Jeff Skinner, who’s finally starting to resemble his old self, tied it.

“That was great,” Granato said of the comeback. “They worked for it, they believed they could do it, and they were excited about the task. It was at the start of the period so they came out and didn’t hang their head and, obviously, the fact as a fact is very encouraging and even until the end they believed. They kept a pace that showed you they believed.”

Chris Kreider’s power-play goal at 5:47 put the Rangers up for good.