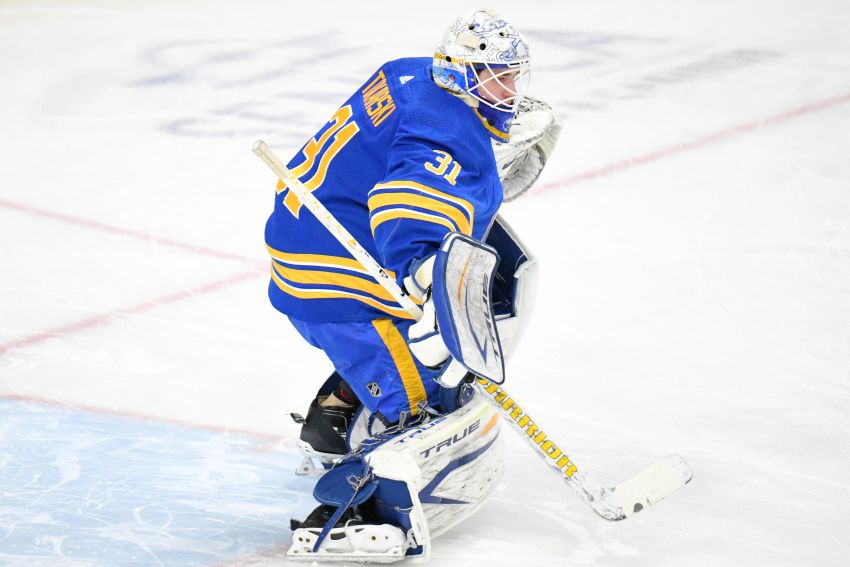 BUFFALO – Having played goalie into his mid-teens before switching to forward, interim Sabres coach Don Granato possesses a strong understanding of the unique position.

Granato knows the strain of playing back-to-back days often affects the goalie’s focus and other subtleties in his game. He might, for example, have trouble playing his angles or handling rebounds.

But in Sunday afternoon’s 4-2 win over the Pittsburgh Penguins, goalie Dustin Tokarski looked sharper than he did a day earlier, stopping 34 shots and taking a shutout into the third period inside KeyBank Center.

“That’s competitiveness and that’s drive and determination,” Granato said of Tokarski on a Zoom call. “So all those intangibles are what push him through and pushes anybody through. … He looked even better tonight because of those intangibles.”

Granato has kept utilizing Tokarski, 31, because goalies Linus Ullmark and Carter Hutton are injured. Goalie Michael Houser, who has never played an NHL game, was the only other option Sunday.

The Sabres recalled top prospect Ukko-Pekka Luukkonen to the taxi squad Saturday, but they want him to practice before he plays a game.

Of course, Tokarski, who hadn’t appeared in an NHL game since 2016 before last month, would’ve played no matter how he felt.

“If someone’s giving me an NHL start, I’m taking it every time,” said Tokarski, who earned his first win Thursday since Dec. 12, 2015.

Battling, of course, is a big component of the 5-foot-11 Tokarski’s game. It helps him make up for his lack of size and stand out on days like Sunday.

The Sabres played one of their most complete games this season, grabbing the lead 26 seconds in when rookie winger Arttu Ruotsalainen converted center Dylan Cozens’ two-on-one pass. They never trailed in beating the Penguins for the first time in six tries this season.

How much have the Sabres improved under Granato? They won six times in 28 tries (6-18-4) under former coach Ralph Krueger, who was fired March 17 in the midst of an 18-game winless streak.

These days, the Sabres also play a faster brand of hockey. Despite playing their second game in two days, they kept up their pace Sunday.

“I was really happy with that,” Granato said. “I mentioned in the locker room after the second that we come in and we look at a couple clips and some of the clips that we looked at, it looked like we were pressuring and we had kind of worn on them a little bit. They looked a little more tired than we did just in a quick review. …

“It made me think back to last night’s game, just making that game hard all the way to the end might have had an affect tonight because we did have some good energy but I thought we played a little wiser game. We didn’t tire ourselves.”