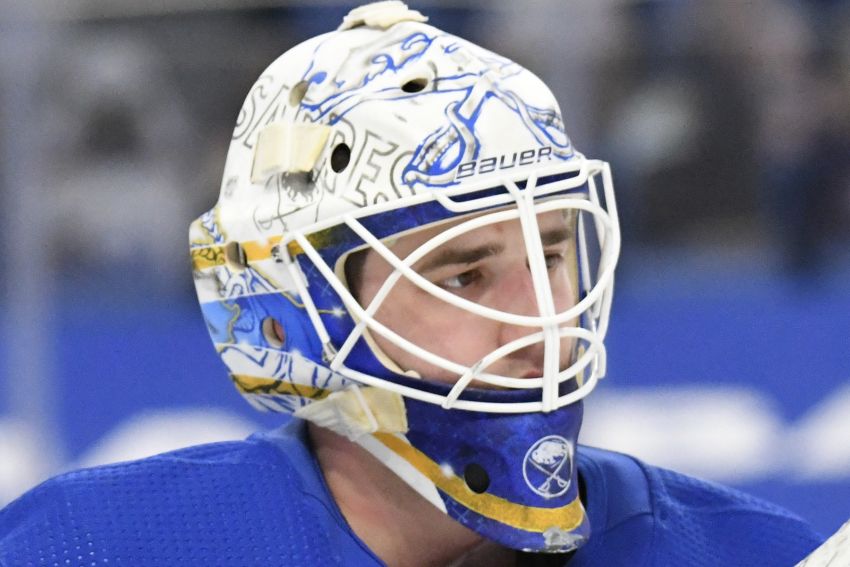 As coach Don Granato watches Dustin Tokarski move around his crease aggressively challenging shooters, he sees a goalie comfortable in the Sabres’ system.

Tokarski, 32, has quickly established himself as a trusted option for Granato, stopping 57 of the 60 shots he has faced through two starts.

“He’s reading where and when and how shots are coming,” Granato said on a Zoom call following Saturday’s 2-1 overtime loss to the New Jersey Devils. “… When you see a guy playing aggressively in net, confidently, you know he has that feel of it’s a six-man unit out there.”

Having lost to the Boston Bruins 4-1 on Friday in Buffalo, the Sabres looked gassed as they finished their first back-to-back set this season.

“Our goalie was the freshest guy in the game and he looked like it, right?” Granato said. “And that’s a big part of it. He’s a competitor. But clearly, he had fresh energy and did what he should’ve done, and I think he’d tell you the same thing if you probably had him in here. He did a hell of a job for us.”

Tokarski held the Sabres in their first road game this season, stopping 28 shots over the final 40 minutes of regulation. The Devils did not score until Nico Hischier’s power-play goal tied the contest 5:52 into the third period.

“He was awesome. Unbelievable,” Sabres defenseman Will Butcher said of Tokarski’s performance. “He gave us a chance, we had breakdowns and he bailed us out every time.”

Fresh off a strong 13-game run last season, his first NHL appearances since 2016, Tokarski has looked sharp from the get-go. He won the backup job early in training camp, outplaying Aaron Dell. In his season debut Oct. 16, Tokarski made 20 saves in a 2-1 shootout win over the Arizona Coyotes.

Considering the Sabres’ loaded schedule because of the NHL’s Olympic participation – they have 16 more back-to-backs, for example – Tokarski will likely keep earning more starts behind No. 1 goalie Craig Anderson.

Clearly, Tokarski’s teammates like playing in front of him.

“First thing about Ticker is he’s a great teammate,” Butcher said. “I think that goes hand in hand because guys want him to do well, they trust him, they believe in him. He’s a great person, a great teammate, and I’ve only known him a short time. He played a hell of a game tonight.”

Sabres center Dylan Cozens scored his first goal this season, a power-play tally 3:19 into the game.