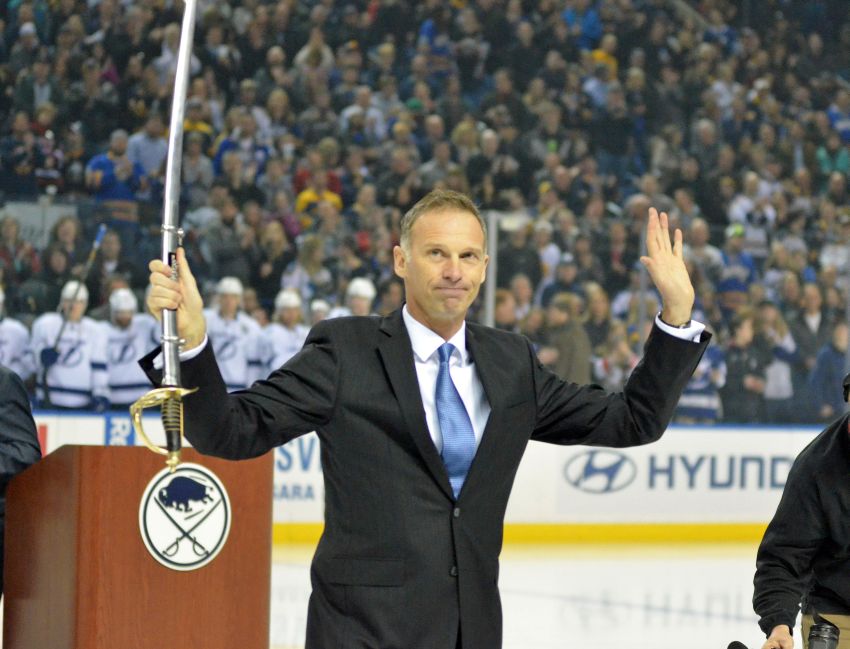 BUFFALO – It was the dawn of the 1992-93 season, and the Sabres had just acquired Dominik Hasek, a raw, relatively unknown goalie from the Chicago Blackhawks.

“He said, ‘This guy’s a little unique, so just leave him alone, and if he wants your help, he’ll just come to you, just work with the other guy,’” Korn said by phone Sunday from Toronto, where he’s visiting for Hasek’s Hockey Hall of Fame induction tonight. “And that’s really how it started. I didn’t spend a great deal of time with him.”

Shortly after Muckler’s order, the Sabres played a preseason game in Hamilton, Ont. Korn left his Ohio home early in the day and drove nine hours to Copps Coliseum.

When Korn arrived, Muckler didn’t say hello or ask about his trip.

“That was kind of when I got carte blanche to get after it.”

Twenty-two years later, Hasek and Korn still share a mutual respect. Hasek thanked Korn on Friday, telling reporters, “I was lucky to have a coach who never really tried to change my style.”

“It was very special for me,” he said. “It was a long time ago. There was a lot of guys in between then and now. It was just very nice.”

To Korn, Hasek, a six-time Vezina Trophy winner and two-time NHL MVP, is the greatest goalie ever.

“Absolutely,” he said. “We will argue until the cows come home that the “Big Three,” if you will – (Patrick) Roy, (Martin) Brodeur and Hasek – in the modern era will go down as the three greatest. But for me, nobody made more of a difference every night, because he didn’t play with maybe as good a team as either of those other (two), and he did it every night, not just every six games, not just occasionally.

“This guy did it every night for a good long period of time. He was that dominant on a team that really needed him to be dominant.”

But before Hasek became one of the NHL’s all-time greats, he was “really all over the place,” Korn said.

As a 27-year-old entering his first full NHL season, Hasek’s on-ice instincts hadn’t caught up to his intelligence. He had to learn to be patient and manage his information.

“He was so smart he knew exactly what was going to happen next, but he was too early,” Korn said. “So he showed his hand like a bad poker player, and that gave players a chance to adjust to Dom, and so he just didn’t have enough patience to make greatness of his ability to process what was going on.”

“I believe Dominik Hasek’s one of the few guys that had all thousand pieces,” he said. “I can tell you when I met Dom, almost all of the thousand pieces were spread out all over the table, and they weren’t put together yet.”

So they worked on an array of goaltending skills – skating, handling the puck and even catching it.

Later in 1992-93, the Sabres acquired goalie Grant Fuhr, another future Hall of Famer, and Hasek hurt some stomach muscles.

One time the two were sitting in a small video room inside Memorial Auditorium. Since Hasek’s English wasn’t too strong then, Korn couldn’t use clichés or any local vernacular. So Korn acted out what he wanted Hasek to do.

“I actually lied down on the floor,” he said.

Assistant coaches Don Lever and John Tortorella walked in with Korn on the floor.

“They just shook their heads,” he said.

Still, Hasek wasn’t an overnight success. Fuhr was the Sabres’ guy. They even left Hasek unprotected during the 1993 expansion draft.

“If he had been taken by an expansion team, the question you could ask is, ‘Would any of this have actually happened?’” Korn said.

During 1993-94, Korn said, everything Hasek had learned “really kicked in.”

Fuhr was injured early on, giving Hasek the No. 1 job. He posted consecutive shutouts shortly after taking over. He kept the job until the Sabres traded him in 2001.

Hasek finished 1993-94 with a stunning 1.95 goals-against average, an unheard of number then, and won his first Vezina Trophy.

“That,” Korn said about the shutouts, “was the catalyst for all that.”