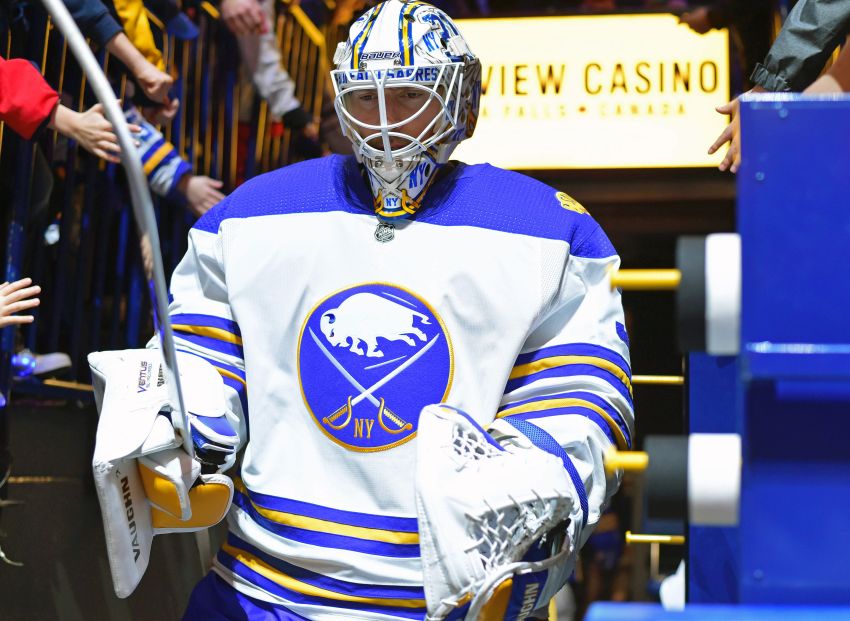 Despite a hot stretch during the winter, Chad Johnson ended this season with some weak statistics. ©2018, Hickling Images

BUFFALO – If Chad Johnson had known the Sabres would struggle so much this season, the goalie likely would’ve looked for work elsewhere.

“I wouldn’t have put my career in a situation like that after having a lot of success and doing well,” Johnson said Monday as the Sabres cleaned out their lockers and held exit interviews inside KeyBank Center.

Thanks to two strong seasons, Johnson, 31, enjoyed some options during free agency last summer. A sense of unfinished business, among other things, lured the veteran back to Buffalo on a one-year, $2.5 million contract.

Two years ago, Johnson was quietly the Sabres’ unsung hero, winning 22 games for a team that looked poised to morph into a contender.

But right away, Johnson said his second stint felt “a lot different.”

“Two weeks in, it was a different feeling from the first time I was here to probably last year (with Calgary), too,” he said. “It just really wasn’t what I expected to be, it wasn’t what anybody expected it to be.”

Johnson said he takes “full responsibility” for choosing the Sabres.

“On paper, it was there,” he said. “Everything was there, the skill’s there, we have the pieces. It just didn’t come together.”

In the end, Johnson registered poor numbers in 36 games backstopping the NHL’s worst team, going 10-17-3 with a bloated 3.55 goals-against average and a weak .891 save percentage.

“There was a lot of tough games this year,” he said. “That part … (ticks) me off and leaves me bitter and frustrated.”

Johnson, who was adamant all season he felt good, won his first game Oct. 15 and his second Jan. 22.

The last Sabres goalie to play more than 30 games and post a goals-against average of more than 3.50 and a save percentage of less than .900 was Grant Fuhr in 1993-94.

Still, when the Sabres found a bit of a groove under new coach Phil Housley during the winter, Johnson enjoyed a hot stretch, becoming one of the NHL’s best goalies.

“When we did get good goaltending, we didn’t get enough goal support,” Housley said. “Obviously, we probably needed a save here or there at critical times of the game. … But I don’t think you can put blame on the goaltenders overall.”

In the final two weeks, as the Sabres fell apart again, Johnson closed the miserable season with terrible statistics – 1-4-0, 4.92 and .858 – in five games.

“You just have to hope that games were watched, not looked at the statistics side of it,” Johnson said. “You hope people come to the games and they watch video and they see sort of what happened and why it happened. Obviously, I didn’t step up when I needed to and make more saves, and that’s on me. I just wasn’t able to do that.

“But for a lot of games … it just seemed like a mess. Things need to change for a goalie to have success.”

The Sabres could be interested in re-signing Johnson. They’ll need a veteran backup next season, most likely for Linus Ullmark, who’s expected to replace Robin Lehner as the starting goalie.

But does Johnson want to return? He said he would under the right circumstances.

“I showed that this year when things are the way they should be, that I can have an effect on this team, a positive effect, and beat good teams,” he said. “But when it’s not, I can’t do anything in my own power to individually do what I have to do to have success. …

“I’d have to see the change, whether it’s through players or somehow convince me through contracts, through whatever it is, to come back, then I would. Because I do believe that the organization wants to win.”

For Johnson, who has already played for six teams, free agency is the great unknown.

“That’s the frustrating part, the bitter part about it, it’s not just a guy in my situation or other guys on one-year deals, it’s a lot harder,” he said. “You can’t just flip the page and be like, ‘Oh, let’s just move on.’ It obviously hurts a lot more. …

“It was a big year, it was an important year and it just didn’t go my way. But you move on and you’re motivated.”