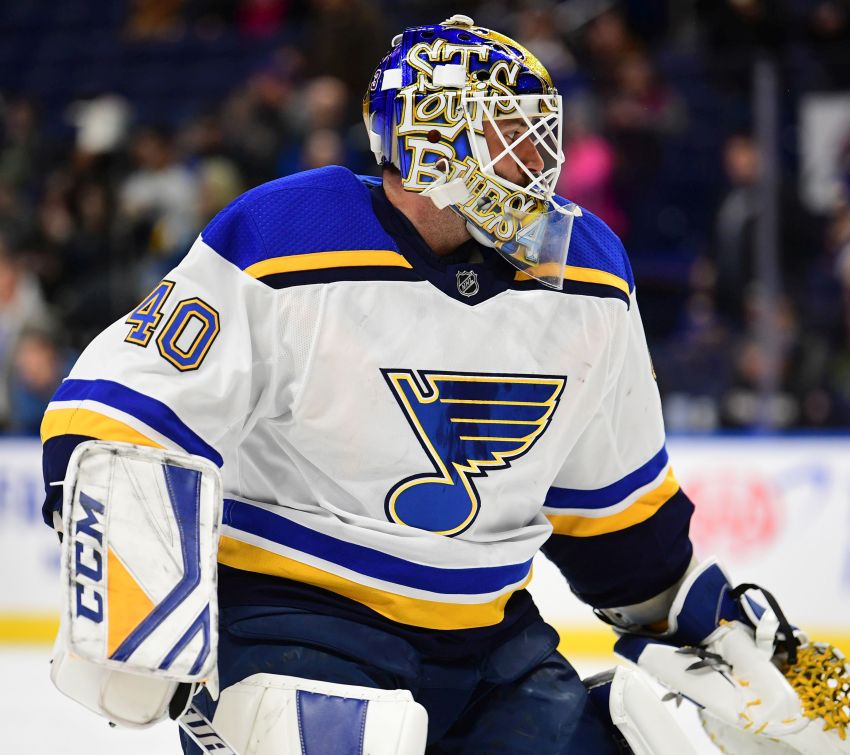 Carter Hutton could see a lot of action next season. ©2018, Hickling Images

BUFFALO – A simple factor contributed to Carter Hutton quietly morphing into one of the NHL’s best goalies last season. Instead of relegating the veteran to backup duty again, the St. Louis Blues rewarded his splendid play, giving him extra action.

In his first five full NHL seasons, Hutton had always been labeled the No. 2 goalie. After averaging only 21 appearances over the previous three years, he played 32 games in 2017-18, stealing playing time from Jake Allen and finding a rhythm.

Hutton, 32, seized his opportunities, going 17-7-3 with a 2.09 goals-against average and a .930 save percentage in 32 games, the highest number among goalies with 30 or more appearances.

“I got to play last year, that’s probably the easiest way to put it,” Hutton said Sunday on a conference call after signing a three-year, $8.25 million contract with the Sabres shortly after free agency opened. “When I played well, they kept kind of going with me. It was one of those situations where a lot of times it was out of my control. No matter how well I played, I was kind of restricted into that role, where contract-wise they were committed to someone else.”

Now, the Sabres are committed to Hutton, who will likely handle the bulk of the goaltending duties as prospect Linus Ullmark acclimates to the NHL.

Goaltending was the Sabres’ biggest need as free agency opened.

“He was a guy our scouts focused in on, our analytics department certainly focused on him a lot,” Sabres general manager Jason Botterill said on a conference call.

“I always thought it might be an option,” Hutton said. “At the end of the day, I was a guy who wanted to sign. It was a weird free agency period, not a ton of goalies in that sense.”

Being wanted, of course, is a special feeling.

“With Buffalo, I was obviously their guy, so it gave me a lot of confidence going in there knowing that I could go somewhere they wanted me to succeed,” Hutton said. “I’m really excited to join a team like this. They’re ready to win and I’m excited to win.”

Hutton believes the Sabres are missing just a few pieces. He mentioned flipping some of their 22 one-goal losses last season. Having defenseman Rasmus Dahlin, the first overall pick June 22, and center Jack Eichel, an NHL All-Star last season, in their arsenal shows “they’re kind of becoming a full team.”

“Jack Eichel is becoming a superstar in the league, if not already,” he said.

Goaltending was one of the Sabres’ many weak spots last season as they finished dead last. They parted with former starter Robin Lehner last week. Meanwhile, his backup, Chad Johnson, signed a one-year, $1.75 million contract with the Blues, replacing Hutton.

Ullmark, 24, might be the Sabres’ goalie of the future. The Swede earned spent three seasons with the Rochester Americans, developing into one of the AHL’s best goalies.

But the Sabres want to protect Ullmark, who has played 26 NHL games, and ease him into the big leagues.

Botterill said: “What we’ve learned about Carter is he has the confidence in the No. 1 role and also has a history of working with young goalies. We think it’s a great fit.”

“They understand my experience,” Hutton said of the Sabres. “I’ve been more in a mentorship role. I’ve backed up a lot of great goalies. There’s been times I’ve stepped in and played a lot of minutes, a guy gets hurt or I’ve played well.”

Hutton played well for the Rockford IceHogs, the Chicago Blackhawks’ AHL affiliate, for two seasons, paving his path to the NHL in 2013.

His goalie coach in those days was Andrew Allen, who now has the same position with the Sabres.

“I was pretty raw,” Hutton said. “I’ve always been like a pretty athletic goalie, I’ve always had that side of me, that capability. But finding more consistency, he helped me really evolve into just thinking the game, understanding what brought me success.”

Hutton has more familiarity with the Sabres. Coach Phil Housley was an assistant with the Nashville Predators when he played a career-high 40 games as a rookie in 2013-14. Head of collegiate scouting Jerry Forton was an assistant at UMass Lowell during his NCAA career.

“Phil’s a guy who, even in Nashville, he was a leader,” he said. “You look at his hockey career, he’s a successful guy at everything he does.”