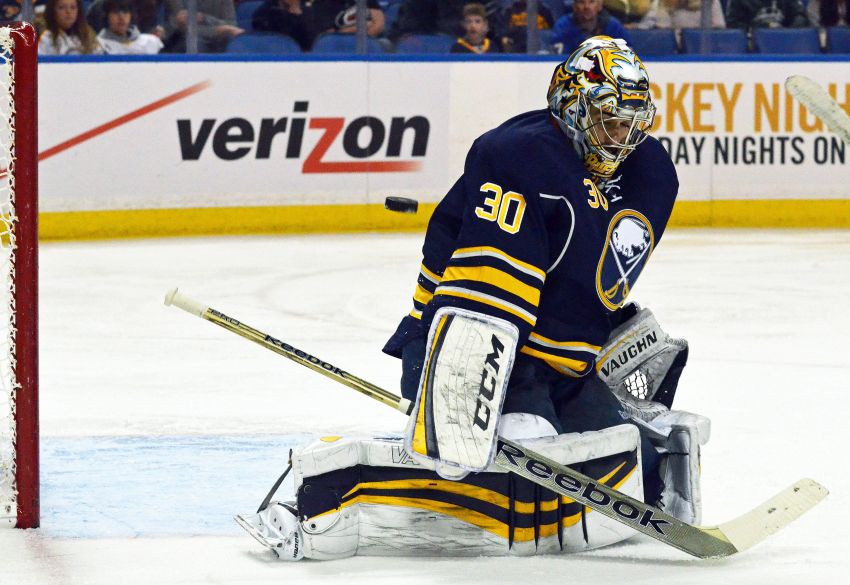 “Our priority right now on both sides is to pursue a proper trade,” Murray said Tuesday in a brutally honest interview prior to Miller’s 36-save performance in the Sabres’ 3-2 win against the Carolina Hurricanes.

The trade deadline hits one week from today. Murray sounds ready to deal and improve the NHL’s worst team.

The rebuilding Sabres want to put Miller, a 33-year-old former Vezina Trophy winner, “in a position to succeed,” Murray said. He called Miller, one of nine upcoming unrestricted free agents on the roster, a “good soldier.”

“Players that treat you right, play well and hard for you over the years, you try to do what’s best for them, too, as long as it fits into what you’re doing,” Murray said. “By trading Ryan to a contender … I think that certainly we’ve certainly not done a disservice to him and would help the organization in our own right.”

Miller, just back from representing Team USA at the Sochi Games, said he’s “discussed the timeframe” with the team. He wants to be realistic. Only of handful of players perform effectively into their 30s. Naturally, he wants to be one of them.

“But there’s no guarantees,” Miller said. “I’m not going to close anything off because maybe as we go through some things change. The things that they’re going to have to do they’re probably going to come during the trade deadline, and maybe I’m one of them. …

“It’s going to be tough to correlate seeing what they’re going to do, what they can do and what I might need to do with my career. I don’t want to close anything off right now, but I know they’re kind of looking around for opportunities. That’s probably the best for everybody.”

Murray said he’s listening to offers for Miller but not shopping him. Less than 10 teams but more than two are interested, he said.

“I think there’s enough really good teams that consider themselves contenders that are kicking around the idea of trading for a good goalie,” Murray said. “I think there’s a possibility with more talks something could happen.”

Miller will simply prepare to play hockey this next week.

“If it’s here, it’s been my home for 12 years,” he said. “I love this area. The fans have always been great. I feel at home in this community, a lot of friends. So enjoy that. If it happens that I’m traded, I’m preparing to play somewhere else.”

Miller, of course, isn’t the lone high-profile veteran available. Steve Ott, a gritty and versatile captain, will also be unrestricted and has generated a lot of interest, Murray said. He noted he’s spent his entire 21-year career looking for players of Ott’s ilk.

But Murray said the 31-year-old Ott has every right to pursue other opportunities.

Murray characterized the trade market as “very quiet, quieter than I guess I was really expecting.” He said he’s spoken to seven or eight GMs about 10 to 12 players.

“We think we’ve got lots of value here,” he said. “Now, if we can get value for them is the other question.”

What does he want back?

“Ideally, if teams would give me two good, young players that are two years or so into their development, that would be outstanding,” he said.

Could the Sabres scratch some of their available players so they don’t get injured?

“When I do, you guys will probably be the first one to know when they’re not playing,” interim Sabres coach Ted Nolan said.

Miller would want to keep playing.

Meanwhile, Murray said the Sabres are discussing a contract extension for Nolan.

Nolan was noticeably down despite the victory, the Sabres’ first in five tries. Perhaps the reality of losing Miller has hit him.

Once again, Miller was the Sabres’ difference-maker. They only sprinkled 18 shots on Carolina goalie Cam Ward before 18,719 fans inside the First Niagara Center.

“I don’t think we had too much reason to say we were the better team tonight outside of Ryan Miller stealing that game for us,” Nolan said.

Miller felt the nine-hour time difference from Russia, though.

Miller assisted on both Ehrhoff goals, the first-two assist game by a Sabres goalie since Daren Puppa on Jan. 14, 1991.

When was the last time Miller had two helpers?

“I played forward for a little while as a kid,” he joked.