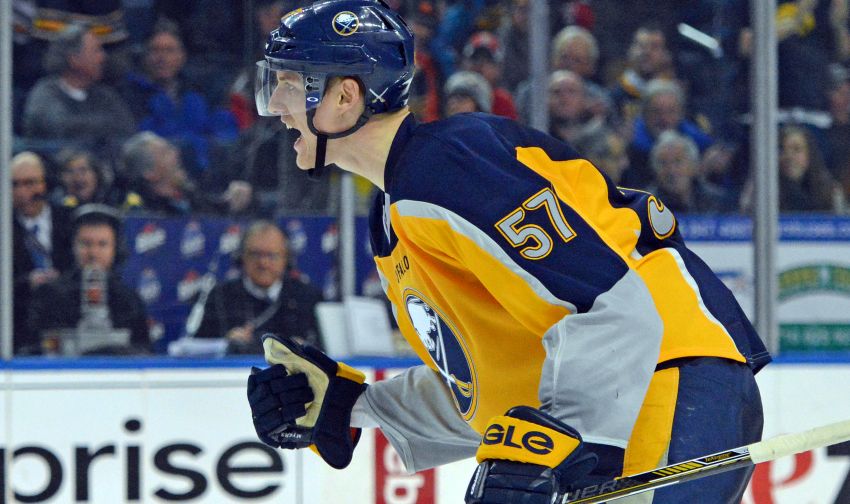 “My plan was to do something like this to speed it up,” Murray said this afternoon inside the First Niagara Center after pulling off the NHL’s biggest deal this season.

The Sabres paid a steep price, however, dealing a stud defenseman, winger Drew Stafford, prospects Joel Armia and Brendan Lemieux and a 2015 first-round pick for the established NHL talent and a goalie prospect.

Update: The Sabres have made another deal, trading goalie Jhonas Enroth to the Dallas Stars for goalie Anders Lindback and conditional third-round pick in 2016. The pick becomes a second-rounder if Enroth wins four playoff games.

“It was the only team looking for a goalie right now,” Murray said. “But if they’re a serious playoff team, I couldn’t think of better spot for Jhonas to have an opportunity.”

In the 6-foot-2, 198-pound Kane, the Sabres possess a talented 23-year-old whose character has been questioned following an incident in which he reportedly didn’t show up for a game after some teammates threw a tracksuit – he apparently violated the Jets’ dress code – in the shower.

Murray knew Kane, the fourth pick in 2009, wanted a change of scenery and a more important role, something he believes the Sabres can give him. Kane scored 30 goals in 2011-12.

“He can be can be an important guy here,” he said. “He’s going to be a big part of any success we have, I believe. You watch him play on the ice, he plays hard. He plays in traffic. He doesn’t play a perimeter game; he plays a heavy game. He scores goals from around the net. He plays the game right. He finishes checks. He’s a good fighter. I don’t know how much I want him fighting. That’s his character on the ice.

Parting with the 6-foot-8 Myers, a franchise defenseman and arguably the Sabres’ best player, was difficult. Following some down seasons, the 2009-10 Calder Trophy winner has been showcasing his old form, skating big minutes and moving the puck all over the ice.

The 29-year-old Stafford, the longest-tenured Sabre at nine seasons, will be a free agent this summer and was expected to be dealt. Stafford scored a career-high 31 goals in 2010-11 but struggled for chunks of the past few seasons.

Armia, a slick winger who spent the past two seasons in Rochester, played his first NHL game earlier this season. The 21-year-old Finn was chosen 16th in 2011. Lemieux, meanwhile, a big winger, has 35 goals with the Ontario Hockey League’s Barrie Colts. The Sabres selected the 19-year-old 31st in June.