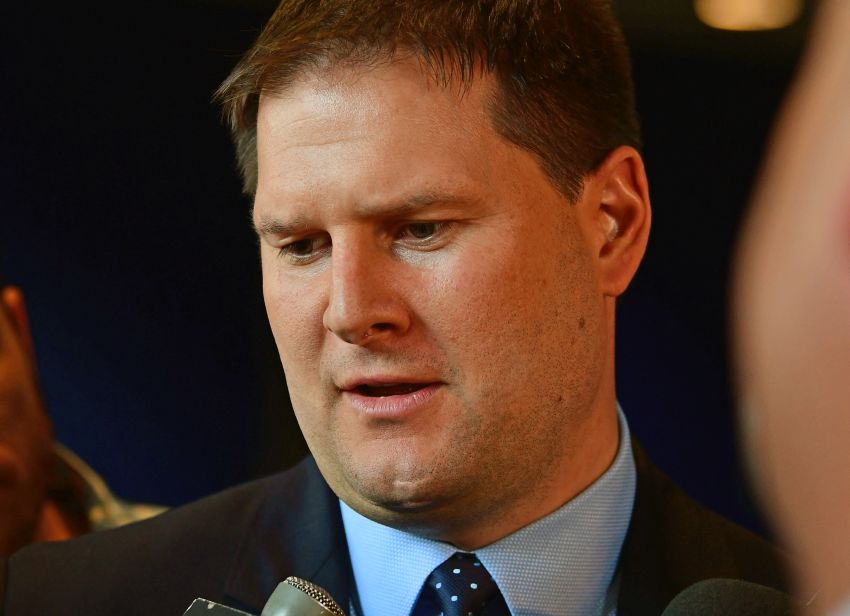 BUFFALO – Two months into Jason Botterill’s first season as general manager, the Sabres are a mess, tied for the NHL’s lowest point total with a measly 16.

A team expected to improve and showcase an exciting style following a last-place finish has regressed and averaged a league-low 2.2 goals through its first 25 games. Slick center Jack Eichel, who signed an $80 million contract extension in October, has struggled along with many of the team’s other top players.

Botterill has remained quiet over the last seven weeks, making no notable moves. In his first public chat with the media this afternoon since training camp, Botterill acknowledged many of the Sabres’ problems while going out of his way to note the positives and growth within the organization.

“I’m optimistic and I’m very happy with our players and especially our coaching staff,” Botterill said inside KeyBank Center.

“Evander’s done a great job for us,” he said. “We’re a team that’s looking for more goals, and he’s scored goals. I think (coach Phil Housley) deserves a lot of credit with Evander. It was one of those situations where he reached out to build that relationship early in the season, and Evander’s come in here and from Day One of training camp has performed very well for us.”

Botterill praised the rookie coach and his staff for their communication skills throughout a rough stretch. He said he hired Housley, in part, because he believed he could build relationships with his players.

“It’s an ongoing thing that he’s doing, but he’s done a very good job communicating with the players of what we’re trying to improve on and what we try to ask for,” Botterill said. “What I’ve really liked is he’s an emotional guy, he keeps guys accountable, and … there’s frustration with the results on the ice, but then the next day, instead of just being disappointed about it, he’s like, ‘These are the things we have to do to improve.’”

Check back later for more from Botterill, including his thoughts on the progress the Rochester Americans have made this season.

In other news, the Sabres waived defenseman Matt Tennyson today. With Zach Bogosian close to making his season debut, the Sabres have nine healthy defensemen.

Tennyson has recovered from an ankle injury.

“Hopefully he does clear, because I thought Matt brought a lot to the table,” Housley said.

Tennyson would likely go to the Amerks if he clears.

Bogosian, who suffered a lower-body injury in the preseason finale, could play in the weekend home-and-home series against Pittsburgh, which starts Friday in Buffalo.

Meanwhile, the Sabres gave goalie Robin Lehner a maintenance day today, so they recalled goalie Linus Ullmark from the AHL to practice.