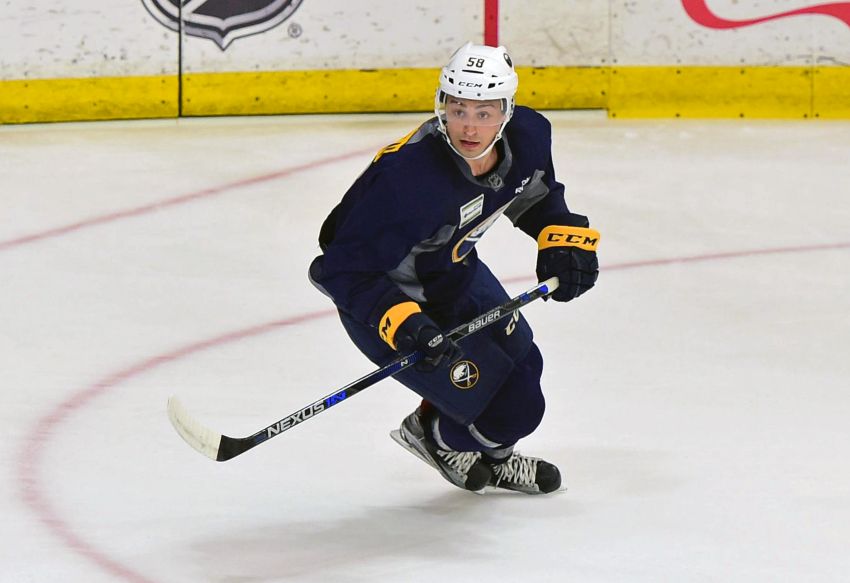 Try Giorgio Estephan, a 2015 sixth-round selection, 152nd overall, who scored 30 goals and 74 points in only 59 games for the Western Hockey League’s Lethbridge Hurricanes in 2015-16.

If you haven’t heard much about Estephan, that might change soon. The 6-foot, 197-pound center has quietly developed into one of the Sabres’ best forward prospects.

Right now, Estephan, 19, is one of the top guys in rookie camp. He pivoted Nylander and Evan Rodrigues on the No. 1 line Saturday most of the Sabres’ 6-3 loss to the New Jersey Devils, the first of two Prospects Challenge games inside HarborCenter.

“It’s real exciting,” Estephan said. “You can kind of see the chemistry between us three.”

Estephan, Kisio said, is a smart player who moves the puck and “makes his linemates better.”

“He’s been working real hard at improving his first couple steps,” he said. “I think he’s getting faster every day. He’s a real solid two-way guy who can play both ends of the ice.”

Estephan utilizes his quick shot by playing “a heavier game” and creating space for himself, Kisio said.

“Anything basically top of the circles down he has a chance to score,” he said.

Estephan said: “A lot of my shots are off of getting myself open, sneaking into holes and making plays for myself. But I think I’m a good passer, also a good two-way forward.”

Having played three games as a 15-year-old before cracking the Lethbridge lineup regularly in 2013-14, Estephan is one of the WHL’s longest-tenured players.

Still, while Estephan produced – he compiled 35 goals and 75 points in his first two seasons – the Hurricanes were a laughingstock, winning only 32 total games in that stretch.

“I’m not surprised, only from the standpoint of the team didn’t have a lot of success here,” Kisio said. “I think if he had been playing for a team that had been doing really well, I think he would’ve went way higher. But do I think it was steal where Buffalo got him? Absolutely.”

Playing a leading role in Lethbridge’s revival last year was special for Estephan. The Hurricanes won more games by Jan. 16 than they had in Estephan’s first two seasons combined. Overall, they went 46-24-1-1, winning the WHL Central Division.

“Extremely proud,” Estephan said. “We put in a lot of work, a lot of dedication to our team. Definitely turning the culture around was something myself and a couple of the other leaders tried to instill.”

“I thought I held my own, and I thought I played pretty well when I was up there,” Estephan said. “It was definitely a confidence booster to know that I can play at the next level and play pretty well.”

Winger Nick Baptiste, who’s skating in his fourth rookie camp, was one of the Sabres’ lone bright spots, scoring all three goals.

“During (last) year I was a little bit more focused on getting points, and tonight was more using speed and doing the things that make me successful,” said Baptiste, who scored 13 goals with the Amerks as an AHL rookie. “Obviously, the offense came.”

Coach Dan Lambert on Nylander, the eighth overall pick in June: “I thought he made a few plays. It didn’t seem like he clicked with his linemates that much. In saying that, I didn’t think we did a very good job of moving the puck up to any forward.”