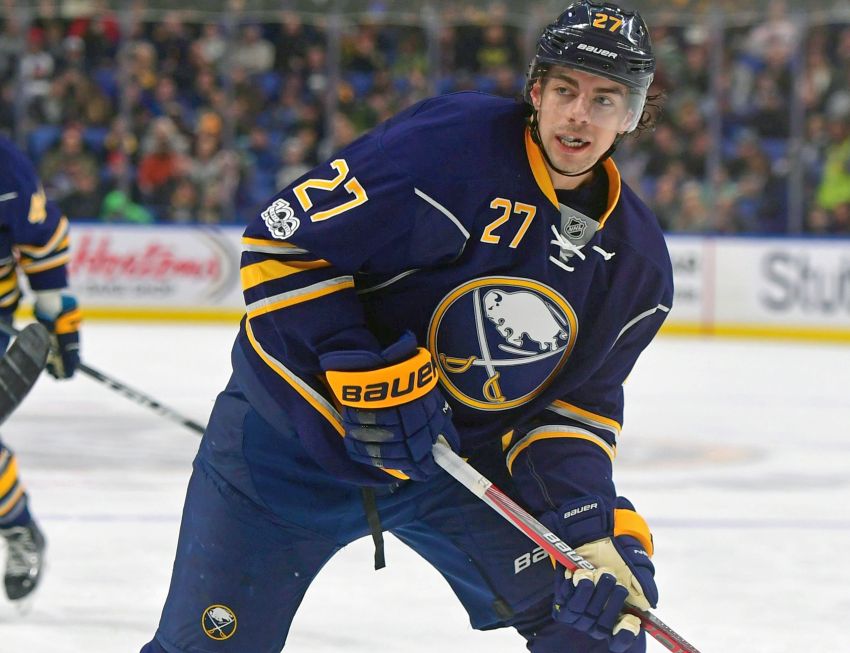 BUFFALO – OK, so if the Sabres need a fourth-line center – they’ve been using Nick Deslauriers sparingly in that spot, forcing them to essentially use only three trios – why did they assign Derek Grant to the Rochester Americans?

“A little bit of waiver wire ruling,” Sabres coach Dan Bylsma said this morning. “No one else put a claim in on Derek, so unimpeded he could be assigned to Rochester. We have 23 guys on our roster right now. So a roster spot would have to be cleared for Derek to be on our roster. That’s the case on paper.”

The Sabres, who lost 2-1 Monday in New Jersey, have eight games in the next 13 days, starting with tonight’s tilt against the San Jose Sharks at KeyBank Center.

Reinforcements might be needed soon. Grant’s stay in Rochester could be short.

“There will be a time when we need some help,” Bylsma said.

In other news, Sabres goalie Anders Nilsson will start tonight, the backup’s 18th nod and 20th appearance. The Swede has performed splendidly at home, going 6-1-1 with a 1.84 goals-against average and a .946 save percentage in eight games.

The rest of the lineup, Bylsma said, will be announced before the contest.

Update: Defenseman Justin Falk is scratched. Taylor Fedun will move back in.

– The Sabres now rank last in shots allowed per game with a whopping 33.7. Yikes! Only once in the last 15 games have they allowed fewer than 30.

– When Tyler Ennis scored late in Monday’s loss – the winger did a spin-o-rama below the right circle and shot the puck from past the goal line – he appeared to channel former Sabres teammate Jochen Hecht, who tried to put the puck on net from all sorts of odd angles.

Ennis said he didn’t see the puck go in the net.

“I kind of heard it hit the back on the net,” he said. “It was a different sound than hitting the paddle or the pads. So I kind of thought it might’ve gone in.”