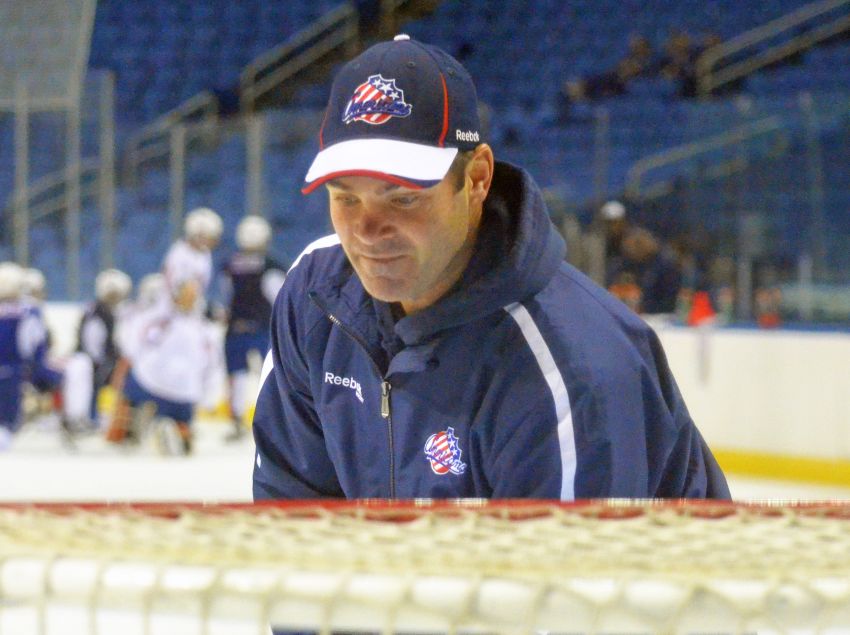 ROCHESTER – Barely a year ago, after 14 seasons with the Americans as an AHL player and assistant coach, Chris Taylor was let go, the victim of new head coach Dan Lambert’s desire to field his own staff.

On Thursday, the Amerks, the Buffalo Sabres’ top affiliate, introduced Taylor as the 32nd head coach in franchise history.

A fired coach, of course, rarely returns to his old team, let alone in a larger role so quickly.

“It’s really odd,” Taylor said inside the Blue Cross War Memorial. “I didn’t think that was going to happen, obviously. It just turned around and things were fortunate.”

The 45-year-old was fortunate because Jason Botterill, his friend and former teammate, recently took over as Buffalo’s general manager. Botterill and Taylor share a mutual respect and have stayed in contact over the years.

“We talked all the time,” Taylor said. “It was one of those things you build relationships with the people you don’t forget.”

When Taylor was let go last year, Botterill arranged an interview with the Pittsburgh Penguins for an assistant job with Wilkes-Barre/Scranton, their AHL club. Despite being the affiliate’s GM, Botterill stayed out of the talk – Bill Guerin and Mark Recchi interviewed him – because of their friendship.

Taylor’s season with the Penguins opened his “eyes up to seeing how different people do it in different organizations,” he said. The constant communication impressed him.

Taylor finished the season running NHL practices for the Penguins’ spare players during the playoffs.

Botterill, who left the Penguins for the Sabres on May 11, knew Taylor grasped how he likes to run an AHL club. Botterill fired Lambert on May 26.

Taylor has inherited a team that hasn’t made the playoffs since 2014. Taylor was still playing when the Amerks won their last postseason series in 2005. They just finished sixth in the North Division, a disappointing finish that helped seal former GM Tim Murray’s fate.

Botterill made a strong commitment to the Amerks on Saturday, signing five or six free agents, including forward Seth Griffith, one of the AHL’s premier scorers.

“Jason and Randy have brought in some really quality people right now, and I think that’s going to change the culture around here – daily habits, practice habits,” Taylor said. “What we did last year in the Penguins organization, I think we’ll bring a lot of that over to the Buffalo and Rochester organization.”

Taylor, an Amerks Hall of Fame member, understands both organizations like few others. After signing with Buffalo as a free agent in 1999, Rochester quickly became his family’s home.

“When I first got here, we loved it,” Taylor said. “We moved our family here. We’ve never moved since. We love the community, how everybody’s treated us, and we’ve loved the whole relationship between the Amerks and Sabres.”

The high-scoring center played 519 games with the Amerks. He played another 90 contests with the Sabres.

Botterill and Taylor helped develop those youngsters. In Taylor’s fourth season with the Amerks, the Sabres signed Botterill, a former first-round pick, for depth. With Taylor pivoting him, Botterill exploded for a career-high 34 goals in only 67 games.

“I didn’t know him at all,” Taylor said of Botterill. “We built a relationship. We were kind of identical in how we believed and the work ethic that we both did, and all of a sudden we were on a line together and everything just clicked.”

Now, Botterill and Taylor are back together.

Taylor has already hired one assistant coach, Gord Dineen, a former NHL defenseman. The 54-year-old has spent the last 14 years coaching in the AHL, most recently as the Toronto Marlies’ associate coach. Dineen was also head coach of the Marlies and Iowa Chops.

Dineen and Taylor won two IHL championships together with the Denver and Utah Grizzlies.

“He’s going to bring stability back to the defense,” Taylor said. “He’s had a lot of winning teams and he knows how to develop young kids.”

Taylor said one more assistant will be added. He said the Amerks have let go of Lockport’s Chuck Weber and Brad Tapper, Lambert’s assistants.