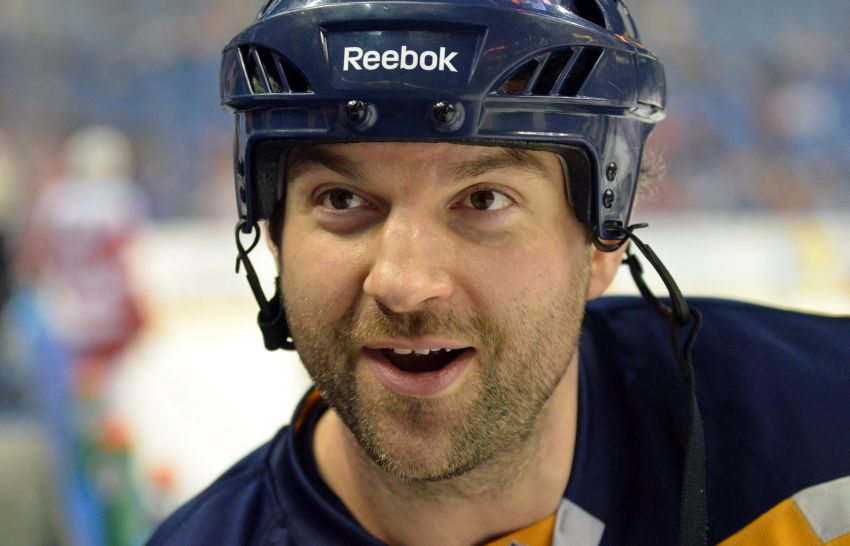 Scott understands his role means he must sit out regularly. Still, the popular former Sabres fighter wanted to play badly in his return to the First Niagara Center.

“It’s always fun to come back,” Scott said prior to the Sabres’ 4-1 win. “I wish I was playing tonight. I could get into a fight, show them what they’re missing.”

Scott, of course, was joking. He misses Buffalo, where he played two seasons.

“I thought there was a pretty good chance I was coming back here, actually,” he said. “But it just didn’t work out.”

Scott’s happy with the Sharks, who signed him to a one-year deal July 2.

The 32-year-old knows he’s lucky. Fighters are going extinct. Several notable ones have vanished from the NHL this year.

“I thought maybe I’d get some interest, and as soon as San Jose kind of came knocking, I jumped at it,” Scott said.

Scott has made his six appearances memorable. He scored his third NHL goal in his season debut, flattened the Islanders’ Mikhail Grabovski in his second game and earned a two-game suspension for his role in a brawl in his fifth appearance.

The 6-foot-8 winger enjoyed his time in Buffalo. He quickly became a fan favorite. His shellacking of former Boston enforcer Shawn Thornton in 2013 might be the most popular Sabres fight in recent memory.

“Obviously, I’m not a scorer or stuff, so I liked the way they embraced me,” Scott said.

Everything off the ice was great. His hockey memories are “tumultuous.”

The Sabres cleaned house during Scott’s tenure, morphing from a veteran team expected to contend for the postseason into the league’s worst club.

“Lot of issues obviously with the upper management, all that stuff, just kind of a very strange couple years with the coaches, the GMs, (Pat) LaFontaine, all that,” he said. “Other than that, it was great. I loved it here. I loved the fans. I loved the staff. You can’t beat it. It was a sad day when I had to leave. …

“I’ll always have good memories of Buffalo, that’s for sure.”

“I love Ted, loved him,” Scott said. “He was a great coach, great motivator, just like a … great guy. I’d do anything for him. He was only my coach for a year. That says a lot about him, he has that kind impression on somebody in that short amount of time. I really enjoyed my time with him.”

With a snowstorm decimating the Southtowns, Nolan said only one player, winger Patrick Kaleta, couldn’t make it to the rink Tuesday. Kaleta was going to be scratched before the storm hit.

“We have to ensure safety first,” Nolan said Tuesday afternoon.

Nolan wanted to see what kind of crowd showed up.

Defenseman Nikita Zadorov hadn’t been told the Sabres plan to keep him on the roster.

The 19-year-old made his ninth appearance Tuesday. His contract kicks in with a 10th.

Fans can exchange unused tickets to Tuesday’s game for tickets to a future game listed below: