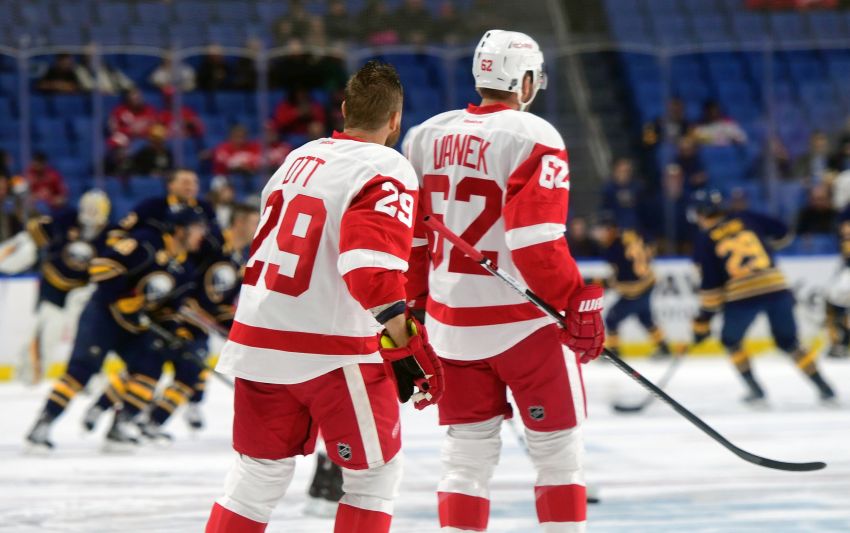 Steve Ott and Thomas Vanek are back together in Detroit. ©2016, Dan Hickling, Olean Times Herald

BUFFALO – Barely three years ago, Steve Ott and Thomas Vanek co-captained the Sabres through one of the roughest months in franchise history, October 2013, before leaving town.

Vanek, who detested the team’s rebuild, went first, getting dished to the New York Islanders just weeks into the season. The Sabres traded Ott, who wanted to stay, to the St. Louis Blues months later.

“It’s been awesome,” Vanek said Wednesday prior to scoring the shootout winner in Detroit’s 2-1 win at KeyBank Center. “Steve and I have been friends ever since he came here. It’s good to have a familiar face come in.”

Ott said: “We’ve had some really good laughs and some good memories that we had.”

Ott, 34, grew up just across the Ontario border in Windsor and always wanted to return home.

“The whole reason why I got the opportunity to sign in Detroit was I wanted to be a Detroit Red Wing,” Ott said. “I grew up idolizing the team. … When you have family you have a chance to play in front of every night at home, it’s something special.”

Meanwhile, Vanek, 32, having just endured a miserable season with the Minnesota Wild that ended in a contract buyout, wanted “to find a team that believes in me just like I believe in myself.”

“I still feel like I can play this game at a high level,” said Vanek, who has four goals and nine points in nine games after registering a second-period assist.

Vanek, whose 254 goals rank fifth on the Sabres’ all-time list, compiled three goals and six points in the first four games before a groin injury sidelined him 11 contests. He returned Sunday.

The scorching start was a strong reminder few scorers are more lethal than the Austrian when they’re at the top of their game.

Vanek’s days as an elite scorer seemed finished. He mustered only 18 goals last season, the first time he couldn’t hit the 20-goal mark, and was even a healthy scratch.

Why did Vanek adjust so smoothly to the Red Wings?

“Thomas is really smart, so I think that allows him to acclimate real quickly,” Red Wings coach Jeff Blashill said. “I think Thomas cares about doing well, and I also think he had a real head start with the World Cup (before the season). I thought the World Cup allowed him to hit the ground running.”

The loquacious Ott, meanwhile, is a gritty fourth-liner who occasionally butts heads with Blashill, something the coach loves.

Ott added: “In good times or bad times you got to show up, be who you are. That’s obviously who I am.”