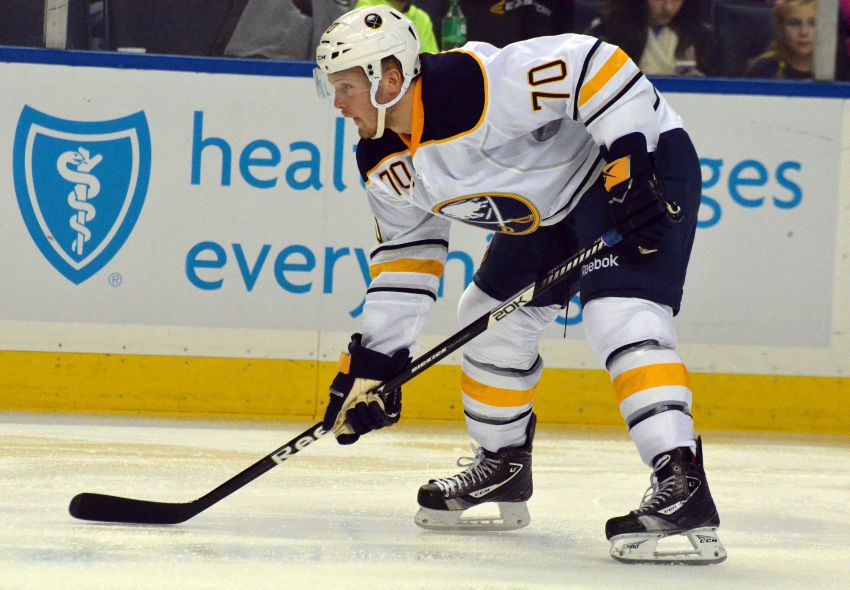 BUFFALO – Alex Biega had finally cracked an NHL roster. For 10 days in December, the defenseman earned a fatter paycheck and practiced with the Vancouver Canucks.

But, oddly enough, the 26-year-old former Sabres prospect never played. He got tantalizingly close to game action once, dressing for the pregame warm-up.

“It wasn’t frustrating, but I guess I was antsy just to get in,” Biega said by phone Wednesday after the Canucks landed in Buffalo. “I wanted to get that opportunity to play. But at the same time, I had a positive frame of mind, and I knew that if you just kept doing the right things and kept keeping the eye on the prize, it would ultimately happen.”

Biega earned another recall from Utica earlier this month, and he debuted Feb. 16, scoring the winning goal in the Canucks’ 3-2 win against Minnesota.

“It was just one of those things where you put your whole life into something and to reach a level, I was just so focused and dialed in, when it actually did go in, I had maybe a three-second delay,” Biega said.

Biega paid plenty of dues, playing 313 AHL contests in five seasons, including 198 under the Sabres, before dressing for an NHL game. The Harvard graduate, the 147th pick by the Sabres in 2006, will play his sixth NHL game tonight inside the First Niagara Center.

“You kind of have to stop and look up once in a while and realize that you’re living your dream and you’re making it happen,” Biega said. “In that sense, it’s been great, and it’s definitely been something I’ve been enjoying every day.”

Bigger defense prospects – both in prestige and physical size – blocked the 5-foot-10 Biega with the Sabres. Still, he enjoyed a regular role playing for AHL affiliates in Portland and Rochester.

“Buffalo had some great defensive prospects in T.J. Brennan, (Brayden) McNabb, (Mark) Pysyk, Joe Finley,” he said. “All those guys got NHL games before me. Looking back at it, all those guys are my buddies and I really enjoyed playing with them. I thought I was definitely really close (to a recall).”

Biega got real close when the Sabres ran out of defensemen late in 2012-13. It appeared he would be summoned from the Americans. Instead, the Sabres signed Chad Ruhwedel out of the NCAA and played him the same day.

Biega signed with Vancouver on the first day of free agency in 2013.

“You definitely go through adversity,” he said. “I’ve learned a lot in (that) league. To me, I look at my years in the AHL not as a waste whatsoever. … The AHL is meant to be a development league. I really took that to heart, and I was blessed to have some great coaches throughout my career.”

Biega just needed an opportunity to showcase his talents.

“It’s a matter of getting your foot in the door,” he said. “That’s a hard part. But the hardest part is staying here and being a full-time NHLer. My first goal was accomplished getting the first game. Now it’s moving on to … making a career here.”

The Sabres sent defenseman Jake McCabe back to Rochester on Wednesday, meaning Nikita Zadorov will likely return from a two-game benching tonight. McCabe played twice during his first recall this season.

The Sabres had Wednesday off, so they had no updates on center Zemgus Girgensons and winger Tyler Ennis, who both left Tuesday’s 4-2 win in Columbus with lower-body injuries.

Girgensons could be done for the season after blocking a shot with his right ankle. Ennis seems to be day-to-day with wear and tear, Nolan said.

Update: The Sabres have recalled Zac Dalpe and Phil Varone.

The league warned Neuvirth following an incident in the Sabres’ 6-2 win over Toronto on Nov. 15. A second citation was issued for an incident 2:23 into the second period Sunday. Mike Santorelli was penalized for goalie interference on the play.