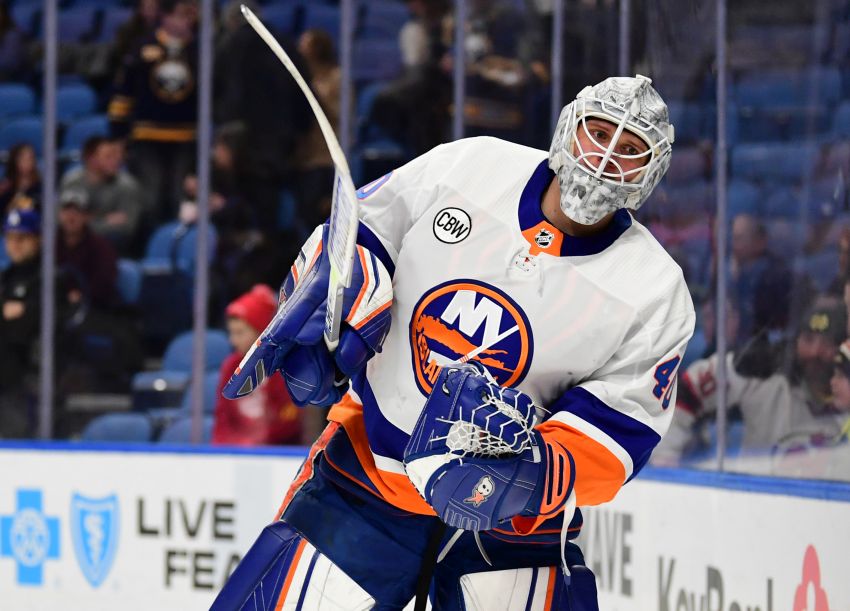 Robin Lehner made his first visit to Buffalo with the New York Islanders on Monday. ©2019, Hickling Images

BUFFALO – Robin Lehner said he couldn’t put a feeling on being back. Sure, it was a little weird sitting in KeyBank Center’s visiting dressing room. The goalie spent three seasons with the Sabres, an experience he’s grateful for.

But Lehner, 27, said he doesn’t want to look back too much.

“I got an opportunity,” Lehner said Monday prior to his stellar 39-save effort in the New York Islanders’ 3-1 win against his old team, a game he later called probably the hardest of his career. “It’s hard to explain. There was a lot of good things that came out of this city for me. I also had a lot of hard times here personally.”

Lehner was going through hell much of his time in Buffalo.

In a harrowing first-person essay for The Athletic New York in September, Lehner described how his drug and alcohol addiction and untreated bipolar disorder led him to contemplate suicide multiple times late last season before seeking help.

Through the NHL/NHLPA substance abuse program, Lehner entered rehab. He was diagnosed “bipolar 1 with manic phases” and ADHD with PTSD and trauma, according to The Athletic. He felt so scared to leave treatment he spent an extra four weeks there.

“I had my issues, I’m working on my issues,” said Lehner, who hadn’t been on the ice here since experiencing a panic attack March 29, his final game with the Sabres. “I’m working every day to be a better person. That’s my new journey. I’m just happy I came to a team with a really, really good organization that’s been showing tremendous support supporting me a lot off the ice and on the ice. I couldn’t be happier.”

Lehner signed a one-year, $1.5 million contract with the Islanders in July. He seems at home with his third NHL team. He has played well, going 9-6-3 with a 2.14 goals-against average and a .930 save percentage in 19 appearances.

While Lehner looked calmer in the net Monday than he did during his Sabres days, he said he was struggling “mentally a little bit in the beginning of the game.”

“It just felt weird,” Lehner said. “(I) somehow just got in the flow.”

The Swede said he has no hard feelings toward the Sabres, who did not tender him a contract in June, making him a free agent.

Even after they let him go, general manager Jason Botterill kept checking in to see how Lehner was doing.

“I couldn’t have finished in a better way,” Lehner said. “I had a great meeting with Jason. … He’s a good man. The whole organization is good people. It couldn’t have been better.”

After Lehner revealed his story, he said former teammates reached out. But he wants to limit some of that contact.

“It’s been a little bit different for me, because I’ve been shielding myself away a little bit,” Lehner said. “I’m focusing on my stuff. I’ve really been trying to focus on my recovery and my career and my life. So it’s been total focus on me and my wife and two kids. Showing up to work every day, that’s what it’s been.

“So it’s nice to see some of the faces over there, there’s some good friends. I like my playing my older teams.”

Lehner said he still keeps tabs on the Sabres, who have enjoyed a terrific season after finishing dead last in 2017-18.

“I’m very happy with how well they’re doing,” Lehner said. “It’s well-deserved. There’s a lot of good people in that locker room that deserve some success.”

Lehner enjoyed very little team success here. At times, he tended some fine goal as the starter for some downright awful Sabres teams.

So far, he has been a major contributor to the surging Islanders, who had won three straight games and six of the last seven entering Monday. He blanked the high-powered Maple Leafs on Saturday, making 36 saves in Toronto.

“Everything was new to me coming into the season,” Lehner said. “What I recognize in this team is a very mature team, very consistent, very emotionally stable team. We’re playing a pretty mature game, I feel.”

Islanders coach Barry Trotz said he’s proud of the steps Lehner has made to change his life.

“When you get the player in a good place, the player can have success, but more importantly, he can have a really productive life,” Trotz said. “That’s why I’m really proud of Robin from the situation that he was in to where he is now is a game-changer not only for him but for us.”

He added: “We’re glad to have him and I think he’s glad to be with us because I know the support he’s gotten from the organization, (general manager Lou Lamoriello) and his teammates and all that.”