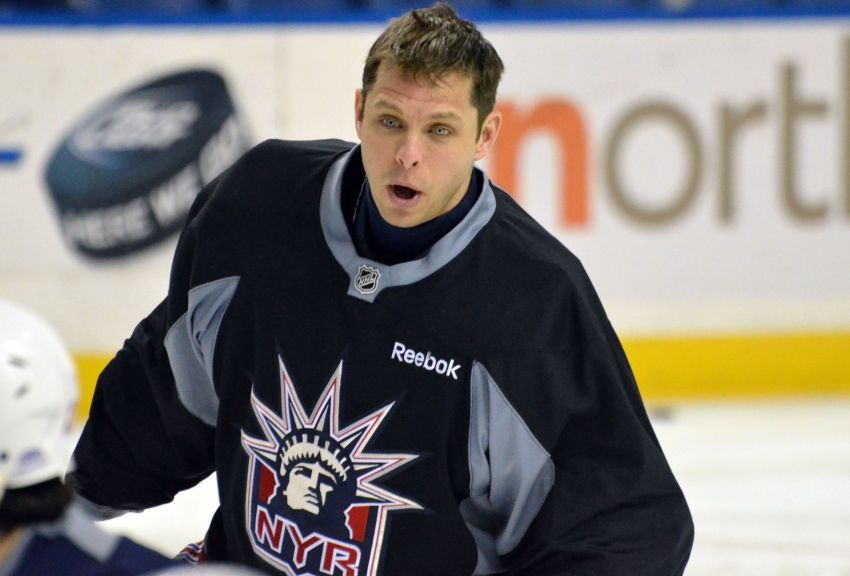 BUFFALO – When the 113-day NHL lockout ended and Martin Biron left his East Aurora home for his backup goaltending gig in New York, the 35-year-old’s wife and four children stayed behind.

With a shortened season, a new house and the school year in full swing, the loquacious former Sabre didn’t want to uproot his family.

For now, Biron’s living alone in New York, an arrangement that has worked out “OK.”

“There’s times I’m sitting for three, four, five hours consecutive in my place over there,” Biron said Tuesday prior to the Rangers’ 3-1 loss to the Sabres inside the First Niagara Center. “I’m like, ‘Well, this is not what I’m used to.’”

After three years playing behind superstar Henrik Lundqvist, Biron has gotten used to being a No. 2 goalie.

Maturity has helped Biron, who played a career-high 72 games with the Sabres in 2001-02, become arguably the league’s best backup with the Rangers.

While he has only played five times this season, Biron began Tuesday sporting a better goals-against average (2.18 to 2.24) and save percentage (.923 to .921) than Lundqvist.

Years ago, Biron wasn’t exactly the hardest-working player. But at 35, he has learned to change mentally and physically.

“Everybody’s going through different stages in their life,” Biron said. “Sometimes you’re young. Sometimes you get it young, you get it older. But once you get it, it’s a big difference. So it feels really good in that sense.

Biron credits goalie coach Benoit Allaire and Lundqvist for creating “a really good situation” for him. Allaire prepares him well. He enjoys a terrific relationship with Lundqvist.

The Sabres must make a roster move to activate Leino. With recent recalls Brian Flynn and Kevin Porter playing well, it won’t be an easy decision.

Rolston likes that, though.

“We want players to make it tough on us to make those decisions,” he said.

No fireworks transpired in the wake of Patrick Kaleta’s scary hit from behind on Rangers star Brad Richards last Sunday in New York.

Kaleta’s still on the sidelines, only four contests into his five-game ban. The Rangers may want to punish the Sabres’ agitator when they visit here again April 19.

Besides, the Rangers, a big disappointment this season, needed to concentrate on winning a game.

Richards, who missed two games after Kaleta knocked him head-first into the boards, scored in his first two appearances after returning.

“It’s over and done with as far as I’m concerned,” Richards said Tuesday afternoon about the incident. “The league took care of what they thought they could take care of, and we’re here to win a hockey game.”