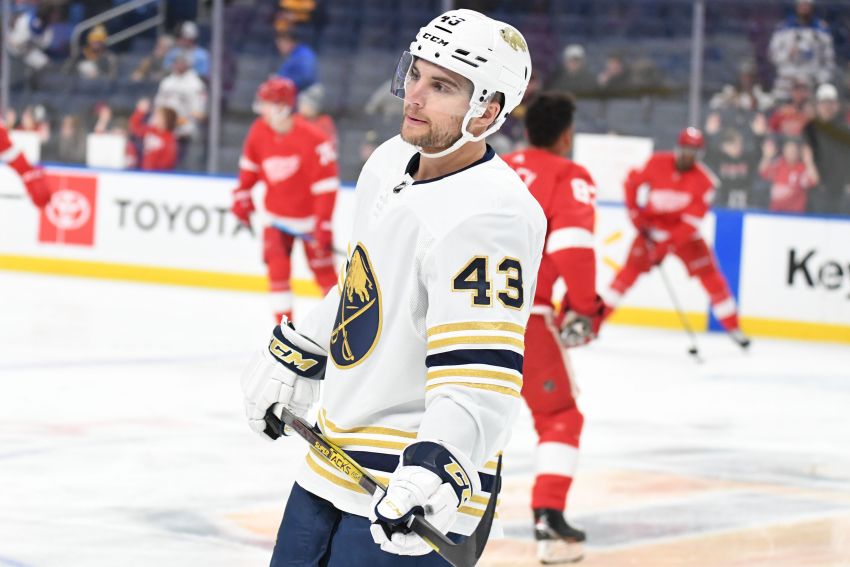 BUFFALO – In a little less than two seasons with the Sabres, Conor Sheary rarely played beside top center Jack Eichel. Instead, the winger often shuffled between the second and third lines as he struggled to score goals.

But in the four games since the Sabres traded him back to the Pittsburgh Penguins with forward Evan Rodrigues on Feb. 24, Sheary has received a plum assignment, skating beside superstar Sidney Crosby.

Sheary has gone from skating short minutes with the Sabres to playing beside perhaps the greatest center of his generation.

Meanwhile, Rodrigues, who struggled to stay in Buffalo’s lineup and wanted to be traded, has earned regular duty on the Penguins’ fourth line, playing in all three spots.

Joining the Penguins has offered Sheary, 27, and Rodrigues, 26, fresh opportunities.

Not only have they quickly carved out roles, they’re playing for a legitimate Stanley Cup contender. While the Penguins lost six straight games before Tuesday’s 7-3 win over the Ottawa Senators, they’re still in third place in the Metropolitan Division.

Right now, the Sabres, who host the Penguins tonight at KeyBank Center, are 12 points out of third place in the Atlantic Division and the final wild card spot. They’ve fallen apart since the trade they dished Sheary and Rodrigues in exchange for winger Dominik Kahun.

Few expected the Sabres would roar back and snare the final playoff spot. But considering how long they’ve ranked among the NHL’s bottom-feeders, creeping within six points before the trade deadline was significant.

Well, barely a week later, the Sabres are finished. They quickly imploded, losing all four games on their road trip. The excitement they generated before the deadline has vanished.

Sixteen games are left this season. The Sabres are playing for pride again.

“We are a group in growth, we are a group with an amazing fightback,” Sabres coach Ralph Krueger said Tuesday. “These guys just don’t quit, which I’m pleased about.”

Sabres defenseman Rasmus Ristolainen said: “Every time you put the jersey on, you represent the organization and the city and the fans. So you at least got to play for them.”

Eichel, who has been battling an undisclosed injury, clearly isn’t himself. The captain has a season-long five-game point drought and compiled an ugly minus-7 rating on the road trip.

In Tuesday’s loss, Eichel registered zero shots on goal for only the third time this season.

The slick center, of course, is the Sabres’ catalyst. Not surprisingly, his linemates, Victor Olofsson and Sam Reinhart, also went pointless during the trip.

“We got some energy out of the line changes,” Krueger said. “There was a push there. Everybody seemed to be skating better and the freshness just brought energy into the group.”

Notes: The Sabres had Wednesday off. … Sheary to Pittsburgh reporters Wednesday on playing the Sabres so soon following the trade: “It’ll be good to get it out of the way.” Sheary, who scored Tuesday, spent some of his first stint with the Penguins playing with Crosby. … Sabres winger Michael Frolik sat out the last three games of the road trip as a healthy scratch.