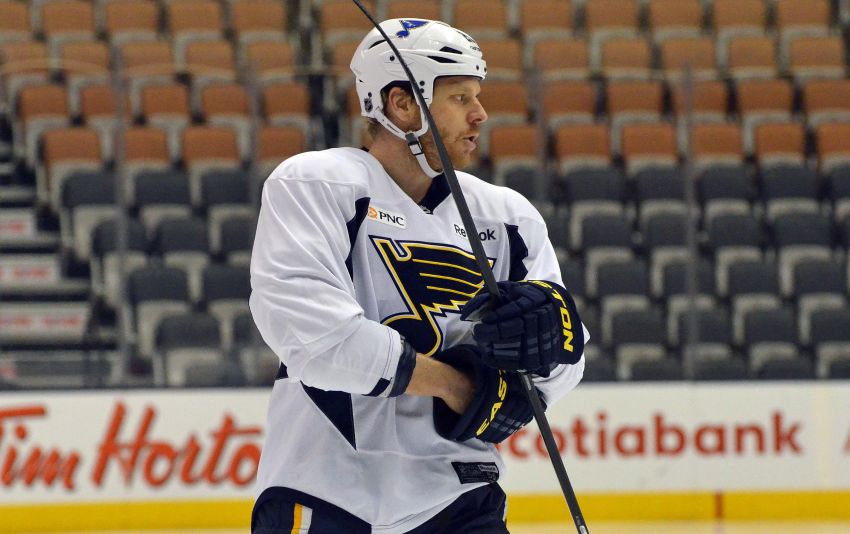 TORONTO – Steve Ott is no longer the guy, just one piece of arguably the NHL’s deepest club, the powerhouse St. Louis Blues. Of course, the popular former Buffalo Sabres captain knew he was joining a special team.

But how good is St. Louis?

Tuesday’s 5-3 win against Maple Leafs was the Blues’ 10th victory in 13 games since acquiring Ott and franchise goalie Ryan Miller on Feb. 28.

Ott won only 17 of the 59 games he played with the rebuilding Sabres, including just eight in regulation. The Blues have nine regulation wins with Ott.

“It’s almost a dream when you wake up when you’re in last place and you wake up and you’re in first place,” Ott said Tuesday afternoon inside the Air Canada Centre.

Make no mistake, Ott’s still high on the Sabres, a team he repeatedly said he didn’t want to leave.

But the gritty 31-year-old winger is excited to be gunning for the Stanley Cup this season. He hasn’t played in the playoffs since the Dallas Stars’ 2008 run to the Western Conference final.

“It was one of the most fun times in my career that I ever had,” Ott said. “All you want is a chance.”

This might be the greatest chance of Ott’s career. The Blues have an NHL-high 105 points and 49 wins. They execute a rigid system under coach Ken Hitchcock and roll four lines.

“There’s not a weak link in the dressing room,” Ott said.

“That makes things easy to come into a dressing room and already know guys,” Ott said. “The dressing room here, for me, was already special. These guys here have all kind of grown up in the process together from basically a basement contender to all the way up to a contender now.

“It’s a close-knit group in here, a lot of fun. They’re very welcoming to Ryan and myself. It made the whole transition very easy.”

Ott’s fun-loving personality has already worn off on new teammates.

“We sit beside each other in the room back in St. Louis,” Blues winger Alexander Steen said. “He’s had me in tears a couple of times before the games. Hilarious guy. I’m really looking forward to getting to know him a lot better.”

Ott’s basically a third-line player with the Blues, skating around 14 or 15 minutes. He had been playing big minutes in Buffalo, upwards of 20 some nights.

Ott’s opinion of the Sabres hasn’t changed. He still believes the club’s future can be bright.

Still, he’s “disappointed” Pat LaFontaine suddenly resigned as the team’s president of hockey operations a day after he left.

“I thought he was a phenomenal man,” Ott said. “I really liked him. I have so much respect for Patty that I had in my short time in Buffalo. (I’ll) continue to do so for a long time. He was a special piece. It was surprising and (shocking). It’s still kind of a weird not to see him help leading that team.”

“I really like Teddy,” he said. “I think he’s a great human and he’s great for a young dressing room of guys, from motivating them to having them play the right way. In my short time there we became pretty close. I’m thankful for the opportunity he gave me.