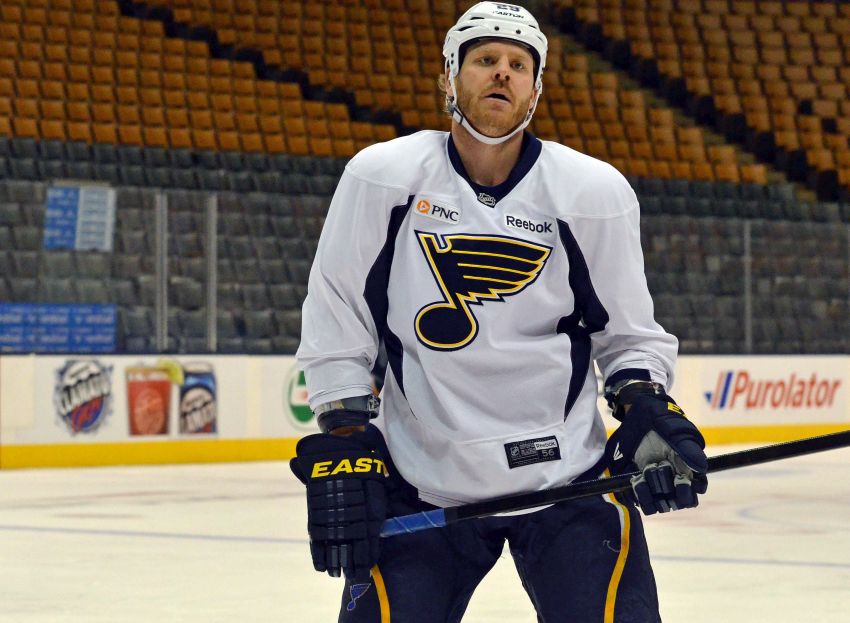 BUFFALO – Part of Steve Ott will always remain with the Sabres. The gritty 32-year-old quickly became one of the city’s most popular athletes during his two-year tenure, his blue-collar style resonating in a hardworking fan base.

“I like to think that I was a part of that organization for the right reasons,” Ott, whose St. Louis Blues host the Sabres tonight, said by phone Monday morning. “When you wear a sweater of a team, it will always hold a piece of your heart. Buffalo definitely does. I truly loved and enjoyed my time there.”

That time ended Feb. 28, when the Sabres traded their captain and goalie Ryan Miller to the Blues in a blockbuster deal.

Ott had repeatedly said he wanted to stay with the rebuilding Sabres, sparking speculation he could re-sign as a free agent in July. A return never materialized, however.

“There was nothing from Buffalo, to be honest with you,” Ott said. “I think they were going on a direction completely different. Obviously, when I found that out, then I had to realize where I was going.”

Ott stayed put, signing a two-year, $5.2 million deal with the Blues on July 10. By then, the other name free agents had inked deals.

“It was very interesting, to say the least,” Ott said about the summer. “Ups and downs, ins and outs. I had to make a few life decisions in the sense of where you feel most comfortable going in.”

The forward found comfort in St. Louis, one of the NHL’s powerhouses.

“My biggest thing is I wanted to go to a team that had a chance to win on a nightly basis, a chance to win the Stanley Cup, and I thought my best chance was coming back to St. Louis,” Ott said.

Ott has embraced a new role with the Blues. He often skated on the first line with the Sabres last season, playing 20 minutes some nights. These days, he’s just one part of a puzzle. The Blues possess some of the NHL’s best depth, meaning Ott now plays about 14 minutes.

“I think I’m obviously a depth player on a team that’s full of a lot of good players in the top 12 forward spots,” Ott said. “I’m a heavy penalty killer. I’m a guy that jumps around the lineup for the coach, wherever he needs me – left wing, center, right wing, from top lines to bottom lines. Whatever the opportunity arises to make our team better is basically my role.”

“Yeah, it’s not fun,” he said about his drought.

“I feel like I’m kind of in a spot in my career where winning’s the most important thing,” he said. “If it means sacrificing some of my own statistical categories and whatnot to be on a team that has a chance to win every single night, I take that. I think that’s where my mindset is.”

Ott doesn’t believe he has entered a new phase of his career. Following sports hernia surgery in May – “You don’t know how bad it was until you have it fixed,” he said – he feels refreshed.

“I feel like I have a ton of game left in me,” he said. “I feel great skating around on the ice. I feel quick still.”

“We have great goaltending,” he said. “Our defense are very solid. Our core group … you have guys that on some teams could be first-liners, and on our team they could be third- or fourth-liners. That’s a testament to building a team for a chance to win.”

The Sabres, meanwhile, are still struggling. Ott has many close friends on the team. He planned to invite some to dinner at his house Monday night.

“It’s tough on all those guys that get dressed every single night,” Ott said about losing. “They don’t want to lose. They all have pride as a hockey player and want to have success. That’s the hardest thing … living not up to, I guess you’d say, the potential of the team, because I know they could be a good team. …

“The good thing is they have some great players coming that are continuing to get better that are young. But I also know the internal drive of a lot of those guys, and they care. It’s definitely a pride thing. I hope they turn it around or continue to build onto something there.”

Sabres coach Ted Nolan on Ott: “I have really fond memories of Steve Ott, no question. The one thing about Steve, he competes, he competes hard. Watching him from afar, I wasn’t a big fan of his, because of that factor. But when you’ve got him on your team, you love him. But now he’s on the opposition.”

Ott on his Buffalo memories: “Me and the wife, we talked about it all the time, we had a blast in Buffalo. We had a great time with the community, the fans, the organization was phenomenal. You wish we had a better opportunity in the sense of it wasn’t a whole rebuild, but sure had a good time being in the leadership group there and kind of being a part of that community.”