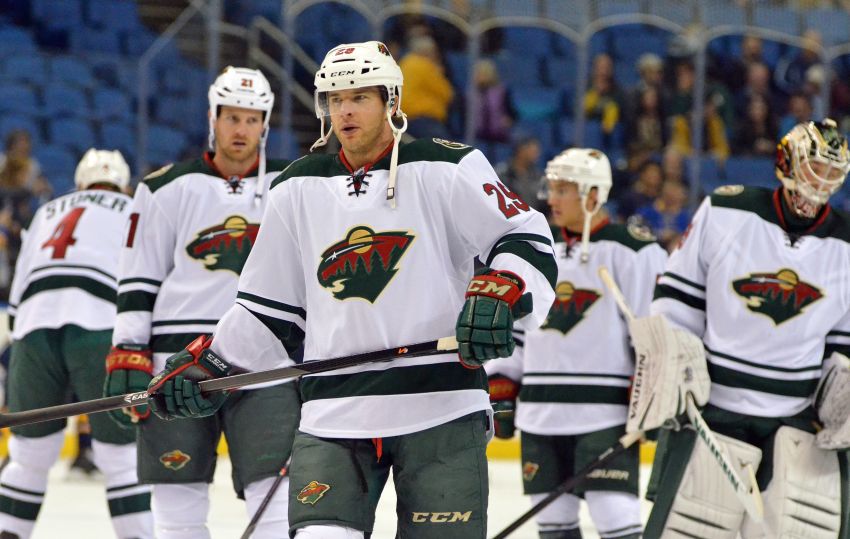 Jason Pominville had never skated in the First Niagara Center as an opponent before Monday. ©2013, Dan Hickling, Olean Times Herald

BUFFALO – Once the initial shock of getting traded to the Minnesota Wild in April started wearing off, former Sabres captain Jason Pominville said he “really took a step back” and began examining his new gig.

Pominville was leaving a team beginning a rebuilding process for the upstart Wild, a club constructed to win the Stanley Cup immediately.

The Wild had just signed stars Zach Parise and Ryan Suter to huge twin contracts. Many believed Pominville’s surprising acquisition could help transform the team into a Western Conference power.

“For my career, it might be the best thing to go to somewhere where the teams are heading in completely different directions,” Pominville said Monday before scoring the winner in the Wild’s 2-1 win, his first-ever game as an opponent inside the First Niagara Center. “Obviously … they want to win and they want to win now.”

Pominville has settled in nicely with the Wild after 11 seasons in Buffalo’s organization. The winger recently signed a five-year, $28 million extension.

“I think I was able to turn the page pretty quick, to be honest with you,” Pominville said. “The hardest part for me was the family, just having to move everyone there. That was the toughest part. But the playing hockey was just different guys, different people around me. But that was the easy part.”

Still, Monday was an emotional day for the 30-year-old. The Sabres selected Pominville 55th overall in 2001, and he grew up with them, developing into arguably their best all-around player and a franchise cornerstone.

His series-clinching overtime goal as a rookie in the 2006 Eastern Conference semifinal is one of the top moments in franchise history.

“Just walking in, there’s so many, so many good memories,” Pominville said. “The back-to-back conference finals (in 2006 and 2007) is just something I’ll never, never forget. Whatever it was, 10, 15,000 people outside. It was just phenomenal. Just great memories, for sure.”

The Sabres never acknowledged Pominville’s presence, although they mentioned journeyman Kevin Porter’s 200th NHL game on the scoreboard. But when Pominville’s name was announced in the starting lineup, fans gave him a warm ovation.

Pominville was later asked to submit his no-trade list.

“I’ve been here for a while,” Vanek said. “I’ve seen a lot of teammates leave.”

Sabres defenseman Henrik Tallinder said he “almost kept walking the corridor to this locker room” when he played here with New Jersey in 2010.

Pominville skated on line with Mikael Granlund and Dany Heatley, an old rival from Ottawa.

With Tallinder (upper body) back from a four-game absence, the Sabres sent Alexander Sulzer to Rochester to create room on the 23-man roster.

Weber skated beside Jamie McBain. Tallinder was back beside Tyler Myers.