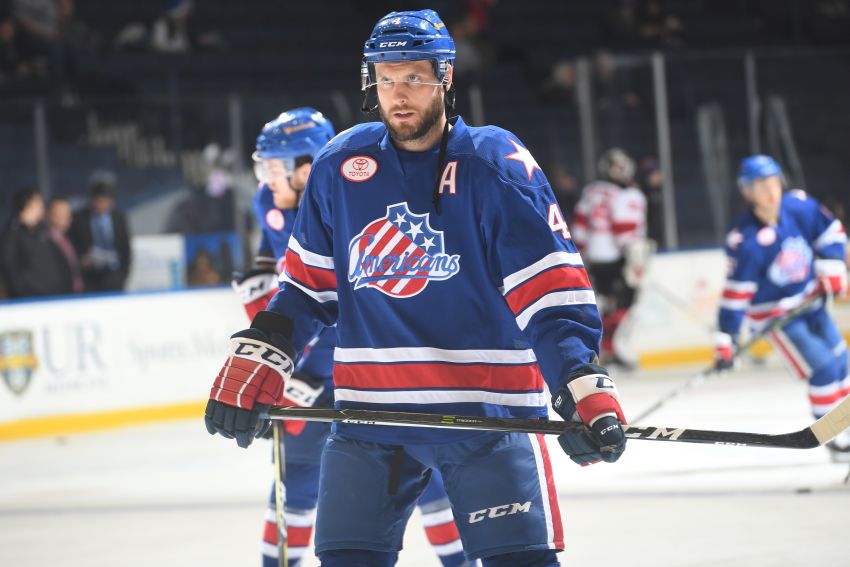 ROCHESTER – The second phase of former Buffalo Sabres defenseman Nathan Paetsch’s career has been rewarding, even a bit unlikely.

Five years ago, Paetsch transitioned into a veteran role helping develop Detroit Red Wings prospects. He won two Calder Cups with the Grand Rapids Griffins, playing a vital role well into his 30s, an advanced age for the AHL.

Now, Paetsch has come full circle. Fourteen years after starting his career in Rochester as a Sabres prospect, he’s back with the Americans this season.

Once known for his offense, Paetsch has evolved – “You got to reinvent yourself if you want to keep playing,” he said – into an asset for his mentoring and penalty-killing skills.

At 34, he’s the Amerks’ oldest player by nearly three years.

“A lot of older guys in this league, they can’t transition to that more mental role and kind of take a backseat to (playing special teams),” Paetsch said Monday following the Amerks’ 2-1 shootout loss to the Utica Comets inside Blue Cross Arena. “I’ve embraced it, I really enjoy … helping out the younger guys.”

Paetsch mentored well with Detroit, an organization known for producing homegrown talent. Despite captaining the Griffins to a championship last season, the Red Wings passed on re-signing him.

So Paetsch wanted to return to Rochester, his home for more than a decade. His wife, Jaclyn, is from nearby Spencerport, where they reside with their children.

“This was always option No. 1,” said Paetsch, who signed a one-year AHL contract Sept. 12. “It was a long summer, but it ended up working out for the best in the end.”

Paetsch, who left the Sabres in 2009-10, has strong connections from his first run in the organization. He played with Amerks coach Chris Taylor and Sabres general manager Jason Botterill as a youngster before graduating to a four-year stint in Buffalo.

Paetsch said he stayed in contact with Taylor over the years and kept an open dialogue with him about returning.

Playing for his friend, Paetsch said, has been “awesome.”

“Even when I played with him I knew he was going to be a great coach because he was a cerebral hockey player, he was always the smartest guy on the ice, he was … going to transition well into coaching,” said Paetsch, who had a career-high 24 points in 63 games for 2006-07 Sabres club that finished first overall.

While the Amerks have lost three straight games, with 23 wins in 41 tries, they’re off to their best start in years. So far, Paetsch’s on-ice contributions have been limited to five games. A broken leg he suffered Oct. 13 sidelined him almost three months.

Still, even injured, Paetsch, a veteran of 167 NHL games, quickly immersed himself in the team.

“The first job is to make it successful here so that transitions into Buffalo,” he said. “That’s the long-term goal of the organization. That’s why they bring a person like me in, to help these young guys, because they are the future of the Buffalo Sabres.”