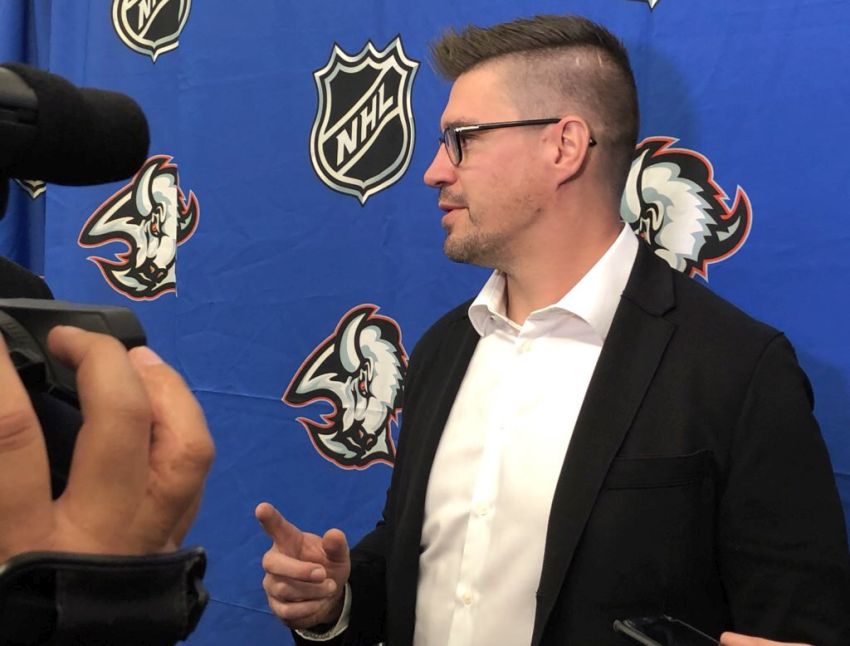 BUFFALO – After Jochen Hecht retired from the DEL in 2016, the former Sabres forward spent two seasons coaching with his hometown team, Adler Mannheim.

One of his players, defenseman Mark Stuart, played 673 NHL games over 12 seasons.

On Nov. 7, 2009, Hecht fought for the fifth and final time in his NHL career against, of all opponents, Stuart, according to hockeyfights.com.

After a coaching change, Hecht was put in charge of Mannheim’s defensemen.

“I never played D as a professional, and then I got to tell (Stuart) what to do out there,” said Hecht, one of 15 former captains the Sabres honored as part of their 50th anniversary celebration before Saturday’s 7-2 win against against the New Jersey Devils.

Following his short run on the bench – “It was a lot of fun,” Hecht said – he started scouting for Mannheim, the team he played three seasons with after he left the Sabres in 2013.

Hecht, a huge piece of the Sabres’ rollicking post-lockout teams of 2006 and 2007, was thrilled to be back in a city that remains close to him.

The German spent 11 seasons with the Sabres, morphing into one of their top two-way forwards.

When former Sabres coach Lindy Ruff rotated the captaincy monthly in 2007-08, he awarded the ‘C’ to Hecht in October and February.

“I feel honored that I was asked to come in, be a part of this group of special captains,” Hecht said inside KeyBank Center. “I had a great time. I pulled into the town, got to the airport, and it still feels like home.”

Hecht, 42, sounded a little nostalgic talking about his memories of the city and the special teams he played for in the mid-2000s.

Hecht said winger Jason Pominville’s series-clinching overtime goal against the Ottawa Senators in the 2006 Eastern Conference semifinal convinced the Sabres they had the talent to win the Stanley Cup.

“That was the moment where everybody thought we could go really deep here, win this thing,” he said. “I think we had the team at the time.”

The Sabres made the Eastern Conference final two straight seasons and won the Presidents’ Trophy in 2006-07. While they fell short of the Stanley Cup, those teams hold a special place in the heart of fans and players.

“We had a lot of fun,” Hecht said. “We were a lot of fun. We were a tight group, and when things didn’t go well, we had some fun off the ice, too. That kept us together and working for us each other.”

These days, Hecht scours Germany and Switzerland looking for talent.

“The first thing we look for is skating ability, quickness and then hockey sense,” he said of scouting. “Those are the (three) major things. Everything else you can work on.”