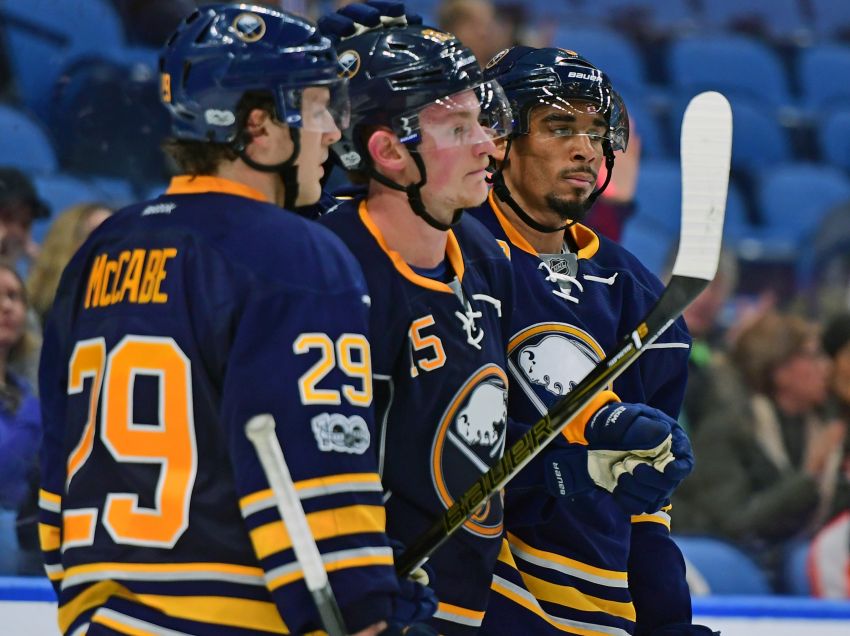 BUFFALO – It’s happening. Less than two years into his career, center Jack Eichel, the ultra-talented youngster the Sabres gave up an entire season to draft, is morphing into an offensive superstar.

Eichel, 20, is on fire. Since Feb. 1, Eichel leads the NHL with 24 points. With two goals and three more points Tuesday, he extended his career-long point streak to 11 games. The youngster now has 101 NHL points in just 127 games.

But what have the reeling Sabres accomplished during one of the franchise’s most productive offensive runs in recent memory? Almost nothing.

The Sabres lost again Tuesday, falling 6-3 in an ugly blowout to the Philadelphia Flyers before 18,233 fans inside KeyBank Center.

Clearly, the sloppy Sabres, who blew a three-goal lead in Sunday’s 4-3 loss in Pittsburgh, hadn’t gotten over that demoralizing setback.

“We weren’t ready to play the game, that’s what it looked like,” Sabres coach Dan Bylsma said. “Maybe a little shell-shocked, maybe back on our heels from the previous game.”

After Eichel tied it 7:14 into the second period, the Flyers scored four unanswered goals before Eichel scored again late. When Travis Konecny scored 5:21 into the third period, most of the surly crowd bolted for the exits.

And Eichel, for all his dynamic offensive exploits, is still a raw talent. His turnover that created Matt Read’s goal 4:34 into the contest drew Bylsma’s ire.

“You talk about puck management, you’re trying to go through three guys, one-on-three in the neutral zone,” said Bylsma, who sat Eichel for a shift after that.

Turnovers, in fact, led to the Flyers’ first three goals.

The Sabres have endured a string of rough losses in the last two weeks, including three in which they blew a third-period lead. They’ve responded to adversity regularly this season, but fresh off Sunday’s loss, the sting of the Pittsburgh defeat might’ve finally gotten to them.

The Sabres, whose faint playoff hopes are basically extinguished, still have four teams to climb to reach the final wild card spot.

Since inching toward a playoff spot one game before their bye began two weeks ago, the Sabres are 1-5-2. They’ve lost three straight games (0-2-1). Their only win in that span was against hapless Arizona.

“We got to decide how we’re going to get back here and play these last 15 (games),” Bylsma said.

The period, however, was pretty bad.

“Kind of felt fortunate to leave the game 1-1,” Bylsma said.

Radko Gudas put the Flyers up 4:58 into the second period. After Eichel tied it, Jakub Voracek’s pass to Jordan Weal hit his skate and slid past Sabres goalie Robin Lehner.

The Flyers also appeared to get some breaks on their later goals.

Sabres defenseman Cody Franson said: “The biggest thing for us right is puck management that turned into quick chances that turned into extended zone time that changed momentum in the game.”

“It’s frustrating to go through this,” said Lehner, who received some mild Bronx cheers following a late save. “We all got to do better. It’s not one guy or two guys. It’s a team game with a lot of different things. I got to come up with another save.

“You’re going to have games like this, and it’s terrible timing. … I’ve been through stuff like this before. It’s tough. We want to be better for our fans. … We could clearly hear the disappointment in our building.

“It’s been a long season. We’re disappointed where we are. I’ve went through this before. It rinses off me pretty easy.”

2 thoughts on “Flyers throttle Sabres: ‘We weren’t ready to play’”