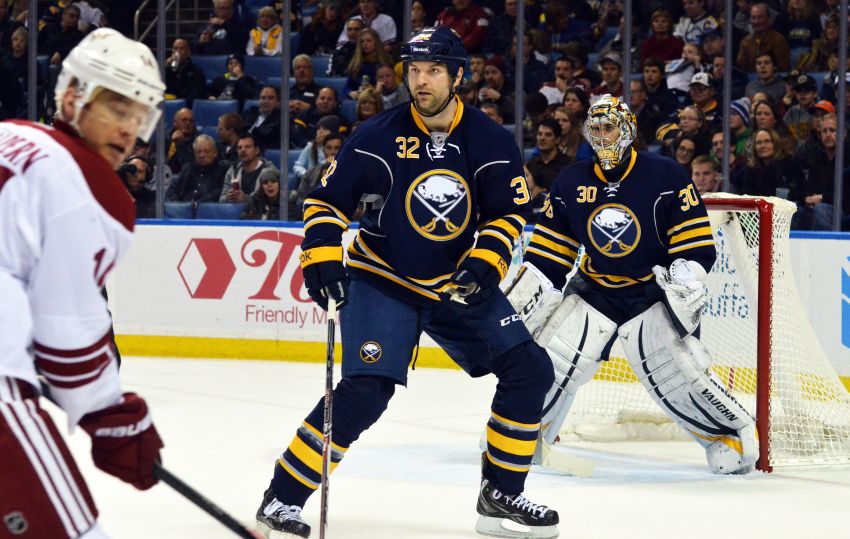 BUFFALO – Good thing the NHL’s three-day Christmas break begins today. A flu bug ravaging through the Sabres forced them to dress only 16 skaters for Monday’s 2-1 overtime win against the Phoenix Coyotes inside the First Niagara Center.

The Sabres scratched forwards Marcus Foligno, Ville Leino and Linus Omark and defenseman Alexander Sulzer, all of whom played Saturday.

With just 10 forwards available, interim coach Ted Nolan switched tough guy John Scott, a winger in recent seasons, back to defense, his natural position before Drew Stafford was ejected for elbowing. The Sabres rolled three forward lines. Scott later moved up front and even played on the power play.

Nolan said players called Monday morning and said they couldn’t make it out of bed. The Sabres had a practice scheduled for Sunday, but he canceled it with so many ill.

The Sabres are also missing center Cody Hodgson (hand) and forward Kevin Porter, who was hit along the boards last game.

They recalled forward Johan Larsson and defenseman Mark Pysyk from Rochester on Monday morning. Defenseman Chad Ruhwedel was sent back to the AHL.

But with the Americans leaving Monday for the upcoming Spengler Cup tournament in Switzerland, the Sabres couldn’t recall any additional players.

Larsson had one assist in 17 NHL games earlier this season before the Sabres sent him down Nov. 19.

Larsson, who centered Stafford and Steve Ott in his return, had two goals and nine points in 13 AHL games.

Nolan said the Sabres recalled the 21-year-old Swede because he’s been competing hard.

“Mark’s a great young player,” Nolan said. “But a lot of organizations he probably wouldn’t be playing at this age. So we want to make sure he matures a little bit more. He’s going to be a good NHL player.”

What did the Sabres tell Pysyk they wanted from him?

“Just consistency,” he said. “You have to be more consistent to stay here and get a little bit strong on the puck and stronger on my skates.”

Pysyk, an NHL regular all season, wasn’t surprised he went down.