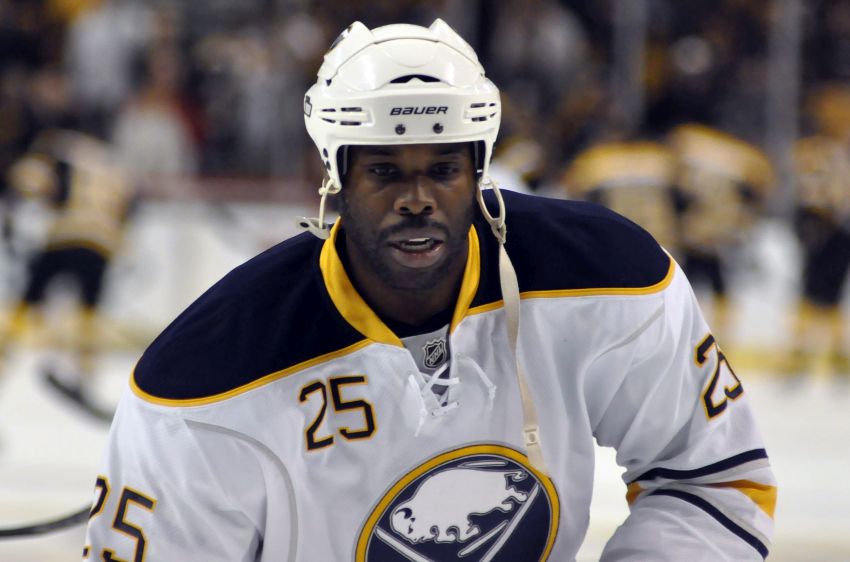 Mike Grier played for San Jose in between his stints in Buffalo. ©2022, Dan Hickling

Grier, 47, spent three full seasons and the end of another with the Sabres, becoming one of their most respected veterans. The Sabres haven’t made the playoffs 2010-11, his last season.

The American played three seasons with the Sharks in between his stints with the Sabres. He most served as a hockey operations advisor for the New York Rangers.

BUFFALO – The hockey world first met Mike Grier from Holliston, Mass., more than 26 years ago, before eight of his Sabres teammates were even born.

On June 18, 1984, Sports Illustrated’s “Faces in the Crowd” profiled 9-year-old Michael Grier of the Holliston Mites, a star defenseman fresh off a dynamic season in which he tallied an incredible 114 goals and 157 points in only 62 games!

“That’s a long, long time ago,” a laughing Grier said Tuesday inside the Northtown Center in Amherst after the Sabres, losers of all five of their contests at HSBC Arena and three straight overall, prepared for tonight’s game against the Boston Bruins.

“I don’t think it was that big of a deal,” Grier said.

OK, but tonight, when the likable Grier becomes only the 253rd player in NHL history to play 1,000 games, should be a big deal. He will become just 30th American to reach the milestone.

“I’ve been lucky to be relatively healthy,” Grier said. “I think that’s the main thing, just longevity, being able to play and have success. It’s something that kind of blows my mind.”

Sabres captain Craig Rivet, who also played with Grier in San Jose, believes it takes “a special player, a special person” to have his friend’s longevity.

“Mike is one of those players,” Rivet said. “(He’s) a well-rounded player. He’s the ultimate teammate. I’m very happy for him.”

Sabres coach Lindy Ruff added: “Heck of a career. To play the number of games he’s played is special.”

“It’s kind of a blur,” Grier said about his first game. “I don’t even remember too much about it. It goes by quick. That’s one thing I’m aware of now. The years kind of all blend together. You got to enjoy it while you can.”

Back then, Grier was a hyped rookie good enough to bypass the minors. He had become an NCAA star at Boston University, winning a national championship as a sophomore and scoring 50 goals over his final two seasons. He tallied 20 goals twice with Edmonton, but hasn’t hit the mark in 10 years.

Instead, unlike his childhood days, the 35-year-old has carved out a niche as a supreme checker and penalty killer with coveted leadership skills.

“It’s kind of transformed over the years,” Grier said of his role. “My first few years in the league I was a little bit more of an offensive guy, a power play guy in front of the net, stuff like that. As I’ve gone along I’ve kind of taken a little more of a defensive role.”

The Sabres stole Grier from Washington at the 2003-04 trade deadline for the rights to Jakub Klepis, one of the franchise’s best deals ever. Ruff didn’t know much about him then, but had “heard a lot of good things about him.”

When the lockout ended in 2005-06, Grier quickly became one of the Sabres’ linchpins, helping them get within a game of a Stanley Cup final appearance.

“That was probably the most fun year I’ve had playing hockey,” Grier said. “I learned a lot from Lindy, a close group of guys. It gave me confidence to go on. I went to San Jose for a few years. It kind of gave me confidence in my game and how to play and what it takes to do things in the playoffs.”

The Sabres never really recovered from Grier’s departure. In the three years he was gone, they made the playoffs only once as they desperately searched for player of his ilk. When they re-signed him in August 2009, they had found a missing piece.

“He makes everyone feel at ease when you’re around him,” Rivet said. “He’s one of the hardest-working players that I’ve ever played with, a guy that always has a great attitude. It’s a great milestone for Mike. He’s put in a lot of hard miles to get to that 1,000th game, and he deserves it.”

Grier hopes he can play a couple of more seasons. Finishing his career with the Sabres would be icing on the cake.

“My family likes it here,” Grier said. “We’re enjoying it, and (to) finish with a good group of guys that I’ve been through a lot with, the ups and downs and the grind of a season … would mean a lot.”