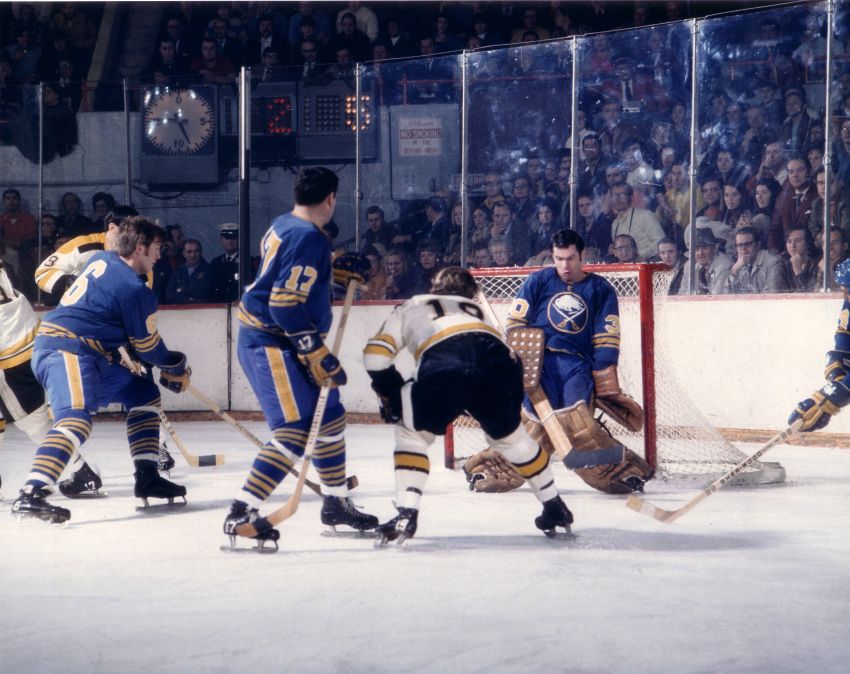 Joe Daley played one maskless season with Buffalo before putting on protection later in his career. Photo courtesy of Joe Daley

Fifty years ago today, the Buffalo Sabres played their first game, beating the Penguins 2-1 on Oct. 10, 1970 at Pittsburgh Civic Arena.

Jim Watson and Gilbert Perreault scored for the Sabres that night. Roger Crozier, whose presence offered the expansion team instant credibility, made 35 saves.

Crozier’s goalie partner that inaugural season was a journeyman named Joe Daley, a 27-year-old who had spent most of his career in the minors.

Daley played just one season in Buffalo, yet he’s the answer to two trivia questions.

Who was the first Sabre? General manager Punch Imlach grabbed Daley off waivers shortly before he drafted Perreault.

Daley is also the only goalie in franchise history who regularly played without facial protection. Yes, in 1970-71, Daley was one of three netminders who still dared to go maskless.

I wrote this story on Nov. 1, 2009 – the 50th anniversary of legendary Montreal Canadiens goalie Jacques Plante putting on a mask – to learn more about Daley.

Thirty-nine years ago, Joe Daley possessed so much self-doubt, he tended goal in the NHL without a mask.

“That’s how insecure I was about my position,” said Daley, the first member of the original 1970-71 Sabres and the franchise’s only bare-faced goalie, by phone Friday from his sports card store in Winnipeg. “I was always so scared about giving up goals that might’ve been the fault of poor vision or something.”

Fifty years ago today, Montreal’s Jacques Plante donned a mask in game action after a shot struck him in the face. While goalies had worn face protection before, Plante’s fiberglass contraption led to universal mask use by netminders.

But the mask wasn’t omnipresent overnight. By the early 1970s, a few stubborn goalies still played sans protection. Daley was one.

“It was something I never thought about because I had never really attempted to wear one through my youth or junior hockey or coming up through the minor leagues,” Daley said.

Daley said he never had a macho hockey attitude. He was just comfortable playing without a mask. He learned to play without one. It was all he knew. He never feared he would get hurt.

“(I) didn’t think it altered the way I played,” he said. “I certainly didn’t go into games thinking about, ‘What if I get a bad shot in the head?’ or anything like that. That just didn’t seem to be part of my makeup at the time.”

Daley said players tested him respectfully. He believes no one ever tried to intentionally hurt him.

“Bobby (Hull), when he was in Chicago, he wouldn’t drill one at your head,” he said. “He would flick one; sort of get you up on your toes for the next one that he’d be driving along the ice. It was more of a cat-and-mouse game that you would have with him.”

Daley endured one severe injury. During his last game with Pittsburgh in 1969-70, a Gerry Meehan shot broke his jaw. The two became teammates the next season in Buffalo.

“It was an awful blow,” Daley said, “because I had to have it wired up for six or eight weeks. So that wasn’t pleasant. But it didn’t scare me enough to say, ‘Gee whiz, this is a risky position. I better put one on.’”

Red Kelly, his coach with the Penguins, had adamantly tried to get Daley to put a mask on.

“I really wasn’t keen on it,” Daley said.

Daley still refused to wear one when Kelly sent him to the minors.

“They had seen me play later in that year and were wondering why I was playing well,” Daley said. “I said, ‘Well, I really didn’t want to wear a mask, and I don’t think anybody should be forced to if they’re not so inclined.’ So that was kind of my attitude.”

Following the season, Imlach traded him to Detroit for Don Luce and Mike Robitaille. Daley played 29 games with the Red Wings in 1971-72, and then left for the upstart World Hockey Association.

About the time Daley joined the Winnipeg Jets in 1972, only two other goalies – Andy Brown and Gump Worsley – still played without protection.

In Winnipeg, Ernie Wakely, Daley’s goaltending partner, encouraged him to try a mask. The two alternated games. Wakely wanted to keep it that way.

“Ernie suggested, ‘When it’s my night off, I want a night off,’” Daley said.

Finally, as a 31-year-old in 1974-75, Daley broke down and had someone in Ottawa make him a mask. He began protecting his face after more than 500 professional games.

Worsley had started wearing a mask shortly before he retired in 1974. Brown, who left the NHL in 1974, was the last goalie to play without one.

By the time Daley started sporting a mask, his confidence had blossomed. He had a nice contract with Winnipeg. He felt a sense of security.

“I got quite used to and comfortable with the one I had made,” Daley said. “You had to make a few adjustments in turning your head a little more and so forth, but once I got used to it, I found it handy.”

One time during warm-ups, Anders Hedberg hit Daley between the eyes from 10 or 12 feet away, knocking him out cold, he said. Daley made his start, however.

“I’ve often said to people, ‘I don’t want to think about what might’ve happened had I not had a mask on that night,’” he said. “It might’ve ended my career right there.”

Daley retired in 1979, months before the WHA folded and the Jets joined the NHL. He’s operated his memorabilia store, Joe Daley’s Sports Cards, for the last 20 years.

He hasn’t returned to Buffalo since he left the NHL. He said friends sent him photos as Memorial Auditorium was torn down earlier this year.

Hockey hasn’t forgotten him. A recent trading card set celebrating the 1972 season included Daley, who was one of the WHA’s better goalies.

He still follows hockey closely, too, watching games and keeping tabs on the goalies.

“I see how many times a goaltender takes one off the mask or the head,” Daley said, “and I’m thinking, ‘Now I know why they have afforded themselves such protection.’”