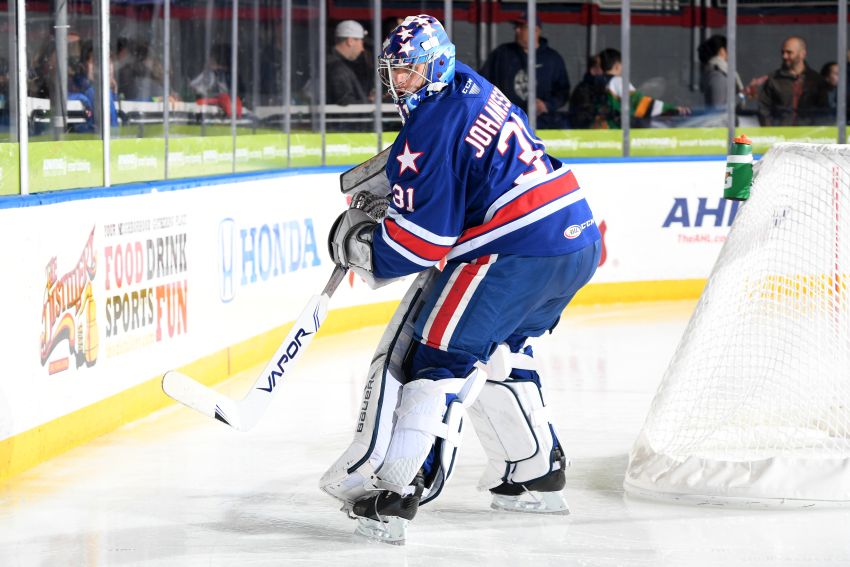 BUFFALO – On Monday, goalie Jonas Johansson represented the Rochester Americans at the AHL All-Star Classic, an honor he received for his breakout season.

Johansson, 24, had earned his first recall to the Sabres. Having lost Linus Ullmark to a lower-body injury for three to four weeks in Tuesday’s 5-2 home loss to the Ottawa Senators, they needed another goalie.

Right away, Johansson called his parents in Sweden, where it was around 5 a.m. At first, his mother, Ulrica, was a little upset he phoned so early.

“They were tired, they just woke up,” Johansson said following Wednesday’s practice inside KeyBank Center. “But, no, they were really happy.”

When Johansson called his parents, he said it hit him he was going up to the NHL.

“That’s something you only had in your dreams before, now it became a reality,” he said. “So that was a really nice moment.”

Johansson, who will likely back up Carter Hutton tonight at home against the Montreal Canadiens, said the previous two days had been “intense.”

“But I’m just really pumped, I’m enjoying it,” he said.

He added: “I’m just trying to take it all in now.”

The 6-foot-5, 219-pound Johansson is often overshadowed by Ukko-Pekka Luukkonen, a youngster labeled by many observers as the Sabres’ goalie of the future. Still, Johansson has established himself as a strong NHL prospect.

Johansson, a third-round pick in 2014, 61st overall, spent most of the last two seasons with the Cincinnati Cyclones, playing 54 games for the ECHL affiliate. He underwent season-ending surgery to repair a torn meniscus last February, ending a strong campaign.

When this season started, he had only played 19 AHL games.

But Johansson has quietly developed into one of the AHL’s best goalies, forming a strong partnership with veteran Andrew Hammond.

“Me and Hammond, we’ve been working really close, helping each other out, doing goalie drills with each other,” said Johansson, who arrived in North America late in the 2016-17 season. “I think I just found good habits in practices and game days. It’s been working fine.”

Johansson has compiled a terrific 13-3-3 record with a 2.19 goals-against average, a .919 save percentage and two shutouts in 20 games this season. He recently enjoyed a nine-game winning streak.

“It’s more than anything psychologically how he’s grown and developed thus far this season,” Sabres coach Ralph Krueger said of what he has seen from Johansson. “It’s a good opportunity to get to know each other. It’s nothing against Hammond.”

To replace Johansson, the Amerks recalled Luukkonen from Cincinnati.