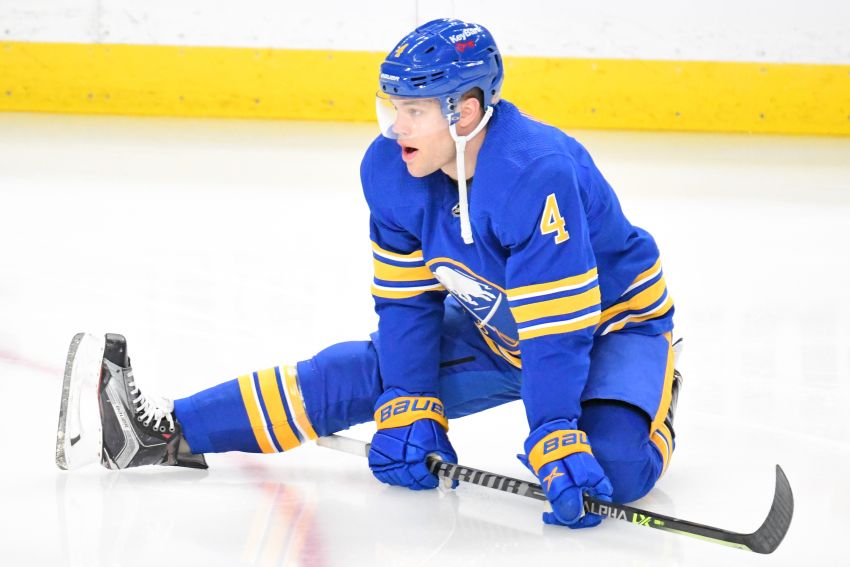 Taylor Hall has a no-movement clause in his contract. ©2021, Micheline Veluvolu

In October, before winger Taylor Hall signed a one-year, $8 million contract with the Buffalo Sabres, he said he was “really close” to joining the Boston Bruins as a free agent.

“I was ready to be a Bruin and just some other things kind of didn’t work out,” Hall said on a Zoom call Monday morning hours after being traded to the Bruins. “But it was not like any hard feelings or anything like that.”

So when it became apparent the Sabres would deal Hall – they just endured an embarrassing 18-game winless streak – the Bruins became the No. 1 team on his list of potential destinations.

The no-movement clause in Hall’s contract effectively allowed him to control his future before this afternoon’s trade deadline.

“Definitely the no-move really helped me become a Bruin,” Hall said. “It’s been a team, since I knew that I would be traded for the last few weeks, it was a team that I really wanted to join and really wanted to be a part of.”

Sabres general manager Kevyn Adams acknowledged the no-movement clause limited him to only working with the Bruins.

“Taylor was very professional and respectful and he said, ‘I want to play for the Boston Bruins,’ and that’s the right he had,” Adams said. “I understand it. They’re a good hockey team and they’ve been a good team with a lot of players for years.”

Having played just 14 playoff games in his first 10 seasons, Hall  has experienced a lot of losing in his career.

As Hall, 29, sat out the Sabres’ last four games – they wanted to protect him from getting injured – he said he spent time reflecting.

The 2017-18 Hart Trophy winner has looked awful this season, compiling just two goals, 19 points and a wretched minus-21 rating in 37 games. Still, he said he believes in himself. His confidence has been shaken, not shattered.

“I feel like I can add things to a team,” Hall said.

Hall, of course, is grateful Adams worked to get him an opportunity to pursue a championship.

The Sabres received an underwhelming return for a player three years removed from an MVP season. They packaged center Curtis Lazar with Hall in exchange for forward Anders Bjork and a second-round pick in 2021. The Sabres also retained half of Hall’s salary, according to The Athletic’s Pierre LeBrun.

“Kevyn Adams … was just fantastic in the way that he treated me and the way that he went about the situation knowing that I wanted to play for a chance to win the Stanley Cup,” Hall said. “He worked it out to a team that I really wanted to go to. I’ll always be thankful to him for that. Him as a hockey guy and as a person, I have a lot of respect for him.”

Hall said he would “love to be a Bruin for a few years.”

“It’s been a bad year for me personally, and I need to play well,” he said. “I need to contribute, and most of all I want to be part of a team that wins games. I really believe that we can do that here. That’s just my main goal. There’s been a lot of distractions this year, a lot of things that really haven’t gone well and confidence-wise the team here in Buffalo just never got off to the right foot.

“I think the best way to get confidence is to be a part of a winning team and to make yourself part of the bigger solution.”

Hall spoke on a Zoom from Buffalo. After the session, he said he planned to drive to Boston, where the Bruins, coincidentally, host the Sabres on Tuesday.

He said he will be available to face the Sabres, a team he never thought would become the NHL’s laughingstock.

“Everyone came into this season with expectations that we would do a lot better than we did,” he said. “I don’t think anyone expected us to win the Stanley Cup, but I thought that we would be maybe flirting with a playoff spot, probably ultimately end up on the outside looking in. But I thought we could really build something maybe for the upcoming years.”