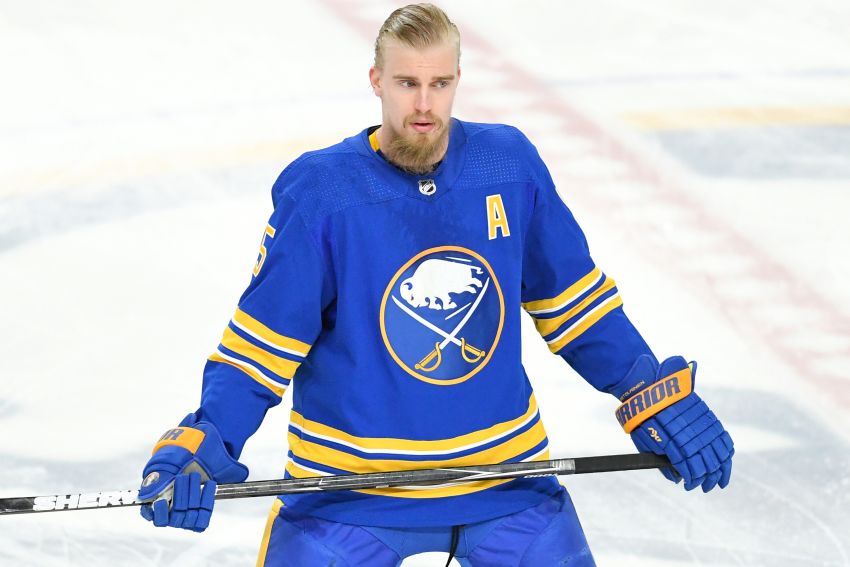 The constant losing and turmoil – Ristolainen played for a whopping six coaches and four general mangers, stunning numbers that illustrate the Sabres’ futility – wore on him. The straight-shooting Finn often voiced his frustration.

On Friday afternoon, hours before the Sabres picked Michigan defenseman Owen Power first overall at the NHL Draft, Ristolainen finally received a fresh start. The Sabres traded him to the Philadelphia Flyers in exchange for the 14th pick Friday, a 2023 second-round selection and defenseman Robert Hagg.

He added: “When you change coaches and then you changes GMs every year or every other year, it’s hard to build something.”

Trading Ristolainen, 26, will likely the first of several big moves general manager Kevyn Adams makes as he tries to overhaul a team that has missed the playoffs an NHL record-tying 10 straight seasons. Captain Jack Eichel, the face of the franchise and the Sabres’ most dynamic player, and center Sam Reinhart could also be dealt soon.

Adams got off to a strong start, landing a huge package for Ristolainen, who has one year left on his contract before he can become an unrestricted free agent.

“I really like him as a person, as a player,” Adams said early Saturday morning inside KeyBank Center. “But … we have to look at every possible scenario and how does that affect us in the short kind of term and in the longer term look at things? And we felt that although Rasmus has been a very good Buffalo Sabre and done a lot of good things in this organization, the value that we got warranted us making that decision.”

After the Sabres finished 31st last season, it appeared Ristolainen would be moved. On May 10, he said he was open to being traded or staying in Buffalo.

“I was just home enjoying my Friday night and I got a call from Kevyn Adams telling me I was traded,” Ristolainen said. “So I was obviously a little bit surprised, but I knew that something might happen this offseason and this weekend.”

Ristolainen, the eighth pick in 2013, acknowledged he had been thinking about a move for a few years. In Philadelphia, he could finally have a chance to compete for a spot in the postseason and perhaps play his first NHL playoff game.

He ranks second among active NHL players in games played (542) without a playoff appearance, trailing only Sabres winger Jeff Skinner (773).

“I’m at my best is when I play meaningful games and I see myself as a playoff type of player,” Ristolainen said.

Still, Ristolainen, who has compiled a ghastly minus-164 over his career, understands he could’ve done more to help the Sabres.

“We had really tough years in Buffalo,” he said. “Obviously, I played a big part. I was one of the leaders there and we couldn’t make the playoffs, so that’s not good. … I’m now very excited to go to Philadelphia. I’m going to do anything I can to help the team make the playoffs and have a run there.”

The Sabres ran the 6-foot-4, 221-pound Ristolainen ragged for years, playing him more than 24 minutes a game for four straight seasons. But they trimmed his ice time over the past two years, skating him about four less minutes and putting him in better situations to succeed.

He responded by enjoying arguably his two best season. After registering a wretched minus-41 in 2018-19, he whittled that number to minus-2 a year later.

Ristolainen has no problem being part of an ensemble blue line. The Flyers also acquired Ryan Ellis, another right-shot defenseman, earlier this week.

“All I care is to win, and I don’t care what my role will be,” Ristolainen said. “I just try to do anything I can to help the team win.”

The Flyers’ interest in Ristolainen dated back to at least the 2019 offseason, when GM Chuck Fletcher said he talked to ex-Sabres GM Jason Botterill about acquiring him.

They paid a steep price for who can become an unrestricted free agent following the season, but Fletcher said he wanted to add a competitive, right-shot defender. He said the Sabres did not retain any of Ristolainen’s $5.4 million salary.

Fletcher said the Flyers had to send Hagg, who has one season remaining on his two-year, $3.2 million contract, to Buffalo to make the deal work.

Ristolainen has compiled 46 goals, 245 points and 291 penalty minutes in his NHL career.

The Flyers drafted Hagg in the second round in 2013, 41st overall.

“This is a contract year for him,” Fletcher said. “There may have been a little bit of uncertainty as to what his role would’ve been with this club this year. For us, it allowed us to make the cap work. And for him, it gives hopefully an opportunity to play more minutes in a very important year for his career.

“He was a heart-and-soul guy. He blocked shots, he killed penalties. He was a very popular teammate and somebody that earned the respect of everybody in the organization.”