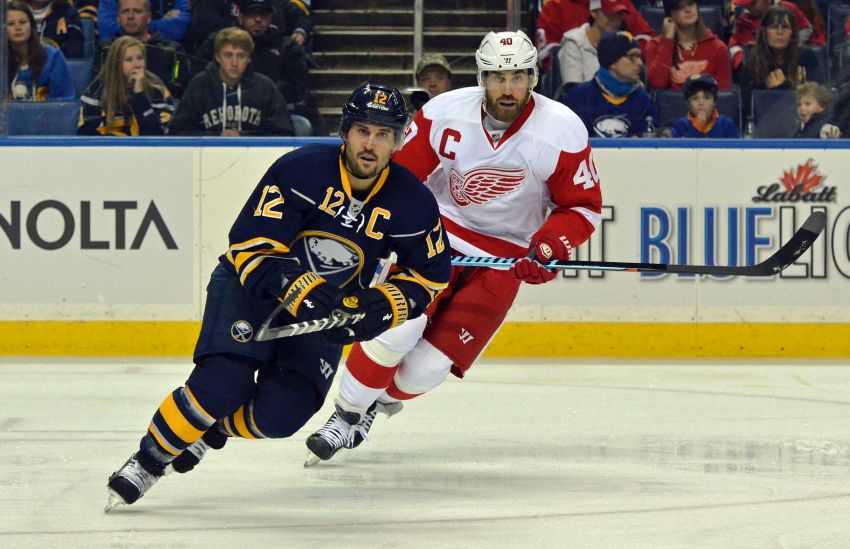 BUFFALO – Tonight’s not about feeling nostalgic. Sure, respected Sabres veterans Brian Gionta and Josh Gorges enjoyed some specials years with the Montreal Canadiens. Gionta captained the storied franchise. Gorges was their heart and soul.

But these days, despite two wins in their last five games, the rebuilding Sabres are struggling badly. Tonight’s game, the first tilt against the Canadiens this season, can’t be overshadowed by Gionta and Gorges facing their old team.

“At the end of the day, (tonight) is two points on the line for us to put two wins together, which we haven’t done this year,” Gorges said Tuesday inside the First Niagara Center. “It’s something we got to focus on, and that’s where our heads are at.”

The game certainly has some meaning in Montreal. Even though the Canadiens hosted Chicago on Tuesday, some French-Canadian media outlets arrived in Buffalo a day early.

On what would normally be a quiet early-season practice day, Gionta and Gorges spoke to a throng of reporters.

“It’s no different than when we play against other teams in the league, guys I’ve played with before, guys I grew up with, played junior with – all different types of things,” Gorges said. “You know these guys personally, but when the puck drops, they’re wearing a different color jersey than you are.”

Gionta, the Sabres’ new captain, said he hadn’t thought much about playing the Canadiens.

“The first time’s always the toughest,” he said. “ … It will be nice to get it behind me.”

Deep down, the game probably holds a lot of meaning for the players. Gionta, 35, spent five seasons in Montreal, the last four as captain. Gorges, 30, played eight seasons.

The Canadiens let them go following a 100-point season in which they reached the Eastern Conference final. They traded a devastated Gorges on July 1, hours before the Sabres signed Gionta.

“It’s good friends, it’s memories,” Gionta said. “You’ve been there five years. You build a lot of friendships and stuff. At the same time, it’s a new chapter and you’re excited to kind of go out there and play against them.”

“As a team right now, we can’t be thinking about winning it for anybody but ourselves,” Nolan said.

Gorges shot down a question about him still having a hard time over leaving Montreal.

“No, I mean, my team is here in Buffalo,” the defenseman said. “That’s where my focus is. That’s where my head is at. Things have happened in the past you have no control on, so there’s no sense in thinking about what-ifs or what could’ve been. The focus is on today, here and now.”

The veterans have endured a rough on-ice acclimation to the Sabres. The team, which won a 3-2 shootout Sunday against Detroit, is just 3-9-1 and has scored 14 goals. Gionta has zero goals and one point in 13 games, his worst offensive start ever.

“He’s struggling like our whole team struggled in the beginning, but we’re all kind of coming out of it together,” Nolan said about Gionta. “I thought the last little while he has a little bit more jump. It’s a lot of weight put on peoples’ shoulders, especially when you come from a different team and expectations and pressures involved with being a captain – all those type of things. It takes a little while.”

He added: “I didn’t mean struggle. It’s just that he had to find his footing. He’s finding it right now, I think.”

In Saturday’s disastrous 5-0 loss in Pittsburgh, Gionta got the puck all alone in front with no Penguins around him, then shot it over the net.

The winger then looked up in disgust.

“Last few games I’ve had some good chances, just either missed the net or kind of trying to get too precise with things,” Gionta said. “For the most part, I feel good about my game except getting on the score sheet.”

Meanwhile, Gorges, an alternate captain, has had a bigger on-ice impact, blocking an NHL-high 56 shots.

Both players, Nolan said, have given the Sabres the leadership he expected they would.

“No question,” he said. “The way we started wasn’t the way we wanted to start. But their character and leadership hasn’t faltered, hasn’t changed. We all got to step up in the same mold. They’re doing a great job for us.”