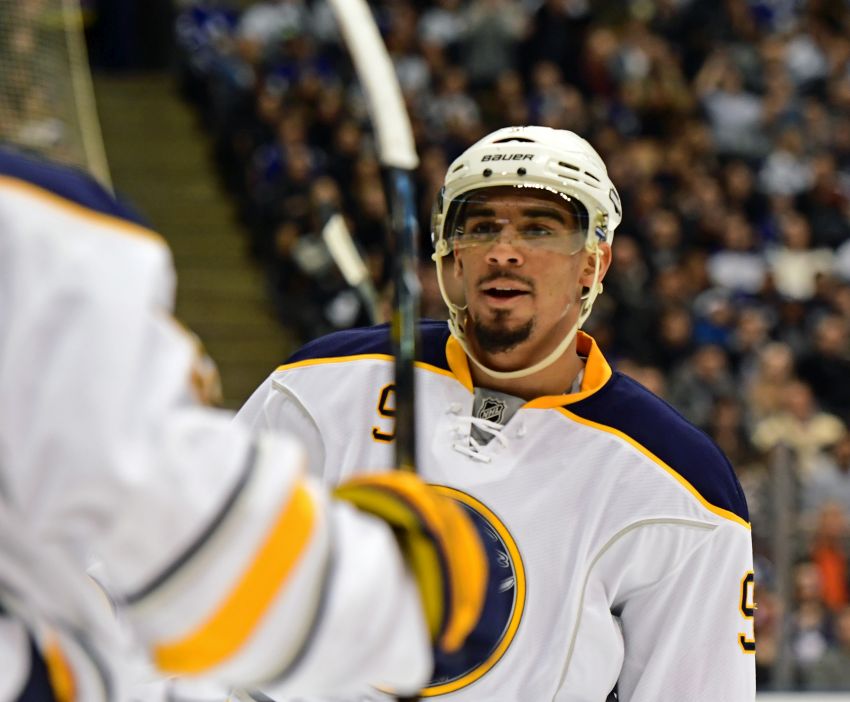 TORONTO – For nine weeks, as Evander Kane quietly morphed into one of the NHL’s hottest players, the Buffalo Sabres winger did most of his scoring on the third line, without the benefit of a top center.

So what could Kane do if he, say, played regularly with a slick pivot? Well, Saturday at the Air Canada Centre, Kane gave a pretty good demonstration.

Teamed up with center Jack Eichel again, Kane scored twice in first period, helping the Sabres jump out to a 3-0 first-period lead in their 3-1 win against the Maple Leafs before 19,427 fans.

“Just another game,” said Kane, who has five two-goal outings this season.

Kane has 18 goals in his last 32 games, 17 at even strength. Remember, Kane broke four ribs opening night and struggled after returning. He didn’t score until Dec. 3, his 13th appearance.

“Even after he came after three weeks, you’re still dealing with that (injury) for a good portion of time,” Sabre coach Dan Bylsma said. “I think once he got rid of that time frame and got back to skating the way he can, bringing the speed, the physicality, you’ve seen his game from Dec. 1 on really elevate.”

Kane, who went back beside Eichel last week, said he hasn’t felt this good in years “in terms of staying healthy and having some games and getting in a groove and not being … held back by injury.”

The 25-year-old made it 3-0 at 18:02, unleashing a wicked one-timer from the left circle off Eichel’s feed from down low.

“The third one was one I really liked,” Bylsma said. “It’s not an area he gets in and sits in.”

Eichel added: “He’s got a great shot, so he gets open and he lets it go.”

In between, Sam Reinhart scored on the power play at 5:08, connecting on Kyle Okposo’s nifty pass as he zoomed to the net. Eichel started the play, so he enjoyed his first three-assist game in the NHL.

Kane twice missed two empty nets in the final minute or so.

“I’m leading the league in two-goal games by a player with no hat tricks,” Kane said. “I definitely appreciate the boys trying to get it for me.”

Saturday’s win, the Sabres’ 23rd this season, was massive. It moved them to within five points of the fourth-place Leafs, who fell out of the Atlantic Division’s final playoff spot.

As expected, the high-scoring Leafs, who rallied from a two-goal deficit to beat the Sabres 4-3 on Jan. 17, fought back following their wretched start. Despite pumping their first shot on Sabres goalie Robin Lehner 9:07 into game, they outshot the Sabres 13-10 in the first period and 44-23 overall.

“We came out hard,” Eichel said. “We executed our game plan. We jumped on them early and we were rewarded for it. I think the next 40 we did enough to win the game. That’s what’s important.”

The Sabres host the Vancouver Canucks tonight at KeyBank Center.