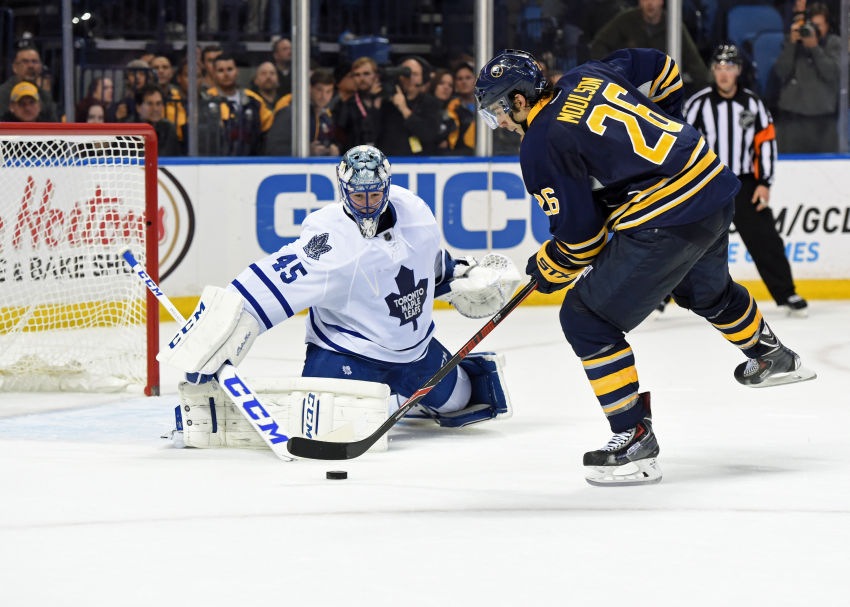 BUFFALO – Technically, way back on opening night, Sabres winger Evander Kane experienced the joy of scoring a goal. Of course, it was short-lived.

An offside call negated it, and Kane, who boldly stated last month he wanted to score 40 or 50 times with his new team this season, spent the next five games struggling to get his first.

Kane finally scored that elusive goal late in the Sabres’ 2-1 shootout win against the Toronto Maple Leafs on Wednesday, a game in which he was arguably the best player on the ice and reminded everyone what a lethal presence – both offensively and physically – he can be at times.

Heck, if he can keep replicating that performance, his lofty goal might not seem so unreasonable.

“It was nice that it wasn’t disallowed this time and it stood as a valid goal, which was a good feeling,” said Kane, who whistled a wicked wrist shot by Leafs goalie Jonathan Bernier 15:31 into the third period after Nazem Kadri turned the puck over.

Kane nearly won it on a two-on-one in the Sabres’ first three-on-three overtime. But the game reached a shootout, and after the Leafs’ PA Parenteau and Tyler Ennis traded goals, Matt Moulson secured just the Sabres’ second win.

It took the Sabres, who couldn’t convert a slew of great chances in Saturday’s 2-1 loss in Tampa Bay, 33 shots to finally beat Bernier.

“What a good win for us,” Ennis said. “We battled. We deserved that goal. We earned a lot of chances. Bernier played well, but we stuck in there and got a huge win.”

Kane, who hadn’t scored since Jan. 21 with Winnipeg, was a strong presence all night, skating 22 minutes, five seconds and taking a game-high seven shots. He leveled Leafs captain Dion Phaneuf earlier in the third period, making the defenseman bleed and bringing a roar from the Sabres faction in the bipartisan crowd of 17,762 fans inside the First Niagara Center.

“He’s been working hard,” Ennis said about Kane. “He’s been getting on the forecheck hitting. He plays with a lot of energy, and he deserved that goal tonight.”

The Sabres, despite outshooting their opponent four times, have only 10 goals all season, so Kane’s hardly alone.

“He’s had a lot of chances,” said Sabres rookie Jack Eichel, Kane’s center. “It’s early in the season, it’s a long year. So far, we’ve had a little bit of troubling finding the back of the net. I think we’re getting our chances but we need to bear down a little bit more. It’s good to see him get the first one, hopefully it’ll open the floodgates for him.”

Only Parenteau’s deflection in front on the Leafs’ first shot 1:28 into the game beat him.

“Johnny gave us a chance, Johnny made some big saves and stood in there in the shootout,” Ennis said.

As expected, three-on-three overtime, a new addition this season, was wildly entertaining but perhaps slower than expected. With so much ice and the game on the line, the teams tried to be cautious, often retreating to be safe.

“That was my first few reps at it … so it was new to me,” Ennis said. “I thought we could’ve played a little faster. We kind of sat back a little bit.”

Bylsma added: “We remarked coming in it was a lot more controlled and slower. … It was fairly controlled. … You’re looking for just kind of one turnover to explode out of there.”