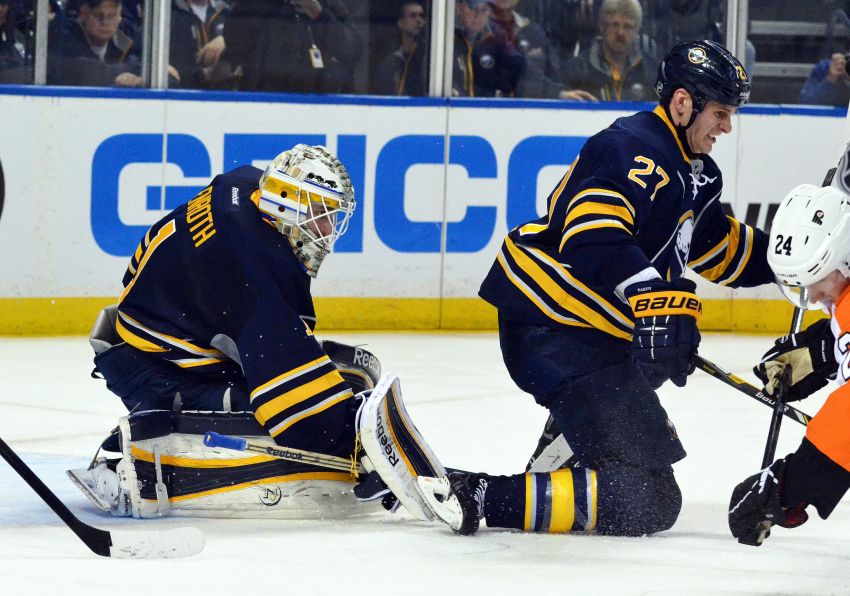 BUFFALO – Sure, the Sabres needed some good fortune to down the Philadelphia Flyers 1-0 on Saturday afternoon. Christian Ehrhoff’s pass off the end boards created the game’s only goal. Daniel Briere hit the crossbar behind Sabres goalie Jhonas Enroth with just a single tick left in the game.

Still, they deserved their 17th win this season and first in three games. The Sabres, so vile during Thursday’s 5-1 home loss to Montreal, earned their breaks before the capacity crowd of 19,070 fans inside the First Niagara Center.

“I’m going to stick with ‘good,’” Enroth said when asked if the Sabres performed good and were a little fortunate. “I think we worked very hard … so I think we deserved the luck.”

What changed in less than two days?

“I thought our competitive nature was way better tonight than it was the other night,” interim Sabres coach Ron Rolston said. “Guys, you could just tell they were ready and they’re competing. I thought we were competing defensively. Our sticks in our zone were exceptional.”

Enroth played exceptionally, making 29 saves in his third NHL shutout. The Swede was at his best late, stopping 11 shots in the third period, including several key stops in the waning minutes.

Could Enroth’s performance change Rolston’s goaltending plan? Could Ryan Miller get a second day off when the Sabres host the Tampa Bay Lightning tonight?

“We haven’t talked about it,” Rolston said. “It’s possible.”

The Sabres must check Enroth’s health first. The 24-year-old backup hurt his neck late when a teammate hit him. After spending a minute with trainer Tim Macre, Enroth decided to stay in the game.

“It’s a little bit sore right now … but I’m sure it’s going to be fine,” said Enroth, who was going to be examined.

Enroth was possibly playing for his job March 7. He hadn’t won a game in nearly 16 months and was down to perhaps his final chance after two poor starts this season.

His strong effort that night in New Jersey has kept earning him regular action. Enroth has three wins and has allowed only eight goals in his five recent starts. His save percentage is a gaudy .951 in that span.

“He’s been really sharp, focused,” Rolston said. “He’s been tracking the puck extremely well and just finding those second pucks around the crease.”

Does Enroth feel like he’s back on top of his game?

“I think I was playing pretty much the same,” he said. “I had two bad games this year, so I don’t know.”

Ehrhoff provided Enroth’s only goal support 17 seconds into the third period, when his hard pass from the left point missed Steve Ott beside the net, bounced out and hit Flyers goalie Steve Mason.

“We want to try to get more pucks at the net,” Ehrhoff said. “When they do a good job being in the shooting lane, especially in tight game where you don’t want to hit shin pads and have them come the other way, sometimes you just try to get it off the end boards back in front.”

With only 40 points, the Sabres’ playoff chances are still microscopic. Agitator Patrick Kaleta, who fought Oliver Lauridsen ferociously early on, said the 12th-place club will keep fighting until the bitter end.

“Everyone still believes, and that’s the way we’ve got to play,” Kaleta said. “There’s no give up. There’s not a chance in hell that we’re going to quit.”

Rolston switched up his lines, moving struggling center Tyler Ennis back to the left wing, a position he played until late last season, beside center Cody Hodgson and Thomas Vanek.

“(I’m) just trying to find a different mix right now,” Rolston said. “Marcus actually played center in juniors. We’ve been really impressed with Marcus just in the faceoff circle. He’s pretty strong and wins a lot of draws. … He’s a big body, which we really don’t have in the middle.”

With only six games left, the Sabres plan to keep experimenting.

“I think guys understand where we’re at,” Rolston said. “They have to do anything they can to make us successful. That might mean moving to a different spot.”

General manager Darcy Regier said top prospect Mikhail Grigorenko, whose junior season with the Quebec Remparts just ended, will either report back the Sabres or go to Rochester in a day or so. The 18-year-old center played 22 NHL games earlier this season.

Briere returned from a 10-game absence (concussion) Saturday. The 35-year-old former Sabres star told the Philadelphia media last week he’s aware the Flyers could buy him out following the season.